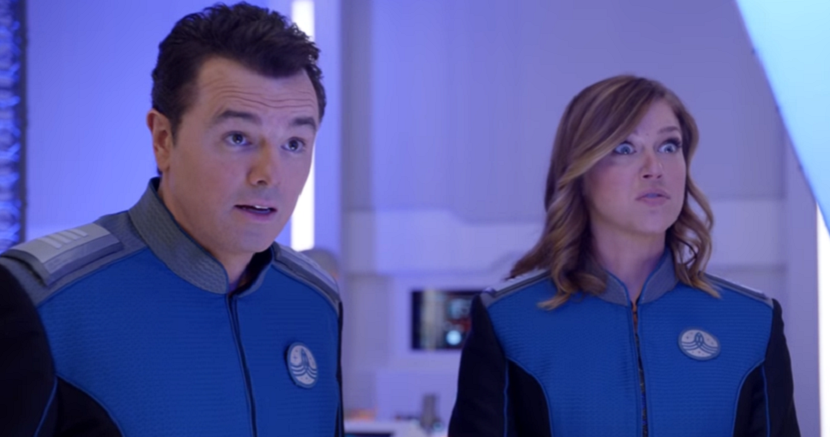 With the TV Upfronts happening this week in New York, networks are releasing loads of trailers for their upcoming new shows. Naturally, a few of them attract more curiosity than others, though that doesn’t mean those shows will eventually warrant the attention.

But Seth McFarlane captaining a starship and possibly invoking his inner William Shatner/Captain Kirk? That raises an eyebrow, Vulcan-style.

The Orville may be notable for being McFarlane’s first live-action comedy for Fox after creating Family Guy, American Dad and The Cleveland Show for the network. Most of his live-action stuff has been saved for the big screen (although McFarlane voiced a CGI teddy bear in Ted and its sequel). But after the awful A Million Ways to Die in the West, McFarlane is apparently jumping back to television with a Star Trek parody.

Fortunately, McFarlane isn’t going to be invoking Shatner for this show. That gimmick would’ve gotten old quickly, especially when everyone watching is going to make the Captain Kirk connection to McFarlane’s character Ed Mercer anyway.

However, The Orville may have come up with a clever play on Kirk’s friendship with Mr. Spock (something the J.J. Abrams movie franchise reboot has really focused on) by making the captain and his executive officer a divorced couple with plenty of emotional baggage to bring aboard the ship. Adrienne Palicki gets to flex some comedy muscles as Kelly Grayson, something we haven’t gotten to see her do much during her career outside of Robot Chicken. Now, she gets to be live-action funny. The rest of the cast and the characters they play look promising, as well. Norm McDonald voicing a blob-like alien? An alien species made up of a single sex? Beam us up!

Another intriguing aspect to The Orville is that we know McFarlane is a big science buff, thanks to the new version of Cosmos: A Spacetime Odyssey he produced for Fox in 2014. Cosmos was all about explaining the wonders of outer space and exploring what existed throughout the universe. This comedy potentially gives him the opportunity to scratch that science itch and maybe drop a little bit of knowledge, served up with a spoonful of comedy.

At the very least, Cosmos had some spectacular graphics and visual effects, so maybe we’ll see some of those features utilized on The Orville. Will Cosmos host Neil DeGrasse Tyson end up with a guest spot on this new comedy. He’d look great with a Klingon-style forehead or some Romulan-sized ears.

Can a series spoofing another TV show last? (Fox is banking on two such comedies with its X-Files parody, Ghosted.) That will surely depend on whether or not McFarlane and his team keep things funny. For those of us who have always wanted a sequel to 1999’s Galaxy Quest, this might be the next best thing. Never give up, never surrender!

No premiere date has yet been announced for The Orville, but its first season (with the pilot directed by Jon Favreau) will run for 13 episodes.