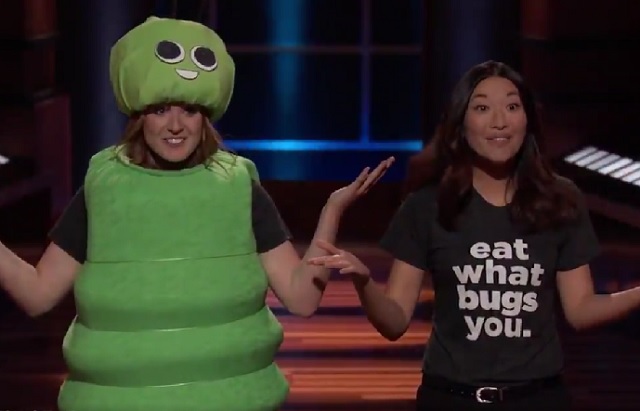 The Bait: Cricket chips, hi-fi earplugs, playcastles on demand and parks as a service.

D’Asaro and Wang start off their pitch the optimal way: By scaring the absolute crap out of the Sharks:

Wang knows her Shark Tank history; she wisely builds off Chapul’s successful cricket-flour pitch from Season 5. Each chip contains about one cricket’s worth of protein; each serving contains four grams of protein. But the Sharks aren’t quite buying that a corn chip with a little cricket flour in it is the endgame for Chirps.

As Wang describes, it’s sustainability: The amount of water, food and carbon burned to produce a pound of beef dwarf the resources required to generate a pound of cricket flour. But as Lori notes, there’s not actually that much cricket flour in Chirps:

If they can get people eating Chirps Chips, they open the door to a world of cricket products — it’s their “gateway bug,” har har. They just signed on with the two largest natural-food distributors in the U.S., they say, and think they can jump build their revenue from $200,000 to $1.5 million next year.

But Mister Wonderful is concerned: The snack market is incredibly competitive and well-established. How are they going to carve out shelf space? They’ll need a lot of capital and sales mojo to get in. Turns out, they’ve got it: they’ve won over $200,000 at pitch competitions. That’s a brilliant way to start a business!

Cuban jumps in: He’ll offer $100,000, for 20 percent. Lori immediately says Cuban would be a great partner for them and goes out. Cuban wants a counter if they’re going to counter, or an answer if not. They counter:

Swim or chum? It’s an incredibly quick and pain-free deal. SWIM, and turn up the SQUEEE to 11!

Should you buy? Nine times out of 10, any food product offered that’s sampled by the Sharks is given a little, “MMMM, THIS IS THE BEST [thing] I’VE EVER HAD!” We didn’t get any of that this time. SHOULD BUY at least once for the environment’s sake, but if you don’t like the chips and never buy them again, I won’t tell anybody.

“I love going to concerts, but that comes with a price,” Mann says. “I ended up rupturing one of my eardrums due to loud sound.” I can relate: I once was front row for a Kenny Wayne Shepherd concert and now there’s a Fender Twin Reverb where my brain should be.

Mann’s Vibes are sound-filtering earplugs, that attenuate sound evenly across all frequencies instead of just muffling. To prove his point, Mann brings out the McNasty Brass Band:

Now, this is not a new idea. In fact, Mister Wonderful carries a pair of a competing product around with him all the time — and they cost less than the Vibes’ $23.99 price point:

Mister Wonderful doubts that consumers will pay a big premium for discreet vs. neon styling; a mere $30,000 in sales over five months says he’s right.

In one of the most brilliantly insightful moments we’ve seen on the show, Sacca nails the fundamental problem with the product. Just watch this:

Cuban agrees: He runs a basketball arena that doubles as a concert hall, and the only way Vibes work is if you’re negotiating giveaway deals at individual venues — and with a $4 unit cost to manufacture, they aren’t cheap enough to give away. He’s out.

“I’m only going to make you one offer, says Mister Wonderful, “and I’m not interested in negotiating,” It’s for the full $100,000 but with a $2 per-unit royalty until he gets his money back. He’d also get a whopping 35 percent equity stake going forward. As a hobbyist musician who would gladly use and promote his product, O’Leary might be a perfect partner for Mann. But Mann wants nothing to do with a royalty deal.

Should you buy? Mann claims both a design and utility patent, but musicians and audiophiles know you’ve been able to get nearly identical products for much less, for years. SHOULD NOT BUY.

Remember when kids used to play and make forts and create stuff? Well GOSH, now they just PLAY ON SCREENS like SCREEN ZOMBIES.

Well, PopUp Play has a perfect solution: Let kids make play forts on tablets! No, seriously: Cosgrove and Thomas have built an on-demand manufacturing system where kids can build cardboard play forts and castles within an app, and then they automatically cut them, ship them and bill at a flat rate of $99 + $10 shipping.

They claim $330,000 in revenue in just under a year, including a $300,000 deal with a major automotive manufacturer. Well that’s cool — except, wait, what? Almost all of their sales ever are just one big business-to-business contract?

“That’s not good news,” says Mister Wonderful, and we are off to a DRAMATIC COMMERCIAL BREAK.

After a successful Kickstarter, we learn, PopUp Play spent $15,000 marketing to earn $15,000 and that ended up driving just $15,000 in sales. As Cuban immediately sees, that’s why we’re suddenly talking about business-to-business marketing:

The valuation’s too high, the model’s too iffy, after nearly a year they’re still basically pre-sales. Even so, they’ve already raised $300,000 on a $3,000,000 valuation — meaning the Sharks will probably have to pay an even higher premium.

In the midst of expressing their doubts, Cuban has a brainstorm: What are the limitations on the tech? Could kids make stuff within Minecraft and use a PopUp Play mod to export it to meatspace? The answer is yes: any sheet-based material (paper, wood, fabric, you name it) could be cut this way.

Just as Cuban raises this fascinating possibility, he goes out: He feels this takes them too far from their core competency, and turns them into a branding/sales/marketing/partnership company.

But Sacca sees real potential in the system, and he’s in — just not at the exorbitant premium the couple are trying to charge the Sharks:

They take a second — well, OK, something more like 22 seconds — to consider Sacca’s offer between themselves. I happened to be watching with closed captioning on, and underneath almost all of this was the tag “[indistinct whispering]”:

Swim or chum? With the word “sure,” the couple committed to developing their platform with Sacca’s investment and guidance. If they manage to expand the concept beyond cardboard play forts, the sky is truly the limit. SWIM.

Should you buy? The cardboard castles are nice, but if what’s about to happen with their tech ends up happening, you SHOULD BUY whatever wild custom stuff they dream up next.

The Barbara Corcoran biographical vignette might have been my favorite yet. She’s overcome a ton of adversity (just as her career was taking off, her boyfriend told her he was going to marry her secretary — woof), and yet she not only succeeded but dominated in an incredibly intense industry.

Apparently, it’s a special Luddite edition of Shark Tank! Staff and Davis insist that people want a place to unplug and get away from all their concerns, so they’ve established some special areas of wooded land with private cabins and fire pits and gosh, you can just go there and chill out and get away from it all.

But replace “campground cabin” with “tiny house,” I guess, and suddenly you have an on-trend startup instead of taxpayer-funded facilities that do exactly the same thing. Davis invites the Sharks to see it the other way: Rather than a premium campground experience, they’re selling it as a downshifted hotel.

“We get the same daily rate as a hotel,” $99 a night, “with half the overhead.” But a hotel is one contained building that’s relatively easy to maintain. These guys are going to be buying and building a thousand tiny houses over a huge amount of land, and Mister Wonderful doesn’t see how it scales:

They expect to sell $2.1 million worth next year, and $30 million in five years, over 30 cities. However, they’ve already raised $1.2 million in seed money on a $7 million valuation. Once again, they’ve come in with the idea that the Sharks will be under pressure to sweeten the pot even further, offering more money at a higher evaluation.

But has the business really proved it’s worth a premium? Mister Wonderful questions whether they can maintain the properties they’ve built out.

“You’re going to keep needing money from now until evermore,” Cuban says, “because you’re going to keep building and re-building the houses you’ve already built.” They’re comparing themselves to a hotel — at a $99-per-night flat rate, they’re charging like it. But while they save a lot of the upkeep costs of a gigantic, many-room building, they also can’t pull revenue or consistent occupancy like that building.

Right now, though, Getaway is making money, and that’s all Mister Wonderful cares about. He offers them a loan: $500,000 at 11 percent interest for a 2.5 percent equity stake.

Chris Sacca’s also intrigued, but also has misgivings. Hilariously, Staff invites him to “make amends” for helping bring Twitter into the world by backing Getaway:

These guys are hilarious. Even if you do count Twitter as an evil black mark upon our wretched society, asking a billionaire to invest in your company so he can undo all the damage he’s done to the world by investing in all the companies that made him a billionaire is… an interesting strategy.

Mister Wonderful is sick of sitting on a valid offer while they gab with Sacca. He gives them 10 seconds to take it or leave it:

The 10 seconds are up, O’Leary’s out, and as the only Shark left in the tank, Sacca suddenly wants THEM to sweeten the pot for HIM. Oh, the look on their faces as they realize the jig is up!

In one of the funnier “you just played yourself” moments this show’s ever had, Sacca’s now willing to throw in $500,000 on a convertible equity deal at the same valuation as their other investors. BUT he wants his note to convert after theirs. That means the other investors get X percent of the whole company, and he gets seven percent of whatever’s left AFTER the first round of investors take their bite. He’s then effectively getting more equity for his money — not a premium for being a later investor, as the entrepreneurs hoped, but a discount for being a Shark.

Swim or chum? They won’t (can’t?) screw over their other investors like that. CHUM. Hilariously, they believe they’ve taken a greater moral stand against… something? They just got chewed up and spit out by the Sharks:

Should you buy? Support your state and national parks, people. They have private cabins, too. DEFINITELY SHOULD NOT BUY.