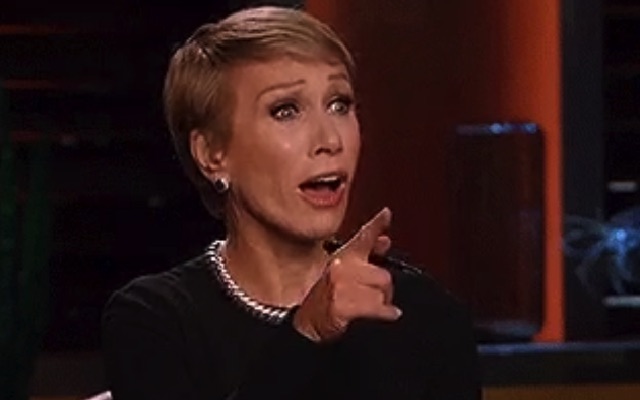 Blaine loves Christmas. Yeah, no, lots of people do — but she admits she “overdoes it,” and yeah, she sure does! Her holiday-themed business will be in the Tank just in time for her her first Christmas as a newly single mom.

Her business, Sealed by Santa, reverses the annual holiday tradition of kids sending letters to Santa Claus: You put a kid’s info into their online site, and the kid receives a letter FROM Santa, customized with their wish list!

Mister Wonderful wants to put Blaine on his “Something Wonderful” platform, a contact-sharing list for all his holiday and kid-themed businesses. Given the value his contact list can offer her, he offers the $150,000 for a whopping 33.3 percent equity stake.

She starts breaking down in tears.

This is really awkward and terrible.

“What,” asks Mister Wonderful, “my offer’s so good, you’re crying?” Brutal. I guess this is what we’re getting as a setup for our DRAMATIC COMMERCIAL BREAK, which is really more like an AWKWARD AND TERRIBLE commercial break.

I'm so confused by her tears and I didn't understand a word she said to Kevin through them. #SealedBySanta #SharkTank

When we come back, Blaine is unable to speak in anything but a weepy squeak. She tries her best to explain that to support her daughters, she can’t give up more than 25 percent of the company. Barbara does a wonderful thing, telling Blaine about a single-mom entrepreneur she’s worked with from this show… then lets her down gently; Barbara’s not investing. Cuban says he “sees some red flags” in her plans to expand to other holidays… though her mid-year warning letter is DEMENTED GENIUS:

Robert jumps in, offering her the $150,000 at the same 33.3 percent, but with the first $100,000 in profit every year going to her as an annual salary. Suddenly, Lori jumps in with a uncharacteristically complex deal: The $150,000, but $75,000 of it given as a loan, in return for a 22.5 percent equity stake AND a promise to underwrite inventory costs if Blaine is able to line up some retail buyers.

Suddenly, Blaine has three offers from which to choose. Instead of haggling or bargaining, she just picks her favorite.

Swim or chum? No surprise: It’s Lori, who gave Blaine an early Christmas gift of a low equity stake. SWIM.

Should you buy? This kind of cuts against the modern parenting trend, which is to sort of generally celebrate the idea of Santa, but not flat-out lie to your school-age kids for as long as you can keep them convinced. As a one-off cute thing, eh, but I feel like there are going to be kids scarred by getting two or three of these a year, every year. SHOULD NOT BUY.

Instead of the usual update on a previous Shark Tank business we get… a flattering mini-biopic on Mark Cuban? Something’s goofy with this episode’s programming.

When we come back, I immediately recognize this product: Synthetic indoor ice, designed so you can strap on your regular skates and practice on plastic instead of driving to the rink. My two oldest kids played ice sports for years, so I’m very familiar. However, the applications I’ve seen have always been off-ice training areas at rinks.

“Here’s what they don’t have: The scaled-down mini pack.” Loughran’s scaled the product down for home use, with much smaller interlocking segments and a plastic with an infused lubricant for a better feel.

Robert goes full Gordon Bombay and gives it a whirl:

Most people don’t have huge flat square areas of concrete where they can lay down big slabs of the stuff; Polyglide works much better in garages and basements. There are about six competitors online, and Loughran humbly admits he’s “in the top six.” His low-key, humble, Zamboni-driver personality isn’t playing well in the Tank.

Cuban’s out because he doesn’t believe in Loughran. Mister Wonderful doesn’t think he can scale, and neither does Lori.

Doesn’t matter how cool your product is if nobody buys it. Neat concept, impossible to scale if you ask me. #SharkTank

“I wish you came here with your hockey helmet on,” Barbara said, because he didn’t go hard enough for her tastes, either. Don’t forget: Sharks don’t just bite on products and companies when they invest in entrepreneurs; they’re starting close business partnerships with these people. They’ve got to believe in the people.

Should you buy? I very briefly looked into this stuff years ago, I quickly concluded the commercial products wouldn’t work. If you ever stress about the cost of ice time, you definitely SHOULD BUY.

Digital technology has revolutionized just about everything — but not wrapping paper, yet, I guess, so here we go!

“Digiwrap is about making gift-wrapping personal,” they say. “No one is doing small-run printing.” Mister Wonderful takes great umbrage at this. Digital printing certainly can print just about anything — but these two say you can get fully customized gift bags covered in your digital image in runs as small as one unit.

They have their own online site where they sell patented custom wrapping paper. But the one-off wrapping paper and gift bags, which are really eye-grabbing, are actually not their product. That’s Zazzle.com’s business, and with whom they’re partnered.

Mister Wonderful doesn’t buy it: How can they have gotten a patent for printing on tissue paper? The entrepreneurs insist they’re patent-protected, so okay, but they have a bigger problem: What they’re pitching is this complete line of digitally customized wrapping products, but what they’re actually doing is selling Zazzle tissue paper wholesale. The business opportunity is actually really limited.

“It’s a small, niche, crazy-chicken deal,” he says; if they’re in, they’re in. If not, whatever. The two suggest meeting him in the middle at 20 percent. Mister Wonderful points out that’s not the middle. He counters at 40 percent, they counter at 25… this isn’t going anywhere. But these entrepreneurs came prepared: They bring up a royalty deal! Mister Wonderful LOVES royalties.

#DigiWrap seems a bit crazy, but sometimes crazy pays off! Lots of people said I was nuts investing in @wkdgoodcupcakes too! #SharkTank

“You’re literally nickel-and-diming them,” says Robert, and I have to admit I laughed out loud. O’Leary’s not laughing: He wants an answer to his offer. Yes or no?

Should you buy? I frankly don’t get this. Wrapping paper and gift bags exist to look nice for five seconds and then get thrown away. I don’t need to spend a bunch of time and money putting a picture of myself on a gift bag I’m going to hand to someone else. SHOULD NOT BUY.

Now we get… uh. A NOT-DRAMATIC COMMERCIAL BREAK? The Cuban biopic has thrown this whole episode off.

Wildman is aptly named: He’s a grizzled 84-year-old dude who’s totally rocked up. He says he used to run a billion-dollar company, and he believes their gloves are going to dominate the “$8 billion glove industry.”

These skiing and snowboarding gloves have a very cool function: The fingers unzip and a wrist strap holds them back in place, allowing you full five-finger function without making you take off your gloves (and lose them, get them wet, etc.) The design is unique enough that they have a utility patent.

First-year sales were $15,000, in a handful of local stores. Now they’re in big-box retailer R.E.I., on Amazon and selling direct through their website, as well as in even more local stores. They made $125,000 last year, which is big growth, but not big sales.

The low-end model costs $11 to make, wholesales for $20 and retails for $40. The Pro model’s about three times as expensive, but Sullivan says his pair has lasted the entire time they’ve run the company.

Wildman comes clean on the billion-dollar thing: He used to run health-club giant Bally’s, and his $100 million net worth allowed him to take a lot of skiing holidays. That’s where he connected with Sullivan, who worked at a glove manufacturer, and the two of them made their mutual idea a reality.

The Sharks are loving this presentation! #SharkTank #HANDOUT pic.twitter.com/FOwY8ob1Tb

Barbara offers half the money they want, for 12.5 percent equity, and wants another Shark to come in with her to complete the deal. Cuban doesn’t see how this idea gets big enough with just the skiing market; he’s out. Mister Wonderful starts thinking about going head-to-head with the giants of skiwear… he thinks it’s going to cost him too much. He’s out.

So we’re down to just Barbara, and her half-offer. Wildman offers — and HI, YEAH I WAS WAITING FOR THIS, GUY WHO IS BASICALLY A SHARK ALREADY — to put in $300,000 of his own money in as capital, sweetening the pot. Barbara then offers a $300,000 line of credit for the cost of goods, at six percent interest, in return for a 25 percent equity stake.

Swim or chum? “We’d love to take that deal.” SWIM. Barbara, who was brazenly flirting with Wildman the whole time, takes the post-deal hug as an opportunity to get a little handsy:

Should you buy? If you’ve been skiing or snowboarding, you can see the appeal of these gloves. They’re not for everybody, but if you’re into it, you SHOULD BUY the high-end model. They look really well built.