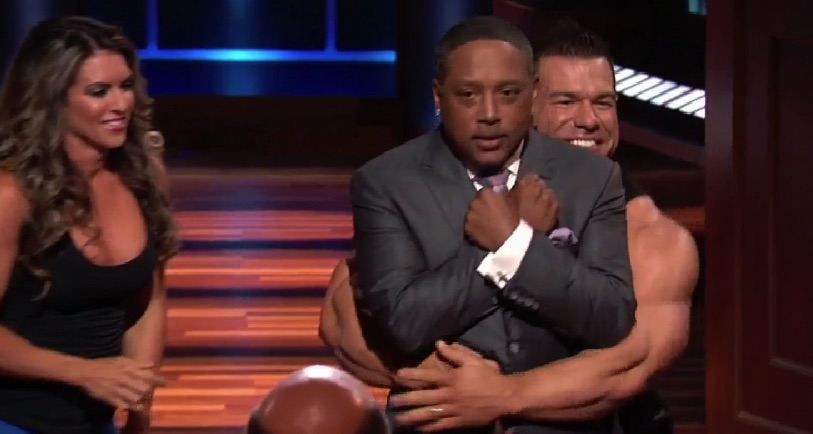 Two hockey moms got sick of trying to drink wine in places where fancy, fragile wine glasses are either unavailable or imprudent. The solution? A shatter-protected glass with a sippy cup they can take practically anywhere!

“The only portable wine glass with a drink-through lid,” the two momtepreneurs claim, Goverre adult sippy cups hold a hefty 17 ounces — half a bottle.

Their 1.5 million valuation isn’t unrealistic; they’re tracking towards $500,000 in sales for the year. Each glass sells for $24, despite a landed cost of $5.50. But the price point isn’t a problem, and they’re profitable: set to clear about $184,000 this year… but only because they’re not paying themselves yet.

The good news? They’ve got a strong pending patent on a drink-through lid for a concave glass, meaning nobody can make anything even vaguely wine-glass shaped that works like Goverre.

@Goverregirls This is great for folks with #disabilities like #CP and #Parkinsons! #SharkTank https://t.co/JGSwL4JlwS

“I’m a beer and vodka drinker,” Daymond says, and this just isn’t his thing. He’s out.

Mister Wonderful, though, is in: offers the $200,000 for 33.3 percent, which would make them all equal partners. As a well-established wine guy, Kevin O’Leary wants to get them into the big-box retail stores. Robert wants to jump in on a three-way deal with Mark and Lori.

“Oh, just to beat up on Kevin?!” Cuban exclaims. He and Lori are immediately in. After a quick three-shark huddle, they come up with a joint offer: $200,000 for 33.3 percent. That’s three Sharks getting 11.1 percent each:

Will they screw it up? DON’T SCREW IT UP!

Swim or chum? They don’t screw it up. “It’s always been our dream to be on Shark Tank, and we got a deal with three Sharks!” SWIM.

Should you buy? It’s a real wine glass you can really take anywhere, so if you really want to drink wine in all sorts of places you normally can’t or shouldn’t, then sure, SHOULD BUY. Otherwise… I don’t know.

This portable banner makes you a large, visible target if you’re lost at sea or in the woods:

Spotting an individual in the midst of vast wilderness is extremely difficult, even from a low-flying aircraft. As Yonover claims, the first thing many rescued folks say when they get rescued is, “Why did you fly over me three times?”

Inspired by a tragedy that befell his wife, Yonover developed this product, then sold the IP to the military for 15 years. After turning out $15 million in revenue over that time, he again owns the rights and not only wants to take it to the mass consumer market, but fight for its mandatory inclusion on all military life vests.

But Daymond can’t see how he can help Yonover secure government contracts; he’s out. Lori can’t see the product breaking into the consumer side; she’s out. This is not great news. Cuban explains the problem that this engineering product poses for a venture capitalist:

Will Mister Wonderful save the day?

Swim or chum? “It’s not for me,” he says; and Yonover is officially CHUM.

Should you buy? If you regularly boat, or often hike alone? Sure, SHOULD BUY. Otherwise, it’s pretty expensive and pretty big for a something that (thankfully!) you’ll almost certainly never use.

Booty Queen is a new athleisure apparel line envisioned and endorsed by Amanda Latona Kuclo, an international fitness champion. Over 18 months, they can boast fabulous glutes and $375,000 in sales.

Robert, Mister Wonderful and Cuban all immediately go out: the athleisure apparel space is incredibly competitive right now, and with nothing about these pants that lift, control, highlight or enhance (they’re a pure fashion proposition), they don’t want to get involved.

Amanda Kuclo tries to talk about Booty Queen as being not just these pants, but “all things booty,” but Lori jumps in to immediately tell them they’re wrong. Both Kuclo’s personality and their brand have real value:

“There are a million pairs of tights out there,” Daymond says, but he recently had a lot of success after acquiring a small brand with a big online following. Kuclo’s massive social footprint seems to hold the same promise; the couple did two separate pre-sales after an online teaser, and they sold out both times.

They’re clearly angling for Daymond, and after asking what they need the money for (inventory and an employee, they say), he nibbles on the line. He offers $250,000 for 33.3 percent, and they think it’s a little steep. They counter at 27.5 percent, but Daymond says he’s already come down from his initial thought of a 50/50 split. He reiterates that he’s only in if they’re three equal partners, and suddenly it’s yes-or-no time.

I had to make an offer – the power of the booty compelled me! #SharkTank #BootyQueenApparel

Swim or chum? “You got yourself a deal!” SWIM.

Should you buy? If you’re in the market and you like the look of these, cool. You SHOULD BUY. Otherwise, you have plenty of other options.

We all carry expensive and hard-to-replace items all the time, this pitch starts, and they’re extremely vulnerable to attacks and theft:

The “most extreme” RFID-jamming fabric available, LocTote is a drawstring-style backpack that’s hilariously strong. A bunch of advanced fibers put together in proprietary weaves, manufactured in America and designed to be lock-it-and-leave it secure, this unusual satchel solves a problem most backpack-wearers realize they have.

Between a six-figure Kickstarter and six-figure Indiegogo, they’ve put together $1.4 million in sales. Since then, product redevelopment and overseas manufacturing has dropped their manufacturing cost from $75 per bag all the way down below $15.

“I still don’t understand the fundamental application,” Robert says. He just doesn’t believe people will lock up their bags and leave them hanging while they go do stuff.

But overseas customers really respond to its slash-proof design. Apparently, thieves elsewhere are often slashing open backpacks that are still on people’s backs and taking their stuff. Above all, Robert says, he believes this is a nice-on-paper idea that won’t compete in the cutthroat world of outdoor gear. He quotes an MMA legend who was, Robert didn’t seem to know, quoting Mike Tyson: “Everybody has a plan until they get punched in the mouth.”

Halpern says he does know about getting punched in the mouth: Four weeks ago, he was diagnosed with cancer. He wasn’t sure he’d be able to pitch. He’s had two surgeries in the intervening month; against the advice of his doctors, he flew to pitch meeting with Walmart before flying into the Tank.

Lori likes it, but she’s got a competing lock-up device and she doesn’t see an advantage to this all-in-one solution. Mister Wonderful, though, is willing to take a flier:

“Retail is a whole different deal,” Mister Wonderful says, and Cuban agrees. He encourages the two to stick with the online-sales model that’s working for them. Halpern decides to counter with all the same terms, except the royalty would come off as soon as the initial investment of $150,000 was recouped.

Swim or chum? Say what? SWIM?? What?! After going out, then standing aside and watching the other Sharks battle it out, Robert jumps in on O’Leary’s negotiation and immediately steals it!

Should you buy? This doesn’t have any real application for me, but a soccer fan going to watch the U.S. Men’s National Team play Honduras in San Pedro Sula (the most violent city in the world) absolutely SHOULD BUY.