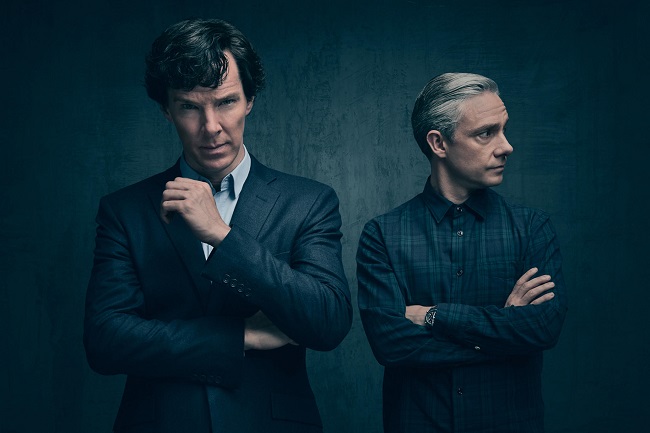 Well, that Sherlock finale was certainly something. But was it good? Let’s discuss.

Sherlock’s season 4 finale (ominously bearing the title “The Final Problem,” a nod to the Arthur Conan Doyle tale that saw Sherlock Holmes’ original literary demise) wrapped the season up tightly, if not satisfactorily.

Here’s what happened, and it’s fairly spoiler-ish from here on in:

Last week’s cliffhanger ending was essentially ignored, as this week’s cold open begins with a young girl waking up on an airliner, the only conscious person on-board. A cell phone rings. She answers, only to hear a familiar voice on the other end of the line:

Hello! My name’s Jim Moriarty. Welcome to the final problem.

It’s an effective opener, for sure, and suitably creepy. After the credits, the creepiness doubles, as we visit Mycroft’s house, which is apparently being invaded by Eurus Holmes. Doors lock. A creepy girl dashes through the halls. A clown somehow comes to life and threatens Mycroft with a sword. (Mycroft’s umbrella having been revealed as concealing a blade of its own, and then a gun — which is kind of cool, if a bit Kingsman.)

Then Sherlock breaks in, Mycroft begs for help, and Sherlock reveals it was all a ruse to force Mycroft to admit they have a long-lost sister.

I break all of this down, because it’s the first of many times this particular installment of Sherlock will craft an interesting setup, ratchet up the tension, and then undercut everything and move on, without acknowledging anything we’ve just seen.

This is an incredibly frustrating element to the show, and though Sherlock is certainly not afraid to frustrate its audience, a few things pop up here that are indeed nearly too much to ignore. (Nothing quite approaches the myriad explanations for Sherlock’s survival back in “The Empty Hearse,” however.) Mycroft details the story of Eurus to Sherlock and John, in a fairly effective scene. (Indeed, Mark Gatiss was in peak form as Mycroft, getting to do far more than the show had ever previously allowed him to do.)

It turns out their sister (who we’re told is a genius on a level far beyond even Mycroft) has been held at an island fortress prison, in nearly complete isolation, after a tragic event from their childhood. But if that’s true, who visited Sherlock and who was John’s therapist who fired a gun at him at the end of last week’s episode? (Oh, about that cliffhanger: it’s explained away having been a tranquilizer dart, in a tossed-off line about six minutes into the episode. Again with the undercutting.)

“The roads we walk have demons beneath. And yours have been waiting for a very long time”. #Sherlock ‘The Final Problem’. BBC1 9pm.

The three of them visit Sherrinford, the aforementioned island, It’s a name that’s popped up multiple times this season. After infiltrating, they discover that Eurus was indeed able to leave, because as a master manipulator, she has in fact broken the minds of every one of her captors and kept up appearances while expanding her own influence.

That influence includes a history with Moriarty, and the few minutes we get in flashback with Andrew Scott are some of the highlights of the episode. This series misses him so much, as Scott brings a particular sense of barely-tamped-down chaos we’re hard-pressed to find anywhere else on television.

This was Mycroft’s doing as well, allowing for a five-minute, unsupervised conversation between Eurus and Moriarty, in which Eurus apparently offered plenty of the Holmes family backstory, which Moriarty then used to torment Sherlock.

But, in the meantime, Eurus imprisons our three heroes, forcing them through a series of grim, Saw-like tests, much darker than most anything else you’re likely to find on PBS. Let’s just say that people die. Eurus treats the entire thing as an experiment, monitoring from a removed location, while injecting various obstacles or changing the rules as they go along. (Much like the showrunners themselves, really.)

There’s a great scene where, for a moment, the three men believe Sherlock will have to murder one of them. Mycroft points out the logical thing would be for John to die, as any further puzzles would best be attacked by the Holmes brothers. Watson, ever the good soldier, agrees. Sherlock understandably hesitates, prompting Mycroft to needle him, insulting Sherlock and John incessantly.

Sherlock then points out to John that Mycroft is only being kind, as he knows Sherlock has to kill his own brother, and he’s trying to make it easier for it to happen. Along with all we’ve learned about how Mycroft has attempted to protect Sherlock from some particularly dark memories his entire life, this season has gone a long way towards humanizing the elder Holmes, and Gatiss does wonderful work. (As do Freeman and Cumberbatch, of course, though that’s a given.)

So. That’s the basic setup, and though I could break down every single detail, I think I’ve covered enough of the plot itself. As with anything Sherlock, the setup is where the meat is, anyway. I’ll just note the conclusion is okay, though a bit pat, the main mystery hurried through in order to get to a rushed epilogue. It does tap into the theme of the season, which has been the fallibility of memory, as well as Sherlock’s continued growth in the areas of emotional expression, and valuing family and friends.

It’s thematically consistent, generally well-made, and incredibly well-acted. The stakes are certainly high, and as this show might indeed be over, a victim of its own inspired casting (Cumberbatch and Freeman are tentpole movie stars now, a far cry from when the show first went into production seven years ago), there’s a welcome sense of tension. Anything can happen at the end of a series, and though this episode doesn’t exactly close the door on a future installment, there’s no doubt the ending is meant to serve as a possible finale.

Is it satisfying? Well, it’s Sherlock.