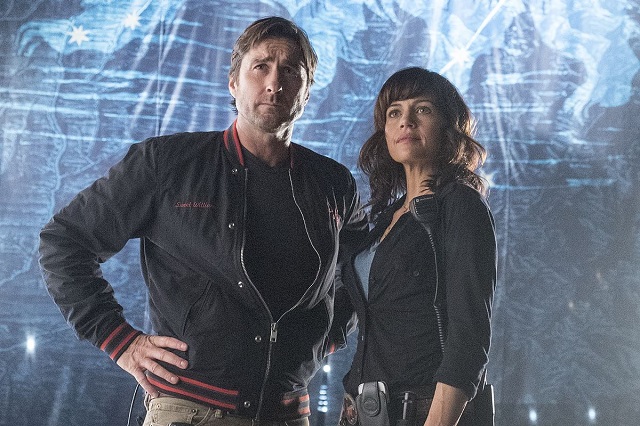 Just over a year ago, I jumped on the pile of critics slamming Cameron Crowe for his latest movie, Aloha. The final result confirmed fears that had been growing, largely due to remarks from emails that became public in the Sony Pictures hack, in which then-chairperson Amy Pascal said that the movie “makes no sense” and “never, not even once, ever works.

Pascal was right. Aloha was a mess. Casting Emma Stone as a part-Asian woman was only one of the film’s many problems. Ultimately, Crowe couldn’t figure out what the best story for the movie was, seemingly overwhelmed by too many characters and plotlines, and didn’t make the hard choices that writers and directors typically face. In light of Aloha‘s failure and the fact that Crowe hadn’t made a good film since 2000, I wondered if he was lost as a writer and director. He seemed caught in the trap of trying to repeat the success of Jerry Maguire and Almost Famous, trying to apply that same formula to different settings and characters.

But maybe what Crowe really needed is the right outlet for his storytelling. As mentioned, Aloha just had too many storylines and characters to fit into a two-hour movie, and when he tried to cram them all in, the entire story collapsed under its own weight. Yet that wouldn’t necessarily be a problem in a television series. Crowe could spread his story over eight to 10 episodes, giving each of his characters the attention they deserved and taking his plotlines where they needed to go.

It’s surely unfair to cast judgment after just one episode, but Crowe may have found the best place for the kind of stories he wants to tell on his new Showtime series, Roadies. First of all, this series allows Crowe to return to the scene of arguably his greatest success, following a rock band on tour and telling the stories of life on the road, along with all the fun, debauchery, heartache, tension and creativity that comes with being hugely successful musicians and trying to maintain some level of artistic integrity in the face of fame and wealth.

The difference between Almost Famous and Roadies is explained in the show’s title. This is about the people behind the scenes. You can almost think of this as The West Wing set in the world of rock ‘n’ roll, where the focus is more on the people behind the scenes, whom fans, observers and reporters typically don’t see, but whose role is of absolute importance in the daily, sometimes hourly success of a bureaucratic machine running smoothly. Without the road crew putting together the stage, running sound checks, putting together schedules, and negotiating with promoters, there is no tour. There is no way for a band to promote its music, reach its fans, and make as much money as possible.

At the very beginning of the pilot, a quote appears on screen: “I think the general public has no idea what roadies do.” This gives Crowe so much rich storytelling material to access. Some of us might know what roadies do more than others. To the majority of music lovers and concertgoers, I presume that roadies are mostly known as the people who accidentally get cheered when walking on stage to check or provide instruments and equipment. Oooh, someone’s coming on stage! Ah, it’s not the band; it’s just the roadie.

But the crew that travels with a band isn’t just the guys who put up the lights, build the stage, and check the levels on the instruments. The two featured characters in this story are Bill Hanson (Luke Wilson), the tour manager for The Staton-House Band, and Shelli (Carla Gugino), the production manager, both of whom are constantly putting out fires and catering to the star demands of their musicians (such as constantly finding a nanny for the lead singer’s rambunctious son). Bill and Shelli banter like a married couple, which leads virtually everyone to assume they’re in a relationship. But they’re not. Shelli is married to another production manager who works for Taylor Swift, and Bill frequently bangs any young girl he hooks up with on the road. 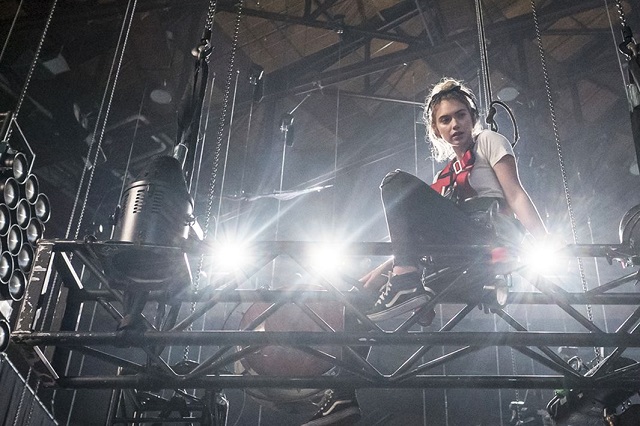 However, the soul of the series may be Kelly Ann (Imogen Poots), the young technician who truly loves rock ‘n’ roll and felt it was a calling to follow her favorite band on the road. But she’s become disillusioned with the business of the music industry and how it’s affected the music that once affected her so powerfully. She’s the closest thing Roadies has to Almost Famous‘ William Miller, the young, wide-eyed fan living what appears to be the dream, only to discover that musicians are people just like us, and fame tends to enable our worst, most selfish tendencies. As the story begins, Kelly Ann is ready to leave the tour and go to film school, though everyone is convinced that she won’t really leave.

You can probably guess what decision Kelly Ann makes, and maybe that’s the worst flaw of Roadies at least in its pilot episode. The story is rather predictable with characters filling familiar roles in a Cameron Crowe narrative. We even have a Jerry Maguire-type figure in Reg (Rafe Spall), whom the band’s management has brought in to cut costs and make the tour run more like a business. But is there a soul underneath that suit and all of his corporate-speak? Maybe the music will help him see the truth.

But Crowe’s work has always been about creating intriguing characters with compelling stories, and casting those roles with fantastic actors all too eager to play out his dialogue. (Crowe also has some creative firepower joining him in this production, with executive producers Winnie Holzman, creator of My So-Called Life, and J.J. Abrams, who’s become kind of a big thing.)

If Roadies works, it will be because of the show’s appealing cast. Wilson, Gugino and Poots certainly provide three strong leads to build a show around, but the cast has depth too, with Spall, Keisha Castle-Hughes (Whale Rider), comedian Ron White, and Peter Cambor (NCIS: Los Angeles). An added bonus, one that gives the show authenticity in addition to some great music, is the appearance of real-life bands throughout the series. The Head and the Heart show up in the pilot episode as the opening act in New Orleans for The Staton-House Band (who we never see play). But ultimately, we’ll have to fall in love with these characters as we did with those in Crowe’s best work. The potential for that certainly seems to be there.

Roadies premieres this Sunday, June 26, on Showtime at 10 p.m. But you can watch the full pilot episode online now.