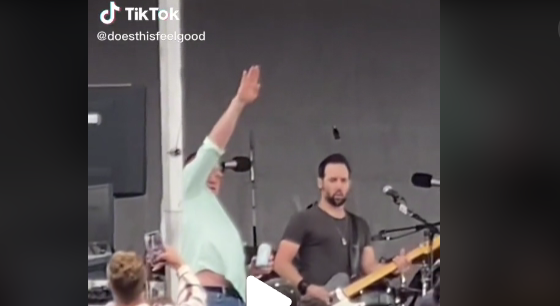 54-year-old Smash Mouth singer Steve Harwell is leaving the band, and that’s coming after wide online discussion of a TikTok video of him at their performance at the Big Sip beer festival in Bethel, New York Saturday. As per a piece on this from Rebecca Alter at Vulture, “Harwell appears to call someone in the crowd a ‘fucking nutbag,’ gives the audience the middle finger while yelling ‘Fuck you, bitches,’ says ‘I’ll fucking kill your whole family, I swear to God’ to no one in particular, and at one point appears to give a Nazi salute.” Here’s the original video:

Here’s more from Samantha Ibrahim of The New York Post, in a piece that included comments from Harwell’s representative and an unnamed “source close to Harwell.”

“Steve has been dealing with long-term medical issues over the last eight years and during his last performance at the Big Sip stage, he suffered numerous symptoms directly linked with his current medical situation,” [Harwell’s] rep said. “As of today, Steve will be retiring from Smash Mouth to focus on his physical and mental health.”

The source also explained that Harwell has suffered over the years with several types of addiction that led to several medical and mental health issues. His appearance at the Big Sip show made it clear that Harwell could “no longer perform due to the symptoms from his diagnosis,” according to the insider, despite having “every intention of successfully continuing in the band.”

As for the video in which he curses and seemingly does a Nazi salute, the insider claimed that Harwell has been a supporter for minority groups and he regrets his actions at the festival.

“This TikTok video is not an accurate representation of the man Steve is. Steve had every intention of successfully continuing in the band but will be retiring to concentrate on his serious health issues,” the source said.

Here’s more on those health issues from TMZ:

A source close to the band tells us … Steve knew it was time to hang it up after the show, because it’s impossible for him to keep performing as his health continues to deteriorate.

We’re told he was diagnosed with cardiomyopathy 8 years ago, which has led to other medical setbacks like heart failure and Wernicke’s encephalopathy … a condition that impacts his motor functions, including speech and memory. He’s also battled substance abuse over the years, which is further contributing to his health crisis.

Our sources say Steve was going through an episode during the live show, and it greatly impacted how he felt, at times not even understanding his surroundings.

A big question here is why Smash Mouth was still touring with Harwell amidst all these issues for him. If your lead singer doesn’t even “understand his surroundings,” that seems not ideal. (And it bears questioning why he would feel the need to give repeated Nazi salutes even if he didn’t quite know where he was.) As for the band, they reportedly plan to continue on. (It also may be interesting to see what happens with the @smashmouth Twitter account, which has been known for intervention in many sports stories, especially those around San Francisco and the Bay Area; lately, it’s just been tweeting throwback photos of the band.)

Smash Mouth may be most known for their 1999 hit “All Star,” and particularly for that song’s usage in 2001’s Shrek, but they’ve had a number of other strong moments over the years. Their high-charting singles include “All Star,” “Walkin’ On The Sun,” “I’m A Believer” (a Monkees’ cover), “Then The Morning Comes,” and more. It’s certainly notable to see Harwell (the only continuous member of the band other than bassist Paul De Lisle) exiting under these circumstances, and to see the role a TikTok video played in that.