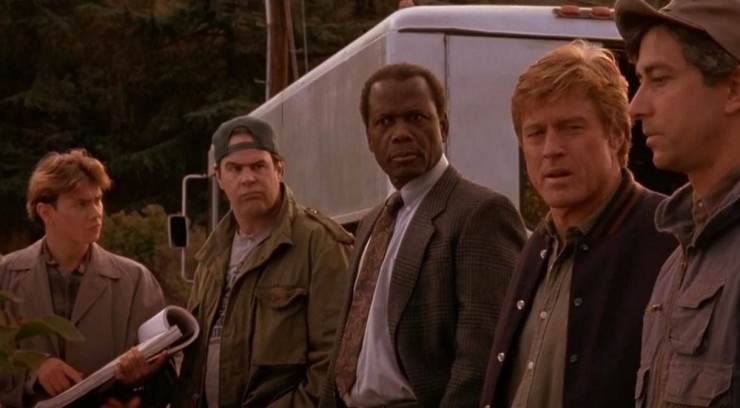 Too many secrets? Not anymore.

Unscramble that anagram, secure your data, and don’t trust anyone. It’s time to celebrate the 30th anniversary of the cult classic Sneakers.

This beloved film, released on Sept. 9, 1992, remains a one-of-a-kind favorite. Sneakers is a contradiction: simultaneously obscure and yet widely popular with its niche audience.

Even among cult flicks, Sneakers occupies a unique space.

Sneakers achieved cult status because it has developed a passionate fanbase that loves this nerdy brand of entertainment. It’s a heist movie. It’s a technology movie. But it’s also a fun movie. The Robert Redford cyber caper has grown in popularity with the recent influx of 90s nostalgia, and as younger viewers discover it for the first time.

Most importantly, Sneakers endures because it was far ahead of its time. The film’s villain, Cosmo (Ben Kingsley), issued the following warning to the protagonist, Martin (Redford), at a time before the internet was easily available to the general public:

“There’s a war out there, old friend. A world war. And it’s not about who’s got the most bullets. It’s about who controls the information. What we see and hear, how we work, what we think. It’s all about the information!”

Today, we look at that quote and shrug. But considering this was said in 1992, that’s astonishingly accurate forecasting. Sneakers predicted the rise and dangers of the instant-information age: how we would become overly reliant on devices, how data could be manipulated for nefarious reasons, how there is an ongoing battle over obtaining and controlling “what we see and hear, how we work, what we think.”

It is, indeed, all about the information. We are inundated with misinformation, fake news, and “alternative facts.” Never before in human history have we been this skeptical. Just because you see it on social media or traditional media, that doesn’t necessarily mean it’s true.

Sneakers, directed by Phil Alden Robinson, didn’t set out to be prophetic. It was just a movie of big ideas wrapped in fun packaging. Interestingly, Sneakers was written by Lawrence Lasker and Walter F. Parkes, the men behind the screenplay for WarGames (1983). That was another film that highlighted the perils of technology with a high school hacker nearly starting World War III.

Sneakers looked at a world that was largely unknown to most: teams that worked together to break into the secure computer systems of businesses, government agencies, banks, etc. The plot of Sneakers centered on a group of mostly middle-aged hackers who stress-tested these systems. What’s astonishing is the casting of the team: Redford, Sidney Poitier, Dan Aykroyd, David Strathairn, and River Phoenix. Of course, it takes more than star power to make an enjoyable movie. It takes chemistry, and these guys appear to be having so much fun.

You wanted to hang out with Martin. You wanted to hear about crazy conspiracy theories from Mother (Aykroyd). You wanted to see what else / who else was in the little black book of Carl’s (Phoenix). This was Ocean’s Eleven for geeks. Plus, look at the rest of the cast: James Earl Jones, Mary McDonnell, Stephen Tobolowsky, and Kingsley. A staggering collection of acting talent.

In the film, Martin’s group runs into trouble when it is coerced into stealing a mysterious box from a mathematician. This MacGuffin turns out to be a codebreaker allowing the user to penetrate any computer system. No more secrets. Sneakers is a story about secrets. Technology is used to safeguard them. But what if that tech could be used to access them or alter them? Encryption gives us the illusion of security, but we still regularly see news stories about leaks and data being compromised.

The trailer for Sneakers made it seem like more of a comic heist film but it’s so much more than that. Then again, the marketing of the movie did produce an awesome tagline: “We could tell you what it’s about. But then, of course, we’d have to kill you.”

A different approach probably would have yielded bigger box-office numbers. Still, Sneakers had a $10 million opening and made $51 domestically, according to Box Office Mojo. That’s a good return on a $23 million budget. And for those who missed seeing it in theatres, Sneakers got a second life thanks to DVD rentals, cable television, and later streaming. It found its audience.

Today, the technology in Sneakers is dated but its overall messages aren’t. Always verify information and be careful with your secrets.