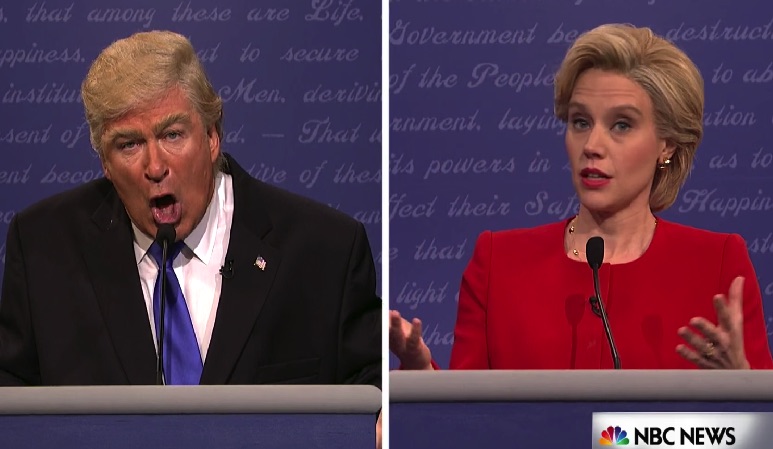 Even in a bad summer movie season — and by all accounts, this summer was one of the worst — an actor becomes a breakout star. This past summer, Margot Robbie starred in two of the bigger disappointments of the season, The Legend of Tarzan and Suicide Squad, and while her turn as Jane received some nice reviews, it was her portrayal of Harley Quinn in Suicide Squad that won over critics and fans, made Robbie a hot name in Hollywood, and Quinn a fixture for cosplayers at comic conventions nationwide.

Harley Quinn was so popular that Warner Bros. is developing her own spin-off movie with Robbie as executive producer, and more important to us here she was also asked to host the season premiere of Saturday Night Live. Robbie handled her first time hosting well, and this was a pretty solid return for the show. The election will definitely help the first month or so of the season, but the non-political material was also strong.

SNL released a video earlier this week that dropped the news that Alec Baldwin would be replacing Darrell Hammond as Donald Trump for the upcoming season. In his first appearance, Baldwin and the SNL writers portrayed Trump as a bigger egotistical misogynistic racist than they have in the past.

The debate material itself seemed to hit on all the points that were big on Twitter, including Trump’s late-night rant against former Miss Universe Alicia Machado a few days after the actual debate. Overall, it was a good start to the season, providing a look into how SNL will be handling episodes over the next month until the election is over.

Kate McKinnon easily had the best summer of any cast member with Ghostbusters and an Emmy win, and she carried that momentum over to the season premiere. It should not be surprising at all that McKinnon’s hilariously goofy Debette Goldry helped add Robbie to the list of hosts who “broke” while appearing with her. If McKinnon appears regularly as some random quirky old person, along with Hillary, it’s going to be a fun season.

This may not be the funniest sketch of the night, but the timing of it was somewhat interesting. By airing it immediately following a sketch centered around how confused everyone is that the beautiful Alexandra (Robbie) is married to a Croc-wearing, Kia Sportage-driving puppeteer named Matt Shatt (Mikey Day), SNL seemed to be letting us know that this episode would not be entirely focused on Robbie’s looks.

Colin Jost and Michael Che spent the majority of Weekend Update focused on the debate, but a longer bit about the Colin Kaepernick controversy helped give Update a strong start to the season. Kenan Thompson returned for possibly the last time as retiring Boston Red Sox slugger David Ortiz, but Cecily Strong’s appearance as undecided voter Cathy Anne was another amazing addition to her collection of odd characters, even if it was hard to understand most of what she was saying outside of “Hillary Hussien Clinton.”

Leslie Jones had a roller coaster of a summer; she co-starred in Ghostbusters, received a bunch of racist tweets from followers of grade-A jackass Milo Yiannopoulos, had the most fun of anyone on Twitter with the Olympics, and then had her computer hacked with personal info and pics posted to the internet. That last part is the focus of this Mr. Robot sketch where Leslie hires Elliot (Pete Davidson) to find out who hacked her computer.

** Day and Alex Moffat both made their debut in the Action 9 News sketch. Day and Moffat appeared multiple times throughout the episode, including literally popping up as the Trump brothers, Eric and Donald Jr., in the Family Feud sketch.

** The Weeknd performed “Starboy” and “False Alarm,” and also appeared once again with The Weeknd Update during Weekend Update. This time, he let us know that he cut his hair.