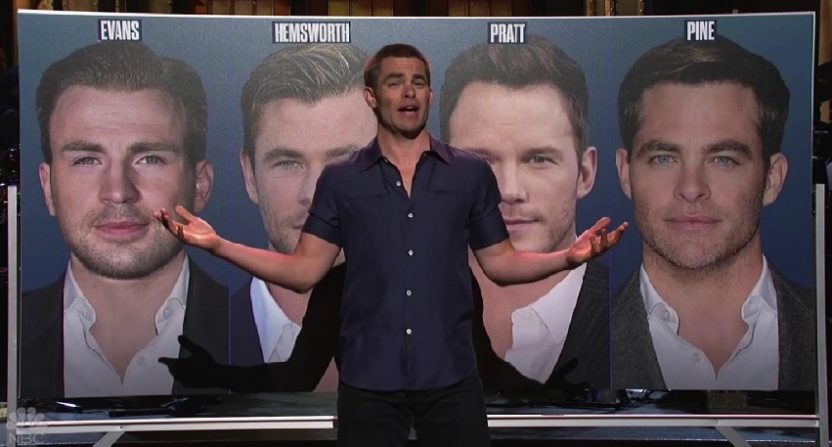 The possibility of a Writers Guild strike earlier this week had some wondering if Saturday Night Live aired its final episode of season 42 three weeks ago. Thankfully, a deal was reached early Tuesday morning, a strike was averted, and we’ll get to enjoy the final three episodes of this historic season starting with first-time host Chris Pine.

For the second episode in a row, SNL mostly stayed away from political sketches and Pine handled himself pretty well through a somewhat funny collection of sketches. This episode may not have had that one “water cooler” sketch, but it showed that while the focus has been on Washington most of this season, the SNL team can still put together a funny show without needing Trump to carry the load completely.

This week, Morning Joe hosts Joe Scarborough and Mika Brzezinski announced their engagement, ending long-time rumors about the couple’s relationship. This news gave SNL the opportunity to take a week off from a President Trump-focused cold open (though it did feature a phone call from Alec Baldwin as Trump “spokesperson”). Unfortunately, the shocked and creeped out Morning Joe panel didn’t do anything to bring the laughs, leading to a very dull open to the show.

For those worried about Baldwin returning as Trump, it has been confirmed that he will appear in the final two episodes of the season, but Baldwin has heavily hinted that these might be his final two appearances as Trump on SNL.

When Chris Hemsworth hosted in season 40, he appeared in this sketch, so it makes sense that SNL would want Pine to appear in the next installment to further confuse those of us who have trouble telling all of the Hollywood Chrises apart. SNL seems to have cooled a bit on the Good Neighbor sketches from Kyle Mooney and Beck Bennett this season, but they’ve always consistently delivered the laughs, so it was nice to see their awkwardness return.

Second-Best Sketch: Where in the World is Kellyanne Conway?

After becoming a star during the Trump campaign last year, Kellyanne Conway has slowly faded into the background since the inauguration. In this near-perfect Carmen Sandiego parody, SNL finds out that maybe no one wants to find Kellyanne.

After a long search, Update introduced their own meteorologist, Dawn Lazarus (Vanessa Bayer). Unfortunately, a nervous Lazarus completely botched her first appearance. Bayer was possibly the highlight of the night as she stumbled through Lazarus’s lines, but still somehow hit all the right inflections we all hear from meteorologists at the same time.

This season saw SNL cast its first Latina actress with Melissa Villaseñor, but the show still has never had an East Asian cast member. Driving the point home was this Star Trek parody that featured Chris Pine as William Shatner’s Kirk and Akria “Leo” Yoshimura as Sulu.

Yoshimura has been the production designer at SNL for the show’s entire run, and has appeared in numerous sketches over that time, including SNL’s first Star Trek parody during the first season. But it’s kind of insane that over 42 seasons, SNL has had to continually use their production designer to fill Asian roles in sketches instead of an Asian cast member.

** During an appearance on Ellen, Alec Baldwin revealed that SNL invited Trump to appear on the episode hosted by Baldwin in February. Obviously, Trump did not show up to Studio 8H, and if he did it most likely would have been a bad idea for everyone involved.

** Leslie Jones made an appearance during Pine’s monologue as he was attempting to explain the differences between himself and the other Chrises in movies. Before she left, she took a picture with the host and posted it to Twitter:

** An interesting tidbit about Sasheer Zamata: Her parents are Trekkies and named her after a crystal mentioned in the original series, so seeing her as Uhura must’ve been a thrill for them.

**Were you wondering about that odd “Song for Peace” sketch? It’s a parody of this 2003 video from Hungarian rapper, Speak: