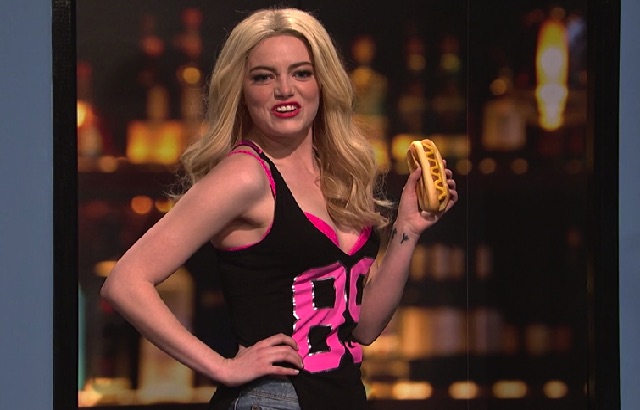 Few hosts enjoy their week at Saturday Night Live as much as Emma Stone. She’s been rather public about her childhood dream of becoming a cast member before those dreams were dashed by a successful movie career. As a consolation prize, Stone settled for hosting the show she loves twice, but it has been over five years since the last time she graced the stage at studio 8H.

Stone’s third hosting appearance is in the running for best show of the season. It was easily the most consistent from start to finish, with Stone holding her own throughout and showing that she should be regularly invited back. Maybe if La La Land bombs (early reviews make that unlikely), Stone will achieve her ultimate dream of becoming a cast member.

SNL has been accused this season of swiping jokes for its political cold opens from Twitter. But in their defense, it’s been more of SNL using popular trending topics for material. This week, they might have been a little more obvious in their use of Twitter by basing their entire cold open around the retweets of President-elect Trump.

The show and Alec Baldwin have definitely decided not to play nice with the president-elect, and Trump is making it pretty easy with the amount of material he gives comedians each week. Later in the night, Trump did a very presidential thing and went to Twitter to call a show he continues to watch “unwatchable”:

Pete Davidson is a student trying to study for an algebra test who falls asleep and dreams about getting help from his bedroom posters, featuring a snowboarder (Mikey Day), comedian (Kenan Thompson), video game hero (Kate McKinnon), and hot dog eating model (Stone). Stone is great as her attempts at linking math to eating hot dogs are basically her only talking about the size of the hot dogs.

McKinnon appears to have created another hilarious character in Debette Goldry, a veteran actress of a different era who shocks contemporary actresses with stories of the past. Earlier this season, she made host Margot Robbie “break,” and this time around no one, with the exception of guest Jennifer Aniston, made it through without cracking a smile, even McKinnon.

Update has been another segment that has blossomed in recent weeks, not only because of Trump, but the end of the election has allowed the Update writers to search for material outside of politics. Another strong Update was highlighted by an appearance from Jennifer Aniston, who interrupted Rachel from Friends (Vanessa Bayer). But once again, Leslie Jones stole the segment with her monologue about penises and the need for confident men. It’s a recurring theme for Leslie, but she makes it work every time.

This episode featured two funny gift sketches, a Fisher Price Well for the sensitive child in your life and this song about the dust-covered peach candle you found in your closet that is gifted and re-gifted forever.

** In Stone’s monologue, it’s revealed that she went to high school with Aidy Bryant. This is actually true. Both Bryant and Stone attended Xavier Prep in Phoenix, Arizona, but Stone dropped out to pursue acting her freshman year. That seems to have worked out.

** Followers of Leslie Jones on Twitter are aware of her recent love of soccer. During the good-byes, Jones was wearing a personalized Seattle Sounders jersey. The Sounders will face Toronto FC in the MLS Cup match on Saturday, Dec. 10.

** Hillary Clinton (McKinnon) made an appearance in a Finding Bigfoot-esque parody, “The Hunt for Hil.” Beck Bennett and Kyle Mooney are two experts working to find Clinton in the woods around Chappaqua, New York.