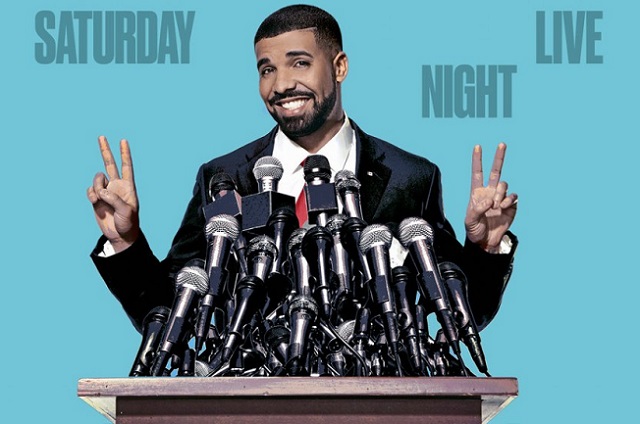 Occasionally, Saturday Night Live finds a host who makes the audience forget that they’re not actually a member of the cast. Over the years, hosts like Tom Hanks, Justin Timberlake, and Jon Hamm felt like extensions of the cast when they hosted, and not weak links during sketches.

After his second time hosting, Drake should now be considered a member of that group and should be asked to return whenever possible.

Clearly, the cast likes working with Drake, and the Canadian was great throughout his second time hosting, which helped SNL deliver another good episode before the season finale next week. Not everything worked, but nothing completely bombed either — mostly due to Drake, who as musical guest and host appeared in every segment of the evening after the cold open.

When Darrell Hammond agreed to be Donald Trump again, he probably wasn’t expecting the billionaire to actually win the Republican nomination. Unless the show makes a change during the summer break, he’s now looking at having the gig until at least November. Also, the transition of Bobby Moynihan’s Chris Christie from braggy loudmouth to scared lapdog is one of the best things to happen this season.

Jay Pharoah tends to make the most of his moments as a lead in sketches, and he was great as rental car store manager, DuJuan. Pharoah is known for his impressions, but the voices and mannerisms he creates for his characters can’t be overlooked. The interactions between Pharaoh and Drake throughout this sketch are some of the best moments of this episode.

The outcome of this sketch is obvious from the beginning when you have Bobby Moynihan as a Ninja Warrior competitor. But Moynihan sells each attempt so well, and the slo-mos are so perfect that it’s very funny. Now I just need to find out where to get one of those shirts with Moynihan’s face on it.

After an oddly bumpy segment last week, things got back on track in a big way with one of the best Updates of the season. Great appearances by Olya Povlatsky (Kate McKinnon) and Leslie Jones were topped by another ridiculous impression appearance by Jay Pharoah. Similar to his comedian meeting from a few months ago, Pharaoh worked his way through several impressions of rappers before a certain rapper/host interrupted.

A slight twist from the previous incarnations of this sketch, which had Louis C.K. and Elizabeth Banks appearing as out-of-place white people, featured Drake appearing as Jared, a black Canadian. Host Darnell Hayes (Kenan Thompson) was left stumped by Jared’s references to hockey player Jaromir Jagr and the Juno Award (aka the Canadian Grammys) winning rapper Kardinal Offishall.

During her Weekend Update segment, Leslie Jones revealed that she tore her MCL in last month’s “Shanice Goodwin: Ninja” sketch.

Lorne Michaels made an appearance during the “Drake’s Beef” sketch, which also had a couple of references to actor Josh Gad for some reason.

Saturday Night Live returns for its season finale on May 21 with host Fred Armisen and musical guest Courtney Barnett.