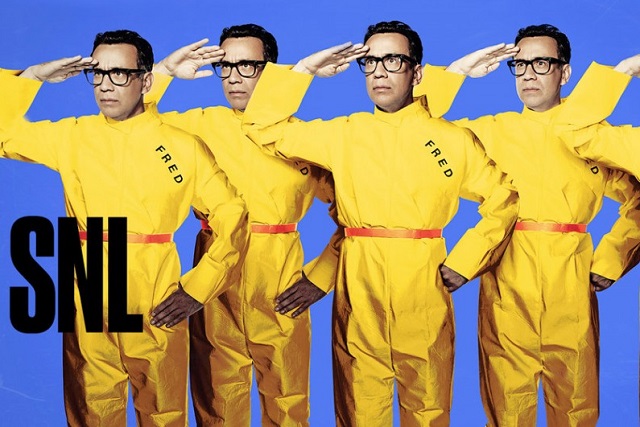 We’ve reached the end of the 41st season at Saturday Night Live and like every season, it had some ups and downs. But overall, this season felt like another step in the right direction for the show. The upcoming presidential election should help bolster the beginning of next season — and make Kate McKinnon a bonafide superstar — but before we start looking too far ahead, let’s recap a great season finale hosted by former cast member Fred Armisen.

Expectations for the season finale are always high, so when you combine it with a returning cast member, fans should be hoping for a great episode and they were not disappointed. This season finale had multiple guests, another appearance from Larry David’s Bernie Sanders, and the latest entry in Armisen’s fake band repertoire. Overall, the episode had great sketches and performances throughout, a rocking musical guest in Courtney Barnett, and a cast that seemed to be having a lot fun.

Could this have been last hurrah for Larry David’s Bernie Sanders? When SNL returns in the fall, we’ll be only a few weeks away from the election with presumably only Hillary Clinton and Donald Trump battling it out for the job, and while a third party candidate seems possible, Sanders will not be that candidate. Watching Clinton (Kate McKinnon) literally dance Sanders out of the studio to Tchaikovsky seems like a fitting end for that character.

SNL has had more than a few dark sketches this season (“Santa Baby,” “Totino’s Pizza Rolls”), but nothing beats this Dead Poets Society parody. In fact, this might be one of the best sketches of the season (and the past couple of seasons) for its sheer shock value alone, and Beck Bennett’s reading from page one of their “Crichard” textbook.

The students of the Woodbridge High School theater program have appeared several times over the past two seasons, and while the whole premise of this sketch should be wearing thin, it seems to get better every time. The inclusion of more reactions and snide remarks from the audience and parents (usually Vanessa Bayer and Kenan Thompson) in the crowd has made these great sketches even better.

Things are really, really bad in Brazil right now, which has led to President Rousseff being suspended from power after an impeachment vote that some are calling a “coup.” Rousseff (Maya Rudolph) stopped by the Update desk to discuss the country’s issues, the upcoming Olympics, and her haircut in one of the best segments on Update all season. Rudolph is always amazing and later this month, her new variety show with Martin Short, Maya & Marty, premieres on NBC.

Over his 11 seasons at SNL, Armisen created more than his share of fictional bands for the show from The Blue Jean Committee and Ian Rubbish to Garth & Kat and The Fingerlings. He added a new group to the list during the season finale, a southern rock band with about 20 members called the Harkin Brothers. The final sketch of the season featured every cast member, and all of the evening’s guests, joining in on a rendition of “Hot, Hot Summertime.”

A web-exclusive video featuring Armisen and Paul Simon at the New York Auto Show was posted to the NBC website. It is also a promo video for Simon’s new album, Stranger to Stranger, which will be released on June 3.

Armisen reprised his role as Regine, the rude girlfriend with over-the-top reactions, with former cast member Jason Sudeikis returning to SNL as her boyfriend. The sketch also featured a very rare “break” from Vanessa Bayer, which she acknowledged on Twitter:

Happy summer! What a fun season finale! Fred finally made me break!! #brokemystreak

Courtney Barnett’s Sometimes I Sit and Think, and Sometimes I Just Sit was my favorite album of 2015, so check out her performances of “Nobody Really Cares if You Don’t Go to The Party,” and “Pedestrian at Best” because they rocked.

Will Forte, Seth Meyers, former SNL writer John Solomon, and Sudeikis all contributed to an oral history of possibly the strangest/greatest sketch ever, “Potato Chip,” for writer Mike Ryan and Uproxx this week. Could we get a Forte-hosted episode next season, please?

Saturday Night Live returns sometime in the fall for season 42. Thanks for stopping by every week, and have a great summer.