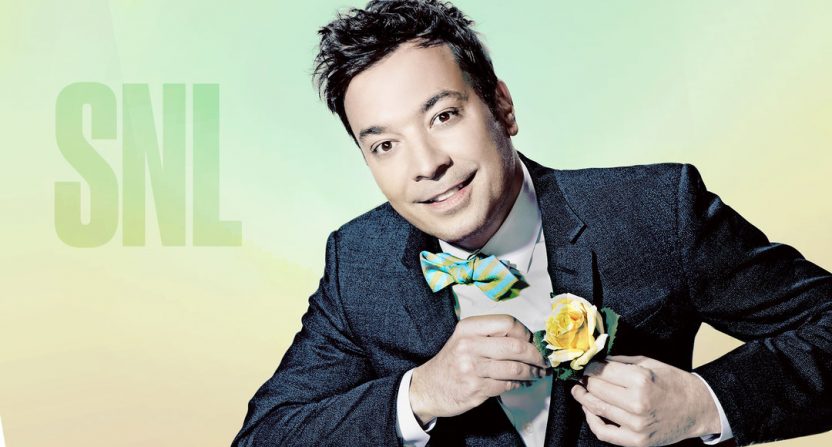 Last September, Jimmy Fallon had a grand old time laughing with and tousling the hair of Republican presidential nominee, Donald Trump. It was standard fare for Fallon on The Tonight Show, the late-night talk show circuit’s “safe zone,” but it drew the ire of critics for continuing to normalize a man who is anything but normal.

As Stephen Colbert, Seth Meyers, and Saturday Night Live turned up the rhetoric against Trump, Fallon stayed the course, continuing to be apolitical even as Colbert has siphoned viewers away from him by making deconstructing Trump a nightly occurrence on The Late Show.

While Fallon may be somewhat languishing, he’s still the perfect host for a historical event like Saturday Night Live‘s first coast-to-coast live episode because he is an extremely popular former cast member who has a built-in audience that knows what to expect. The question was whether Fallon would use his SNL appearance to change course at all by joining in the takedown of Trump, or would fans get the same cutesy act that has been endearing Fallon to fans for almost 20 years?

The answer was a little bit of both as Fallon didn’t partake in much of the anti-Trump humor this week, but the show also didn’t let off the gas too much either. It was nice to see the SNL cast having some fun after months of being stuck in political humor mode and overall, there was a vibrancy that has been missing as the show trudged along from crisis to crisis. For all of his flaws, Fallon does one thing really well, he has a lot of fun, and that really showed throughout this episode.

SNL and Alec Baldwin continue to build Trump into a dumb man-child similar to the show’s take on George W. Bush during his presidency. After a few cold opens that seemed to follow the trending topics of social media, SNL deviated a bit to focus on the rumored feud between Trump advisers Steve Bannon (Grim Reaper) and son-in-law Jared Kushner (Fallon) by having Trump choose one in a very reality show manner.

It helps that Spicer keeps feeding comedy gold to McCarthy and the SNL writers, and this week was no different with the absolutely absurd comments Spicer made about Adolf Hitler and Syrian President Bashar al-Assad.

Second-Best Sketch: Before The Show

One thing that the women of SNL have perfected in recent years is the awkward teenager. Vanessa Bayer, Aidy Bryant, and Kate McKinnon have been at the forefront of this movement, and are at center stage for this sketch about the moments backstage and during a middle school performance of Legally Blonde: The Musical. The backstage hype does not prepare anyone for the disaster that is about to happen on stage.

The often cut for time Bruce Chandling (Kyle Mooney) finally made another appearance on Update to joke about spring break, and his own body image issues.

Normally I pass over the Family Feud sketches because while they tend to be pretty funny, there’s not a lot of new territory covered. The cast and host bring out their best impressions and Kenan Thompson slays with his Steve Harvey; it’s pretty standard stuff.

But this time, Fallon changed the game by somehow portraying both 1977 and 2017 John Travolta. The Travolta impression wasn’t stellar, but the fact that Fallon ran from side to side (you can see him pass in front of the camera at one point) and changed a wig and wardrobe was pretty amazing. Musical guest Harry Styles also makes an appearance as 1977 Mick Jagger.

** Former cast member Jay Pharoah discussed his departure from SNL after last season on Hot 97 in New York this week. Pharoah said he was placed in an “impression box,” and that SNL “gave up” on featuring his Obama impression during his last year and a half on the show. Pharoah also covered the hiring of Sasheer Zamata and Leslie Jones, his willingness to say “no” while at SNL, and his respect for Lorne Michaels during the interview.

** Charlie Murphy, brother of former cast member Eddie Murphy, died this week of leukemia. While Charlie gained fame for his outrageous stories about Prince and Rick James on Chappelle’s Show, his first acting gig came at the end of his brother’s classic sketch from 1984, “White Like Me.”

** Harry Styles performed “Sign of the Times” and “Ever Since New York.” Styles also appeared during Fallon’s monologue (along with Nile Rodgers) to help him sing David Bowie’s “Let’s Dance,” and in one other sketch, “Civil War Soldiers.”

** Rachel Dratch returned to SNL to reprise her role as Denise aka Zazu, the now wife of Pat Sullivan aka Sully (Fallon). The couple were touring Harvard with their daughter (McKinnon).