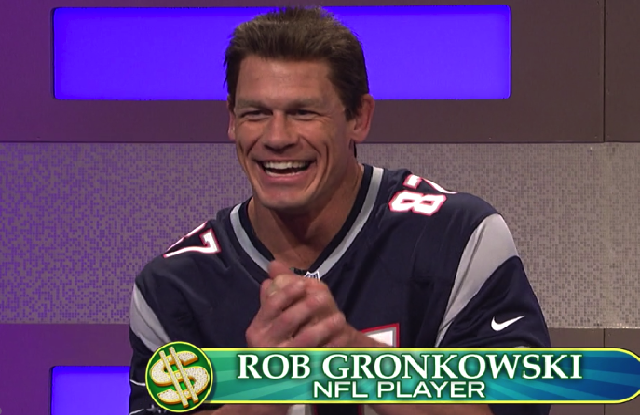 For the better part of a decade, John Cena has been the face of the WWE. However, over the past two years, the jort-wearing, 15-time champion has struck out from the squared circle in an attempt to duplicate the crossover success of Dwayne “The Rock” Johnson.

While Johnson used action films like The Mummy Returns and Walking Tall as his springboard to Hollywood, Cena has taken a decidedly different approach by appearing in comedies (Trainwreck and Sisters) and hosting ESPN’s annual award show The ESPYs this past summer.

Cena is also following in Johnson’s footsteps by hosting Saturday Night Live. Johnson has now hosted SNL four times since 2000, and while Cena’s first-time as host may not have been the funniest episode of the season, he did an admirable job as host. This season continues to show that SNL is rebounding well when a mostly forgettable episode is still far better than a majority of the episodes from just a couple of seasons ago.

This week, SNL opted for not having Alec Baldwin appear as President-elect Trump, and instead focused on Kate McKinnon’s funny, but not entirely accurate portrayal of Kellyanne Conway. The shortest cold open of the season (under four minutes) would’ve been completely uneventful without Bryan Cranston appearing as Trump’s pick to head the DEA, science teacher Walter White.

The first Dyke & Fats aired three seasons ago and since then, a cult following around the two-minute sketch has blossomed. Fans who have been waiting for a second installment of the 1970s cop drama parody were finally rewarded with another brief, but hilarious sketch featuring Chicago cops Les Dykawitz (Kate McKinnon) and Chubbina Fatzarelli (Aidy Bryant).

While Baldwin may not have been around to appear as Trump this week, it didn’t mean that SNL was going to let the president-elect off that easy. As the title says, this is a walk through a morning the way Trump (Cena) sees it with big hands, Hollywood stars forcing him to tweet, people asking for too much, and a dream sequence showing his one true love.

Colin Jost and Michael Che spent most of Update hitting Trump hard, but the biggest blow to him came from Cecily Strong’s Cathy Anne who said, “I know he’s watching,” after stammering through his name while talking about the “alt-right.”

Cathy Anne may be the Update character for the next four years, a replacement for Bobby Moynihan’s Drunk Uncle because now that everyone’s real uncle is drunk on the power Trump’s victory has given him, he doesn’t seem as funny anymore.

Best Impressions of The Night: Where’d Your Money Go?

The last person you would probably want to get financial advice from is Charles Barkley, but this sketch finds Barkley (Kenan Thompson) hosting a game show featuring NFL tight end Rob Gronkowski (Cena), UFC fighter Conor McGregor (Alex Moffat), and golfer John Daly (Moynihan) where all the answers are “no,” but not a single contestant can keep themselves from spending money on cheetahs and owning Asian fusion restaurants.

** Cena appeared on SNL in 2009 during the cold open for a Tracy Morgan hosted episode. In the cold open, Morgan punches out Cena to gain access to the studio.

** Maren Morris, who was nominated for four Grammy awards this week, performed “My Church” and “80s Mercedes.”

** Bobby Moynihan, Leslie Jones, and Kenan Thompson all appeared in the monologue as possible rivals to Cena with Thompson hitting him with a chair, Jones deciding to give him her hotel key, and Moynihan unveiling his alter-ego “The Waddler”: