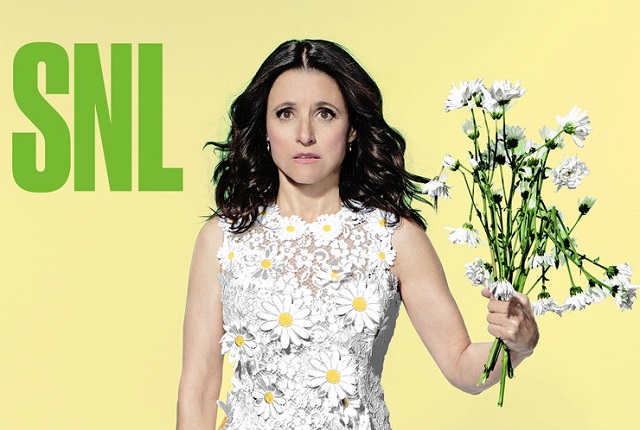 After two weeks featuring hosts not particularly known for their comedic chops in Peter Dinklage and Russell Crowe, Saturday Night Live returned to a familiar face in former cast member and comedy legend, Julia Louis-Dreyfus. Unlike Crowe last week, Louis-Dreyfus carried a heavy load by appearing in all but one sketch, and guided SNL into its final break of the season.

Even with the comedic talents of Louis-Dreyfus to work with, this was yet another hit-or-miss episode that was better than the previous two weeks, but could have been far worse with someone less talented as host. This season is starting to feel very similar to the drop in quality that occurred after the SNL40 show which had the show limping to the season finale. Here’s hoping things will pick up after the writers and cast have their last break this season.

Larry David made his fifth appearance as Senator Bernie Sanders in debate with Kate McKinnon’s Hillary Clinton. Louis-Dreyfus appeared as Elaine Benes to ask the candidates questions that led into a tiny homage to her and David’s work on Seinfeld, which actually kind of derailed a very nice cold open highlighting the fighting between the candidates and Clinton’s willingness to change her stance, or not to give one at all.

Louis-Dreyfus plays it straight in this pre-taped sketch that is stolen by Pete Davidson. There may not be a better role for Davidson than that of a doofus pool boy, and his delivery while Louis-Dreyfus’ bored housewife pours her heart out is perfect. Musical guest Nick Jonas makes an appearance as the new lawn guy.

A bakery owner (Vanessa Bayer) refuses to bake a wedding cake for a gay couple (Taran Killam and Jon Rudnitsky) in this spot-on parody of Christian films like God’s Not Dead and Do You Believe? Oddly placed in the 10-to-1 slot, this takedown of perceived persecution leading to anti-LGBTQ laws masked as religious freedom laws will be the most talked-about sketch of this episode once those viewers who didn’t stay up until 12:50am see it.

The One-Dimensional Female Character from a Male Driven Comedy made a return appearance to the Update desk with a bit that seemed to have a little more bite to it than her previous appearances. Also, her name is Heather. Did she have a name before this appearance?

One of the weirdest/creepiest sketches of the season had Louis-Dreyfus and McKinnon as two aliens who crash a Match.com event in an attempt to save their planet by finding men to impregnate them. With blacked out eyes, long stringy blonde hair, poofy-shouldered bridesmaid dresses and deep, eerie modified voices, a lot could have gone wrong here, but Louis-Dreyfus and McKinnon handled it all without a hitch.

Louis-Dreyfus’ Veep co-star Tony Hale appeared during her monologue. Also making an appearance during the clip from Troll was her husband and former SNL cast member, Brad Hall.

A political commercial for Speaker of the House Paul Ryan (Taran Killam) was cut for time, but posted to YouTube after Saturday’s episode.

The “Heroin AM” sketch may have reminded some MADtv fans of a commercial parody that show aired for “Heroin PM” in 2004.

** You can read all of our SNL recaps here.