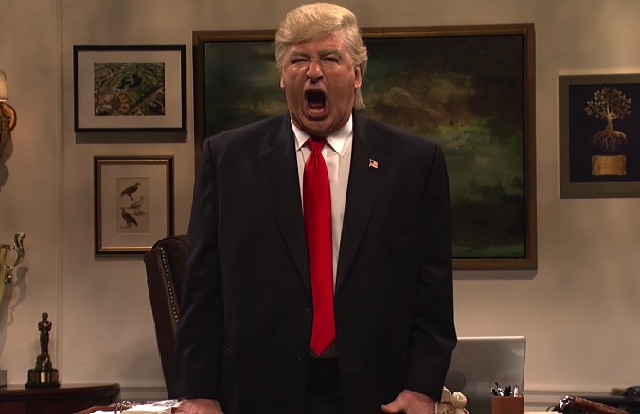 Through six episodes, Saturday Night Live is off to one of its best starts in years. The presidential election and Alec Baldwin as Donald Trump are a big reason for a ratings jump this season, but the show’s non-political material has also been stronger. Decisions during the summer like promoting writers Chris Kelly and Sara Schneider, the geniuses behind “Twin Bed,” to be co-head writers with Bryan Tucker, and even not bringing back Taran Killam and Jay Pharaoh, seem to be paying off.

The great ratings and strong sketches haven’t made it an easy season for SNL. Even before Trump’s win earlier this month, SNL was already feeling the heat for having him host last November. Since the election, those critics have unleashed a full fledged inferno on SNL for “normalizing” Trump with a new think-piece seemingly published every day, and last week’s episode lacking an appearance from Baldwin’s Trump only fanning the flames.

Possibly in an attempt to regain some normalcy to SNL, they brought in an old friend, Kristen Wiig, to host their Thanksgiving episode. Wiig was her usual goofy self, giving fans what they tuned in for and providing this episode a lift during a few rough patches. It might be a letdown after last week’s episode with Dave Chappelle, but honestly anything would have been, outside of someone like Eddie Murphy hosting.

Alec Baldwin has stated publicly that he does not want to appear as Donald Trump any longer, but at least for this week, SNL coaxed him into another appearance. While this cold open may not go for the jugular like many fans have been asking, it does present Trump as someone who is naive about the situation in which he now finds himself.

Kate McKinnon is great again as a Kellyanne Conway who is now dealing with the repercussions of a Trump presidency, and Jason Sudeikis also makes a guest appearance as possibly our next Secretary of State, Mitt Romney.

Many Americans said they would move to Canada if Trump won the election, but SNL has thought of a better solution to their problems, a literal bubble to keep “that America” out. A society that finds McSweeney’s clever, pays for items using paper “favors” with Bernie Sanders on them, and drinks raw milk. Some fans might think SNL is attacking the wrong group of people, but this sketch was pretty spot-on.

Barbara DeDrew (McKinnon) and “Whiskers R We” has been one of the more consistent recurring sketches since its premiere three seasons ago. This time around, DeDrew’s partner is “Furonica” (Wiig) who helps DeDrew show off such adoptable cats as Carl, a Jill Stein supporter, and Pearl, a white cat who is actually a ghost out for revenge.

If you follow him on Instagram, you know that Pete Davidson was a pretty staunch supporter of  Hillary Clinton, and you’ve also seen his disappointment over the past 10 days. In an Update that had the most biting jokes about Trump of the night, Davidson also had some harsh comments for his hometown of Staten Island, Kanye West, and the relatives he’ll see on Thanksgiving.

Two recurring Wiig characters returned during this episode, Secret Word contestant Mindy Grayson and Sue, the easily excited relative who can’t keep a secret. If you’ve seen either of these sketches in the past, there weren’t any surprises this time around, but Sue has a slight edge because of Wiig’s crazy performance.

** Steve Martin and Will Forte appeared during Wiig’s monologue with Forte noticing that he received less applause than Martin.

** Bobby Moynihan provided some nightmare fuel as a clown balloon during the Macy’s Thanksgiving parade:

** Kenan Thompson’s Grant Choad replaced Bill Hader’s Lyle Round as the host of the “Secret Word” sketch, but Hader recorded a good-bye message for fans as Round.

**The xx performed “On Hold” and “I Dare You” off their upcoming album, I See You.