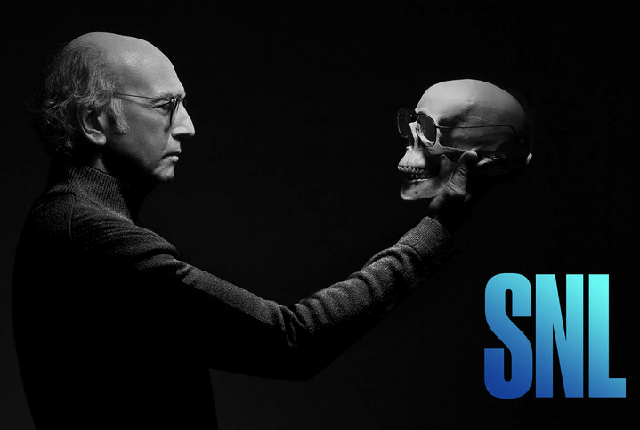 Long-time fans of Saturday Night Live know the history between the show and Larry David. Hired as a writer for the final season of Dick Ebersol’s disastrous tenure from 1981 to 1985, David famously only ever had one sketch, “The Great Elevator Stool Debate,” make it to air during his lone season at SNL before Lorne Michaels returned the next season, cleaned house, and worked to re-establish SNL as must see TV.

After SNL, David went on to greater success with Seinfeld and Curb Your Enthusiasm, so things worked out in the end. On Saturday night, David got a little bit of revenge when he returned as host for the first time. Fans expecting sketches with David’s signature social awkwardness got their fair share of that, while those hoping he would branch out a bit had to be happy with a pretty great episode. After a couple of missteps since returning from the holidays, it was good to see SNL getting back on its feet with another loose and fun episode this season.

Cold Open: A Message from Senator Ted Cruz
One of the issues facing SNL with this current batch of GOP candidates is that many of them are essentially already parodies of politicians. Each of them, in their own way, says or does something each week that makes the average person scratch their head, or sit in shock at the sheer audacity of what they’re saying. That makes it hard to poke fun at someone who is already doing a pretty good job of doing so themselves.

In the case of Texas Senator Ted Cruz, he’s smarmy, does poor impressions from The Princess Bride, and just won the Iowa Caucus. He’s the perfect target for this week’s cold open, except there are very few people who don’t already have a strong dislike for Cruz. The material for Taran Killam’s Cruz was weak, and even a jab at the weirdest video of the week, Cruz’s own daughter rejecting him at a campaign stop, falls flat.

Best Sketch: Bern Your Enthusiasm
This sketch seems like a gimme, with David’s spot-on impression of Senator Bernie Sanders in a Curb Your Enthusiasm setting. But the writing and acting are so great that this might be one of the best sketches by the end of the season. If Sanders continues to hang around the Democratic race, we should keep seeing David occasionally stop by SNL, but this would have been an amazing send-off for David as Sanders.

Sanders himself appeared in a sketch later in the evening, “Steam Ship,” playing Bernie Sanderswitski, and then helped David introduce the 1975 for their first song, “The Sound.”

Second Best Sketch: Totino’s Pizza Rolls
Last season, JK Simmons hosted the SNL episode before the Super Bowl, and it featured a Totino’s Pizza Rolls commercial parody with Vanessa Bayer as Simmons’ bored wife in the kitchen. At first, this new Totino’s parody seems like a complete copy of last season’s sketch with Bayer returning to make the pizza rolls for her “hungry guys” before things turn very, very dark.

Weekend Update Moment: Jon Rudnitsky’s Dirty Dancing Audition
Jon Rudnitsky is now 12 episodes into his SNL career and has about 12 minutes of screen time, so it was nice to see him get a chance to spread his wings a bit on Weekend Update. SNL rarely does physical comedy anymore, so it was nice to see Rudnitsky and SNL commit to this weird, but funny bit. Rudnitsky can be seen getting some love from Aidy Bryant and Taran Killam during the good-byes.

Sketch That Was Better Than the Super Bowl: Cam & Peyton
If you watched Super Bowl 50, you saw both the Carolina Panthers and Denver Broncos struggle offensively, leading to a less than stellar game and a 24-10 Denver victory. This sketch pointed out some of differences in how the team’s quarterbacks Cam Newton and Peyton Manning have been portrayed by the media leading up to the game through a parody of “Ebony and Ivory.”

Other Notes:
Sasheer Zamata was the only cast member shut out this week, but you can barely make her out at the back of the cast during the good-byes.

Ben Stiller and Owen Wilson appeared as Derek Zoolander and Hansel on Weekend Update to promote their new movie, Zoolander No. 2.

Two sketch comedy shows were announced this week featuring former and current SNL cast members and writers. Netflix will start streaming The Characters on March 11. This eight-episode series will feature eight different comedians who have each been given a half hour to “do with whatever they want.” Former SNL cast member and current writer Tim Robinson will be in charge of one of these episodes. A day later, FOX will premiere Party Over Here, a half-hour show that will air on Saturdays from 11 to 11:30pm, and is executive produced by The Lonely Island (Andy Samberg, Akiva Schaffer, and Jorma Taccone).

You can read all of our SNL recaps here.