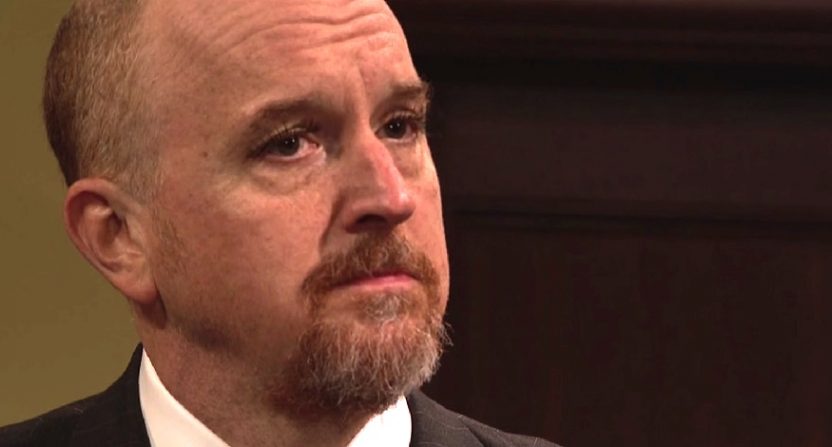 After almost a month break, SNL returns for the final leg of its historic 42nd season with a familiar face, Louis C.K. The comedian has appeared as host in four of the past five seasons, and was appearing this time to promote his new Netflix stand-up special, 2017, but C.K.’s comedic status hasn’t always equaled laughs during his previous hosting appearances.

This episode was no different, making you start to wonder why they keep asking him back to host. C.K.’s sketches always seem a bit off, either due to his limits as a live sketch performer or his ability to get the writers to create something incredibly awkward for him.

Together, these factors make for uneasy television viewing, which may have hit its apex during a soda shop sketch that may have left some viewers feeling enraged if they believe the sexual assault rumors that have hounded the comedian for years.

Rumors or not, this episode was another lackluster hosting appearance by C.K. that was saved by Alec Baldwin, and the slacktivist lifestyles of many Americans.

Cold Open: Donald Trump at the Mine

Another standard Baldwin as Trump cold open with the sketch hitting all the same “Trump is clueless” notes as previous appearances. Some viewers in Kentucky may take offense to being portrayed as staunch Trump supporters even as their needs aren’t being listened to. But Trump won there by 30 points in November, the biggest margin by any presidential candidate in the state’s history.

Baldwin appeared later in the episode as embattled Fox host Bill O’Reilly. That sketch also featured an interview between O’Reilly and Trump that was executed very well by Baldwin.

We’re all a little bit like Scott (C.K.), sharing or retweeting those articles about Syrian refugees or the Flint water crisis. We’re reaching tens of people with this important message. We done good.

Of course, you do need to follow that up with real action, and some of us do that. But the majority of us wallow in that slacktivist afterglow from our couch until the next crisis hits our news feeds in need of action.

In a night filled with bad attempts at quirky, one sketch did break through as stupidly funny. There was no weird pronunciations of “sectional couches,” à la marble columns, just a man (C.K.) telling the stories about his love of sectional couches, a woman’s (Aidy Bryant) need for the biggest sectional couch, and the ultimate departure of his family because of his sectional couch adoration.

Pepsi released an ad this week featuring Kendall Jenner and a whole bunch of happy protesters making friends with police officers by handing over some Pepsis. The ad was tone-deaf and ultimately pulled by the soda company just days after its release.

In the aftermath, many were left to wonder if anyone actually thought about whether the ad was a good idea before moving ahead with its production. Beck Bennett appears as the ad’s director who — after telling his sister, father, and their black neighbor the ad’s concept over the phone — slowly realizes his “singular vision” is a terrible idea.

How To Get Kate McKinnon to Break Sketch: Tenement Museum

During her four and a half seasons on SNL, Kate McKinnon has made a regular habit out of making hosts and fellow cast members “break” during sketches.

This week, it was McKinnon’s turn to break due to C.K.’s awful, Borat-ish Polish accent. The sketch, featuring McKinnon and C.K. as racist Polish immigrants, isn’t particularly funny, but seeing McKinnon break had to make Ryan Gosling feel pretty good.

** During a short and uneventful Weekend Update, McKinnon returned to the Update desk as Cecilia Gimenez, the “artist” responsible for the touchups done to the fresco, Ecce Homo, in 2012. Gimenez reviewed the bust of soccer star Cristiano Ronaldo that was unveiled during a ceremony last week in his native Portugal that has received similar internet fame.

** Writer Julio Torres made his late-night stand-up debut on Late Night with Seth Meyers this week. Torres has written several memorable sketches in his first season at SNL, including “Through Donald’s Eyes,” “Wells for Boys” and one of my personal favorites, “Diego Calls His Mom.”

** Variety reported on Friday that NBC would air an ad for Verizon written by Colin Jost and starring Kenan Thompson during an upcoming episode. The ad is a collaborative effort between Verizon and SNL, and appears to be scheduled to air during next week’s episode. SNL has also signed a similar deal with Apple to produce an ad for a later date this season.

** Speaking of Apple, it was announced this week that SNL has created an iMessage app that contains almost 100 character stickers including Hanz and Franz, Harry Caray, and The Ambiguously Gay Duo.

** The Chainsmokers performed “Paris” with the song’s co-writer, Emily Warren, and “Break Up Every Night.”

** Saturday Night Live returns on April 15 with host Jimmy Fallon and musical guest Harry Styles. This will be the first episode in the show’s history to air live in every contiguous U.S. timezone.