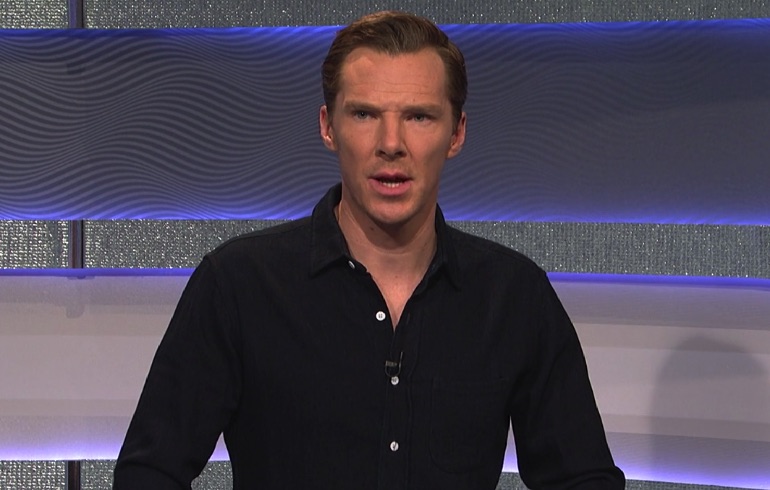 It was one year ago that Donald Trump hosted Saturday Night Live. At the time, his candidacy was still seen by many as a long shot within the wide-open Republican field and his rhetoric viewed as racist, uninformed, and possibly a little bit crazy. SNL choosing Trump to host was seen by some as a shrewd move to increase ratings, or a poor choice for giving Trump some credibility.

A year later, we enter the last weekend of the presidential election and Trump is the Republican candidate possibly just days away from becoming the next president. As Trump inched closer and closer to the nomination, SNL (along with the national media) felt a backlash, and the show has spent all of this season distancing itself from the GOP nominee.

Benedict Cumberbatch finds himself hosting SNL for the first time while starring in the latest Marvel blockbuster, Doctor Strange, and as the country sits anxiously awaiting the end of this historic election. While not known for his comedic chops, Cumberbatch actually performed well throughout the night. Unfortunately, this episode fell flat after a strong start and Cumberbatch found himself hosting the worst episode of this short season.

Roughly 72 hours before the end of this election, Kate McKinnon and Alec Baldwin appeared once again as Hillary Clinton and Trump. After trading barbs, and mocking the continued focus on Clinton’s e-mails while Trump’s list of missteps continues to grow, Baldwin breaks character and apologizes to McKinnon. The two leave Rockefeller Center in an attempt at unification before returning to the stage at Studio 8H to urge everyone to vote.

With the apology and breaking of characters, it would appear that SNL could be ready to move on from having Baldwin and McKinnon face off even if Trump loses, and makes good on his promise to dispute the election results. Baldwin’s Trump has been a huge hit, so we’re bound to see him occasionally throughout the rest of this season, but probably not on a weekly basis once the election hangover goes away over the next couple of weeks.

It is a question that has divided us for years, one Beck Bennett thankfully had to guts to ask: “Why Is Benedict Cumberbatch Hot?” Vanessa Bayer and Aidy Bryant attempt to answer this question while Cumberbatch himself tries to downplay his own attractiveness.

In this parody of Apple’s 1984 Macintosh commercial, Kohler introduces a new toilet that allows you to sit “the cool way” on a toilet, backwards so you can rest your arms on the back. This parody was also reminiscent of the Q45 Infiniti toilet commercial starring Mike Myers from 1993.

If you break a 108-year-old drought and your biggest fan is a former cast member, you deserve an appearance on SNL. The Cubs were represented by Dexter Fowler, Anthony Rizzo and David Ross, with Bill Murray rounding out their barbershop quartet. Back-up singers helped them sing the team victory anthem, “Go Cubs Go,” a song that the rest of America will be sick of very soon.

In an episode light on highlights, this sketch about Mr. Shaw, an eagle statue headed mannequin(?) who hangs out with celebrities and donates money, was one of the biggest lowlights. Most 10-to-1 sketches are odd, but this one made almost no sense, and was so bad I felt the need to mention it here.

** Fowler, Rizzo, and Ross also appeared as strippers in the “Bachelorette Party” sketch. The hero of this sketch was Aidy Bryant, who somehow kept her cool as multiple crotches and asses were thrust into her face.

** Pete Davidson returned as the dim-witted pool boy, Chad, from last seaon’s Julia Louis-Dreyfus episode. This time around, he is having a meeting with a college professor (Cumberbatch).

** Solange performed “Cranes in the Sky “ and “Don’t Touch My Hair.“

Great having you on Update, Church Lady! #SNL @danacarvey pic.twitter.com/Spsy7Rpvgx

** Dana Carvey made an appearance during Weekend Update as The Church Lady.

**Bobby Moynihan did not appear in this episode. Leslie Jones and Sasheer Zamata only appeared during the monologue.