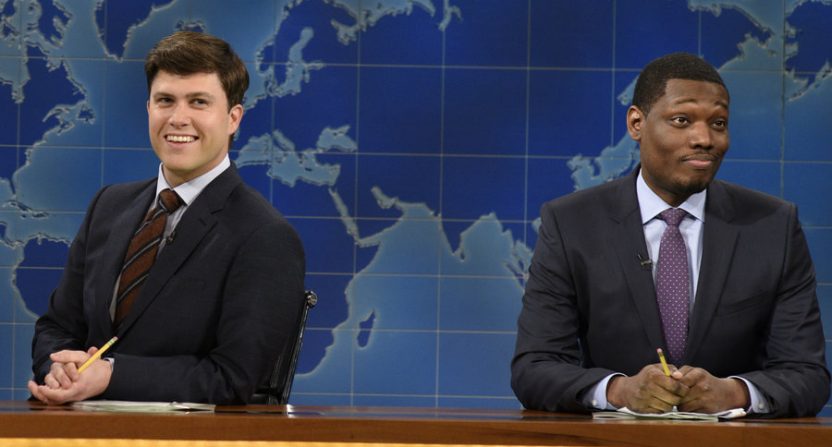 After a month of speculation, NBC and Saturday Night Live announced on Tuesday that “Weekend Update” would be coming to primetime later this year. Current “Update” anchors Colin Jost and Michael Che will bring Weekend Update Thursday to your television for four weeks starting on Aug. 10.

NBC is clearly striking while the fire is hot. SNL’s ratings have been the show’s highest in years, thanks to the decision to launch an all-out offensive strike on Donald Trump and his administration that includes having stars like Alec Baldwin, John Goodman, and Melissa McCarthy appearing on a semi-regular basis. For the first time since Tina Fey was appearing as Sarah Palin in 2008, SNL is must-see TV, generating buzz about what will happen and who may appear every week the show airs .

SNL has aired a weekday “Weekend Update” in the past with various success. During the Palin/Fey ratings bonanza in 2008, SNL aired three weekday “Updates” in October ahead of that year’s presidential election. Anchored by Amy Poehler and Seth Meyers, those episodes had over eight million viewers each week. That, in turn, led NBC to bring back the show a year later with a possible nine weekday “Updates” planned over the course of season 35.

Unfortunately, the first three episodes had roughly half the viewers, and NBC scrapped the idea of airing the additional six episodes. The last attempt at a weekday “Update” was when Seth Meyers anchored two episodes September 2012 with similar results.

Unlike the previous two elections, possibly worried about ratings close to those in 2009 and 2012, SNL decided not to produce any weekday “Updates” in the final months of the 2016 presidential election. Jost and Che did anchor special edition “Updates” during the Republican and Democratic national conventions over the summer on MSNBC.

Jost and Che, who are in their third season together as “Update” anchors, seemed to gel last season leading into this all-important election campaign, but Season 42 has not been the breakthrough for “Weekend Update” that some anticipated. The segment has been wildly inconsistent from week to week, only buoyed at times by the appearances of Kate McKinnon, Leslie Jones, or Pete Davidson. This inconsistency could be due to the limited focus “Update” has for its segment each week.

While the rest of SNL gets to work with characters like Trump and Kellyanne Conway, who are portrayed by great comedic actors like Baldwin and McKinnon, “Update” needs to rely on jokes delivered by Jost and Che that you may have seen a variation of during the week on late-night talk shows, or from the millions of armchair comedians on Twitter.

SNL has been dealing with this problem for a few years. But it has made the political humor on “Update” this season tepid at best, and the switch to non-political jokes in the second half of the segment has become slightly awkward.

Some of this awkwardness is the fault of Jost and Che. Last season, it seemed as if Jost and Che had found their niche as “Update” anchors. They were going to be loose, occasionally feature extended jokes, and play on each other’s obvious differences, but the looseness appears to be gone from “Update” this season.

In a piece for Vulture this week, Jesse David Fox wrote that a “fog has settled in” at SNL, and many working on the show are exhausted by the still-constant need for political sketches this far past the election. Even on “Update,” which is typically the one constant avenue for political humor on SNL, it’s possible that such a fog has crept in, making for the dull and rigid “Updates” produced since the start of 2017.

Weekend Update Thursday is an obvious attempt at a ratings grab by NBC, CEO Richard Greenblatt said in the show’s press release: “SNL is having its best season in a quarter century, so we didn’t want them to take the summer off.” While attacking Trump has helped SNL and numerous other shows in the ratings, “Update” is not the reason for this ratings surge at SNL.

Casual fans are the reason behind the ratings increase at SNL because they want to see the bombastic guest stars when dropping in. But it’s possible that a longer “Update” could give the writers an opportunity to expand on their thoughts in a manner not allowed in the segment’s roughly 10-minute form, leading to some funny and unusual bits that would be great for longtime SNL fans.

Weekend Update Thursday will need both the diehard and casual viewers if it wants to succeed where it matters most in primetime, the ratings.