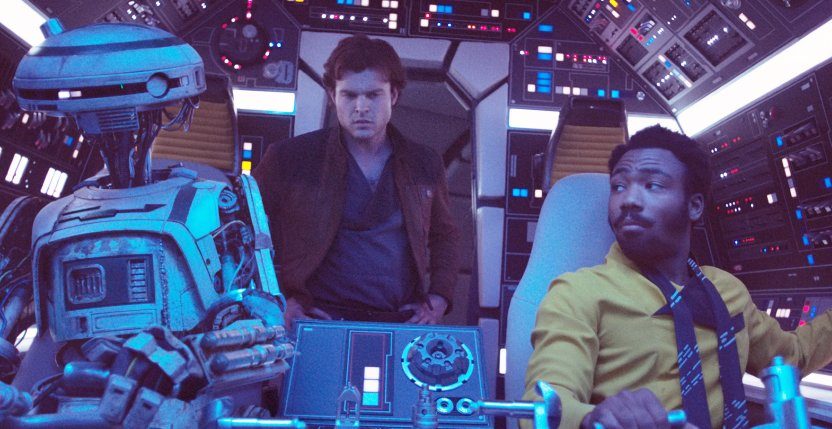 ***SPOILERS for Solo: A Star Wars Story BELOW***

Early on in Solo: A Star Wars Story, our titular hero (Alden Ehrenreich) is attempting to leave his home planet of Corellia by joining the Galactic Empire and becoming a pilot. When asked for his name, he replies “Han” but doesn’t have an answer when asked to provide a surname because he has no kin or family. After mulling it over for a second, the Imperial officer gives him the last name “Solo.”

It was at this moment that I wondered to myself, “wait, was I wondering how Han Solo got his name?” Because I was pretty sure I wasn’t. Despite the fact that I am a lifelong Star Wars fan old enough to have seen Return of the Jedi in theaters, I don’t think it ever seemed like a question that needed asking.

Solo seems to think that Star Wars fans are in desperate need of this kind of information and goes to great lengths to give us answers to questions we didn’t even know anyone was asking. Such as why Han refers to Chewbacca as “Chewie.” Or why the navigational systems of the Millennium Falcon are so unique. Or how Han eventually ended up working for Jabba the Hutt. It’s not just that the answers to those questions were always “just because”, but also that no further answer ever seemed necessary.

Sure, now I know what the Kessel Run looked like and why making it in less than 12 parsecs is noteworthy (which finally makes sense), but having seen it happen doesn’t do anything to deepen my understanding of Han Solo or the Falcon. I already knew he was a daring pilot and it was an amazing ship. Actually seeing it happen may have been a fun scene, but it doesn’t inform or upgrade my understanding of anything from the original Star Wars films now.

It’s not quite “introducing midichlorians to explain how The Force works,” but it’s on the same planet.

This strange practice sums up the futility of making a movie about how young Han Solo became Harrison Ford’s iconic Han Solo. Oddly enough, it reminds me of a scene from a different Harrison Ford movie, The Fugitive. Ford’s character tries explaining to Tommy Lee Jones’ FBI agent that he didn’t do the things he’s been accused of and the FBI agent simply responds by saying, “I don’t care.” At times, it feels a bit like we’re all Tommy Lee Jones watching Solo.

With all of that out of the way, Solo isn’t a terrible film by any stretch. The latest Star Wars standalone film (that is clearly set up to be the first in a series of its own) is a fun heist story when it wants to be. You could make the case that, had you stripped Han Solo’s origin out of the film and just made it about a totally new band of characters, much like with Rogue One, you could have boiled the story down to its true essence as a compact caper that just so happens to take place in the Star Wars universe. Or perhaps you could have gone the other way and really tried to figure out a thematic throughline for young Han to become the rogue we know, rather than the jumbled version we get.

In fact, when you really step back and look at the story of Solo, it feels like a missed opportunity to really dig into the themes and story arc it wanted to tell by existing as a TV show and not a movie. Recounting the plot, this becomes all the more apparent.

Young Han and Qi’ra (Emilia Clarke) are orphans on the shipbuilding world of Corellia who hatch a plan to escape together. Things go south, and while Han gets away by joining the Empire, Qi’ra is left behind. As a lowly Empire soldier, Han comes across a gang of criminals led by Tobias Beckett (Woody Harrelson) posing an Imperials. Spooked by being found out, they get Han thrown in a pit to be killed by a beat that turns out to be Chewbacca (Joonas Suotamo). Han and Chewie escape and join the gang on a mission to steal fuel from a mountainside train.

That plan goes awry, leaving Beckett and Han to answer to Dryden Vos (Paul Bettany), a crime boss in the Crimson Dawn syndicate. Han cooks up a plan to make up for the lost money by traveling to Kessel to steal unrefined fuel and bring it back. Han also discovers that Qi’ra is now working for Vos and Crimson Dawn and she accompanies them on the mission. The crew needs a new ship and they enlist the help of Lando Calrissian (Donald Glover), a charismatic smuggler who, along with his “woke” droid L3-37 (Phoebe Waller-Bridge), runs the Millenium Falcon.

Mind you, we’re not even halfway through the second act, which then gives way to an entirely new mission and confrontation that includes some double-crosses which lead to another confrontation. In the film’s final scene we see one last thing happen that had been mentioned in the original Star Wars films, as if to say, “but remember, this is why you’re here.”

Throughout all of this, you’re supposed to be watching Han Solo thematically and literally inch closer to becoming the character we know and love. The actual result is fairly muddled mostly because the many plot points and missions bump up against one another in a way that creates confusion over what the audience is supposed to see happening inside Solo’s head.

It would be one thing if Han were an idealistic rube like Luke Skywalker was as a kid, but he’s not. He’s already a hustler unafraid to get his hands dirty by the time we meet him. In the climactic scene of the film, Han eventually reveals that he was one step ahead because he learned how to read untrustworthy people, but it also feels like that kind of thinking was inherent to his character all along. And if his takeaways from the events of the film are what lead him to become Harrison Ford’s version, it feels rushed and unearned.

All of which is to say that you probably could have taken this entire story, put it in the form of eight hour-long episodes of TV, and nailed everything you were going for. In doing so, they could have let so many of these piecemeal moments breathe a bit more, allowing us to get inside Solo’s troubled mind. We could watch each interaction, each betrayal, and each doublecross really land blows to his psyche as he slowly morphs from being a cocky kid who thinks he’s got it all figured out to a wisened cynic who knows it’s better to be on your own (with Chewie, of course).

A TV version of this story also could have allowed for much more depth to each piece of the puzzle. The orphan gang of his youth. His soul-crushing experience as an Imperial soldier. His first smuggling mission. Making a deal with Vos and reconnecting with Qi’ra. Convincing Lando to help them. An entire episode dedicated to the Kessel Run. And so on. There’s a lot of story in Solo and a lot of opportunities to really flesh out the themes and character developments that were lost in the film.

As-is, there are still plenty of great moments and scenes in Solo. The train robbery is enjoyable and the Kessel Run itself is exciting. Everything Donald Glover, Phoebe Waller-Bridge, and Paul Bettany do is fantastic and they all steal the show in their own ways. Ehrenreich ends up doing an admirable job, finding a way to balance Ford’s iconic portrayal with his own. The film might not justify its existence, but if you’re willing to separate it from everything else that comes connected, it’s an amicable moviegoing experience. If you didn’t enjoy The Last Jedi, I’m guessing you’ll probably enjoy Solo as a return to form (though if you dislike both then there’s simply no hope for you).

Given the tepid (by Star Wars standards) box office and controversial behind-the-scenes process, we’ll have to wait and see if Solo 2: Duo is ever made. Certainly, a surprising cameo near the end of the film hints at a much larger story to be told. It’s unlikely that they’d consider shifting that story to the small screen, which is a shame given the space that would open up. It would also allow them to really dig into this character in a way there simply doesn’t seem to be time or interest in doing on the silver screen. But, hey, at least now we know why his last name is Solo. So that’s something, I guess.