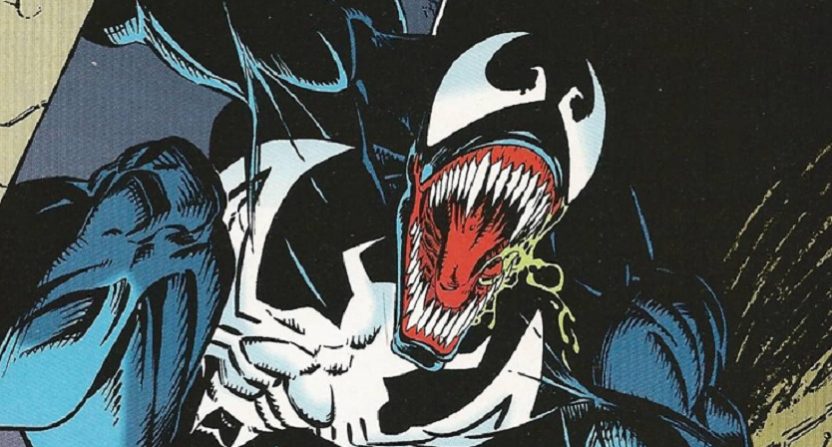 If you were a fan of Spider-Man comic books or the Saturday morning cartoon in the 1990s, there’s a pretty good chance you’re familiar with the character of Venom. A tar-like alien symbiote latched onto Spider-Man as he returned to Earth following the Secret Wars miniseries, giving Spidey his cool black costume, but slowly began to take over Peter Parker’s body and personality with evil intentions.

Venom sort of embodies the 1990s in Marvel Comics, with a bigger, bolder, meaner antihero who spawned a variety of miniseries, regular titles and toys to become something of an industry on his own. (Cable, a character that will be in Deadpool 2 and is currently one of Hollywood’s hottest casting rumors, is another example of this, though Venom was arguably even more popular.)

You may also recall Venom as one of the villains in 2007’s Spider-Man 3, with his human host, Eddie Brock, played by Topher Grace. The character was Spider-Man’s most formidable adversary during the 1990s and an extremely popular character, so popular that Spider-Man 3 producer Avi Arad essentially strong-armed director Sam Raimi into including him into the story. (That decision is easy to deride now, but it did take Spider-Man’s modern fandom into consideration, while Raimi’s tastes leaned toward the classic Spidey villains. It may have been a sensible choice, but perhaps with a different director and film.)

The cinematic version of Spider-Man has been rebooted twice now — the latest in the upcoming Spider-Man: Homecoming, in which Marvel Studios has taken the production reigns and integrated the character into the Marvel Cinematic Universe — and with each revival, Sony has aimed at making Venom a strong spinoff property that can sustain its own film franchise. Yet the problem is that Sony needed to get Spider-Man right before it could spinoff another franchise. (An attempt to create a super-villain team-up, Sinister Six, also sputtered after The Amazing Spider-Man 2 was viewed as a failure.)

But with Spider-Man about to get a creative reset and presumably find its footing in the MCU, Sony is ready to try and make a thing out of related characters that could be its own films. Last week, Sony announced that it was developing a film around Silver Sable and Black Cat, two adversaries/allies to Spider-Man that makes for a rather obscure property. I’m not even sure Spider-Man fans are excited about that one, unless they’re big fans of those characters.

More importantly, however, Sony wants to get started on that Venom franchise. Seemingly out of nowhere, the studio announced a release date for a movie that virtually no one covering the film industry was aware of being developed. According to The Hollywood Reporter, Sony has a script in hand, but no director. (Alex Kurtzman, director of this summer’s The Mummy, had previously been attached and perhaps could be again.) Under those circumstances, is Sony really ready to have a Venom movie ready by Oct. 5, 2018?

The answer appears to be yes, especially if the studio follows through on plans to make a Venom movie that’s less of a superhero-related blockbuster and more of a creepy horror film. Collider reports that Sony views Venom as a R-rated property, something that’s become more feasible over the past year with the success of Deadpool and Logan. Both films took those superhero stories in more adult directions — Deadpool with bawdy humor and graphic violence, and Logan with a very dark tone, along with arguably more graphic violence — and since we’re talking about an alien creature with jaws that can bite anyone’s head off or a physiology which can smother its victims in tar-like goo, going the horror route seems like a sensible path.

(It’s surely not a coincidence that Venom’s script is being written by Dante Harper, one of the credited writers on the upcoming Alien: Covenant.)

An idea of how a Venom film with no implicit connection to Spider-Man and a dark horror tone might look was provided in 2013, when producer Adi Shankar made a “bootleg universe” (featuring characters he didn’t own the license to and weren’t outright mentioned) short film directed by Joe Lynch, titled “Truth in Journalism.”

In the short, a French film crew follows New York reporter Eddie Brock (played by True Blood‘s Ryan Kwanten) and discovers that his investigation isn’t just for journalistic purposes. Oh, and he has a very dark secret that remains hidden until necessary. Venom is never mentioned, but the Eddie Brock character is an obvious nod as are the traits of the alien symbiote when it’s revealed. The tone is very much like a horror movie, with much of the violence and gore obscured from the camera. With a feature-film budget (though Sony reportedly isn’t interested in $100 million budgets for this) and an R rating, much more would be visible on screen.

The question is whether a Venom series of films would follow Brock throughout or if the symbiote could move to different characters in subsequent films. That would presumably make it easier to continue the story and expand the franchise. Naturally, that could be determined by whether or not the first Venom movie is successful — or if it’s even made, which isn’t a guarantee because a standalone film detached from the Spider-Man and Marvel cinematic universes seems like such a risky proposition.