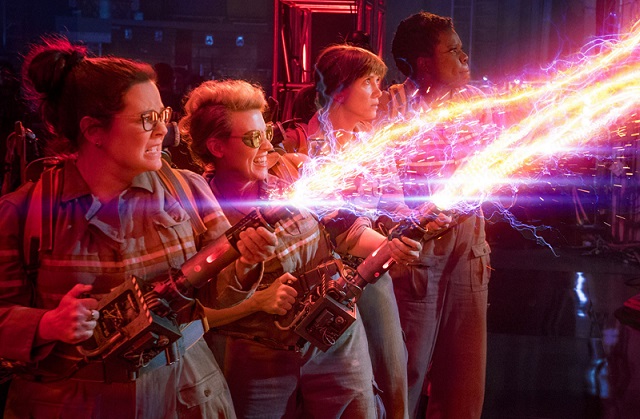 Don’t be afraid of the new Ghostbusters. It’s nowhere near as bad as the haters wanted to believe. In fact, it’s pretty good and a much-needed dose of family-friendly fun for what’s been a lackluster summer movie season thus far.

The Ghostbusters remake has fought a swirling vortex of bad buzz and fan hostility ever since the project was announced. Some detractors preferred not to see the classic 1984 comedy starring Bill Murray, Dan Aykroyd and Harold Ramis remade. The original Ghostbusters is a movie many people grew up with. For some, it was a favorite movie of their childhoods. Though a remake in no way erases the memory of the original film, the premise of a modern update does imply that a better version can be made.

It’s a bit surprising that Ghostbusters hadn’t already been remade during the past 30 years. Special effects have made major strides, thanks to digital imagery, which could result in bigger, scarier ghosts and monsters. Plenty of funny actors are available to play the heroes, though many might have been hesitant to step in the shoes of Murray, Aykroyd and Ramis. And it’s a familiar brand label that could attract an audience based on name recognition alone.

But another, more vocal segment of the fanboy audience didn’t want Ghostbusters to be remade with an all-female cast of comedic actors. That stance is more troubling, seemingly fueled by the ignorant belief that women can’t be funny and shouldn’t be the lead players in an action comedy driven by special effects.

Never mind that Melissa McCarthy has headlined several recent hit movies including The Boss, Spy and The Heat. Kristen Wiig is an established comedic talent from her years on Saturday Night Live, and has been expanding her range as an actress with smaller dramatic roles. Kate McKinnon is currently the standout player on SNL, and Leslie Jones is emerging as a popular member of the cast.

Most of the online disdain was directed at the first trailer for the movie, released back in March. The Ghostbusters trailer was the most disliked in YouTube history, receiving nearly one million dislikes. Was the preview really deserving of that kind of negative reaction? Why was there such a campaign against it, especially from people who hadn’t seen the film yet?

OK, not everyone responds to a trailer. If people didn’t think the movie looked funny, that’s a fair reaction. Maybe some even thought this remake didn’t look like a suitable successor to the 1984 film and their memories of it. Those people clearly aren’t going to see the movie. But does that mean no one should?

The good news is that the new Ghostbusters is far better than those campaigning against the film were irrationally hoping it would be. Is this version better than the 1984 original? No, it’s probably not going to change the opinion of anyone who loves the first Ghostbusters film. Hell, director Paul Feig might join you on that side of the room. His film is absolutely reverent to its inspiration. Maybe too much so.

Feig includes many, many nods to the original Ghostbusters in his film, starting with the theme song by Ray Parker Jr. Those notes are obviously intended to stir up positive memories for fans and appeal to their nostalgia. And for those who don’t remember the original theme song, it’s just a fun, catchy tune. It’s certainly better than the new theme song by Fall Out Boy.

Also included are the familiar hearse that’s been retrofitted into a ghostbustin’ mobile and, eventually, the fire station headquarters. But Feig does build toward each of those components during the course of the story, attaching them to either a character or plot development. Where the director might let his fandom show a bit too much with the frequent cameos that occur throughout the film. For some fans, those appearances of familiar faces will be fun and an affectionate nod to the past. For others, they might be distracting and take away from what’s supposed to be a new venture.

In that regard, Feig is trying to have it both ways. And there’s nothing wrong with that. He almost has to acknowledge the affection that fans have for the original Ghostbusters. Acting like it doesn’t exist might be perceived as an insult. Are all of the nods gratuitous fan service? Probably. But Feig is clearly a fan of the 1984 film too, and is having fun with being able to remake a beloved piece of his childhood.

Everyone involved with this movie is having fun, which is what makes it enjoyable to watch. Whether it’s from playing similar roles to the ones Murray, Aykroyd, Ramis and Ernie Hudson made famous more than 30 years ago, or getting to perform the sorts of action hero roles that women don’t typically get in movies, the cast is having a great time. Sometimes, that’s enough to carry a movie and work past its inherent flaws, such as with the Ocean’s Eleven films. 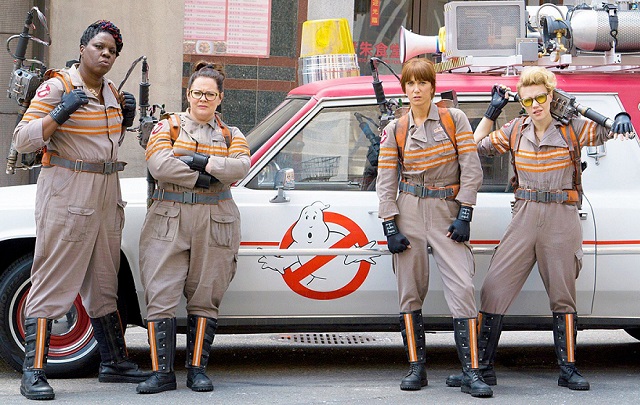 No, Ghostbusters is not a great movie. The story suffers especially from not having a great villain. There is an antagonist (Neil Casey), who’s trying to free ghosts from their paranormal prisons and bring them out into the real world where they can presumably take over existence. But he’s mostly just an oddball presence until he possesses the body of Kevin (Chris Hemsworth), the Ghostbusters’ ridiculously handsome, dim-witted, aspiring actor. Hemsworth essentially takes the villain role in the climactic third act, which is kind of a shame for Casey, who should have gotten to play megalomanical instead of just weird.

(By the way, Hemsworth was some excellent casting, Between this and his role in Vacation, maybe he has a future in comedy when he’s not swinging Thor’s hammer. Although those those good looks and otherworldly physique probably shouldn’t be wasted.)

Much like Judd Apatow, Feig is a director who likes to turn the camera on and let his actors work through the script, allowing them to improv their way to the best scene. Sometimes, that results in really funny lines and gags. Other times, it takes on the feel of actors trying a bit too hard to be funny and trying to salvage some humor. That might be especially true with McKinnon, though she’s still the standout of the film as Jillian Holtzman, the Ray Stantz/Tony Stark mad scientist piece of the quartet. She more than holds her own on screen with McCarthy and Wiig.

This cast could be even more fun to watch in a sequel. Maybe Feig could enlist the help of some directors familiar with action or stunt coordinators (like the Russo brothers did with Captain America: Civil War) to create some better action sequences when the Ghostbusters fight those ghosts. The scenes this time around aren’t bad, and the actors were certainly willing to throw down, but the action could have been more coherent and exciting.

Hopefully, everyone involved gets another try at it, now that the characters and premise have been established. (Stay through all of the credits. Feig clearly has a sequel in mind.) The backstory between McCarthy’s Abigail Yates and Wiig’s Erin Gilbert probably has plenty of material to mine for future stories, or at least secondary plotlines. What gadgets and weapons will Holtzman come up with next? With a stronger script, these actors could truly shine.