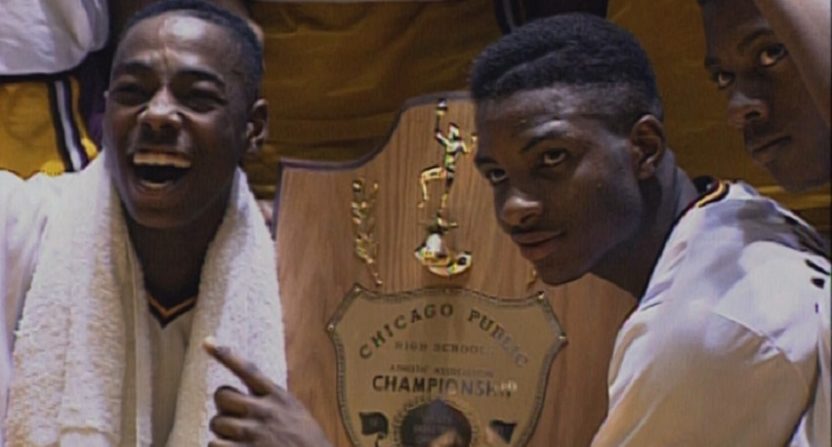 On Sunday, we sat through another four hours of self-serious tributes to the film industry and food randomly dropping from the rafters before the 89th Academy Awards ended in hilarious controversy when the wrong movie was briefly awarded Best Picture. In typical Oscar fashion, it was way too long and people complained endlessly about the host.

And yet something was missing. Was it the absence of Quentin Tarantino and his coke wizard? No, it was a glaring lack of sports. Other than O.J.: Made in America winning Best Documentary, there wasn’t a whole lot to do with sports. And even that movie is mostly a sociological portrait of a specific time, rather than a focus on Simpson’s football career. Fences includes some elements of sports, but is primarily a family drama.

What gives? Based on my calculations, of the breadth of human drama, sports comprises no less than 90 percent. Don’t ask how I reached that figure. It’s a proprietary metric. Anyway, it’s clear we need an Oscar-style examination of sports movies, replete with the type of incoherent internal politics that we’ve come to expect from the Academy.

Focusing on one year would offer too limited a picture. So instead, this is a compilation of nine sports Best Picture nominees culled from all of movie history. Instead of merely saying these are the best nine sports movies period, it’s a cross-section of different sports and film genres. As always, some with be dissatisfied, and that’s fine. It’s never a proper sports or movie discussion without rampant disagreement.

It’s amazing this movie wasn’t recognized by the Academy during its original run, though it did receive two Golden Globe nominations that year. It features several great performances, including Tom Hanks at the peak of his ‘90s run of classic roles. I’ll rectify that by getting A League of Their Own on the list. I mean, if not for this movie, an entire generation might never know the rule against crying in baseball.

Documentaries, like animated movies, are seldom allowed to vie for the grander prizes at the actual Oscars, which is too bad. The narrow focus on scripted prestige dramas shuts out lots of worthy contenders. No longer. The best basketball movie is Steve James’ landmark documentary which no less an authority than Roger Ebert termed the best movie of the ‘90s.

Foreign films also have a difficult time claiming awards outside of their designated category, which is a shame, because not only is Lagaan the rare effective musical about sport, it’s just really, really good. Though if I were to fill out a full category of international sports movies, you’d best believe I would get the zany Shaolin Soccer in there as well.

This coming-of-age story is overlooked in several ways. It’s a compelling human drama, and also includes a rare depiction of cycling in popular film. And if you’re choosing between movies of that era that focus on endurance sports, I’ll take this over the stuffy Chariots of Fire any day.

One thing the actual Academy often neglects is comedy, which is never granted the same prestige as drama. This is likely why you seldom see so few sports movies get recognition at Oscar time, as many of them are comedies deemed frivolous by the Academy. As Caddyshack doubles as one of the most celebrated sports movies of all-time, as well as one of the best-known comedy movies, it certainly merits inclusion.

Take issue with professional wrestling’s inclusion as a sport if you want, but there are few movies which do as good of a job capturing an athlete who has given his life and health over to that pursuit. It can be agonizing to watch at times, but these are often the stories of sacrifice and degradation that tend to get ignored in the mythology of sports.

It’s a raucous celebration of the brutality of hockey, but it’s also a rare look into how small regional teams bring distraction to economically distressed areas. The presentation of professional sports is more sleek and corporatized than ever, making Slap Shot more and more feel like a throwback to a more raw time.

Rocky is one of the few sports movies to ever win Best Picture, and arguably one of the most influential ever. So why put a later film in the series in favor of it? Well, not only is Creed extremely well-done, but it’s more entertaining than the original. And you need at least one controversial choice to keep things interesting. Besides, you still got Stallone in there.

While football may be the most popular sport in America, Hollywood generally has a hard time making a compelling version of it on-screen. Oliver Stone’s Any Given Sunday is a little too incoherent to be a true classic and North Dallas Forty, while still relevant today, never quite did the book justice. This uplifting movie covering the racial integration of a Virginia high school football team remains the high-water mark for football movies, as well as another memorable Denzel Washington role.

1 thought on “Ladies and gentlemen, the nominees for Sports Best Picture”