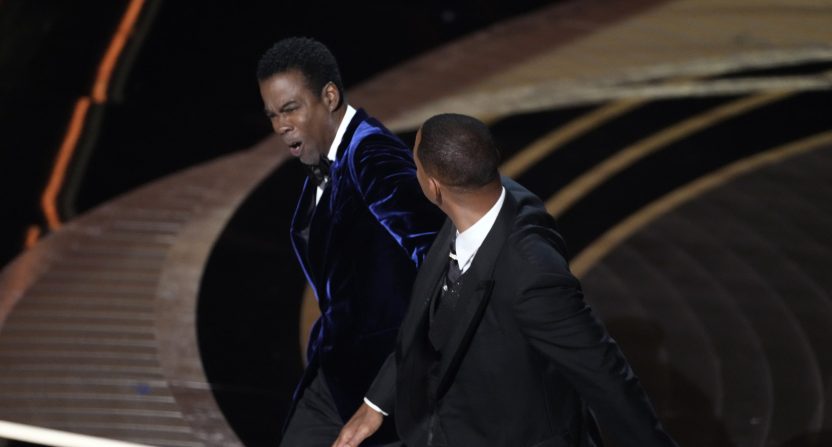 The 2022 Academy Awards will be remembered for one thing and one thing only, the time Will Smith got on stage and smacked Chris Rock in the face after the comedian told a joke about Jada Pinkett-Smith’s hair.

Social media lives for moments like this and the reactions were flying fast and furious all night long, including from Serena Williams, who was on-hand to see Smith later win Best Actor for his portrayal of her father in King Richard.

Smith gave an emotional acceptance speech that seemed to divide viewers and social media again, with some appreciating the raw emotion and others wondering if he’s going through some stuff.

Will Smith’s full speech at the #Oscars pic.twitter.com/aHOducBBsq

Given everything that has transpired, you better believe that reporters were lining up backstage to ask Smith about the incident. However, that’s when the Academy reportedly announced they were putting the kibosh on questions unrelated to any winner’s award victory.

Plenty of people rolled their eyes at this announcement, but it especially hit home for sports reporters. They’re routinely told by teams, schools, and leagues that certain types of questions are off-limits at certain press conferences or that they’re not allowed to ask about certain topics. And for many of them, that’s a line that entities such as those aren’t allowed to cross with a journalist.

So when news that the Academy was going to try to limit what kind of questions would be asked after the ceremony, sports media folks were lining up to comment on it.

The whole reason we have a free press is so people can't tell them what questions to ask. https://t.co/MWe4vpgWAY

I imagine this order went over as well as it does in sport https://t.co/6sSS0s7ksW

Good luck with that https://t.co/vSWHrDLRJo

Yeah good luck with that https://t.co/L0MLVfCD32

It’s a pretty standard thing for Hollywood PR people to try to limit bad press for their clients. But given the significance of The Slap and the fact that Smith is going to be standing there to talk about his evening, the chances no one asks about it are somewhere around 0.00%.