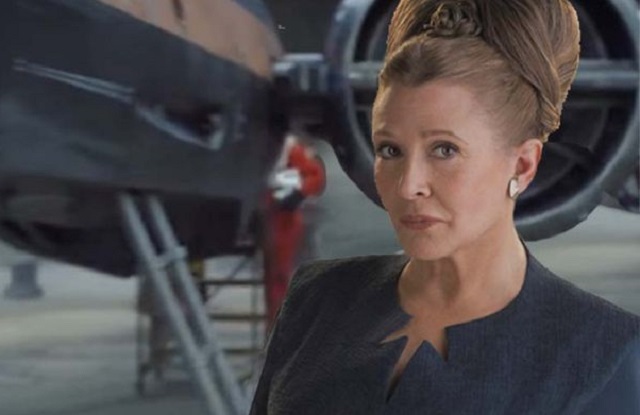 The recent passing of Carrie Fisher caught many by surprise, as many celebrity deaths do. While fans mourned the loss of a cultural icon, there are those who are now tasked with attempting to figure out the best way to handle her signature character in the revived Star Wars universe following her death.

Fisher’s character of Princess Leia (now a general) was set to have an increased role in the upcoming Episode VIII, due out this December. That made sense, as the story of Episode VII played out in a way that gave her character more to deal with in the next chapter as the crew potentially reunites with Luke Skywalker (Mark Hamill) and Leia is faced with confronting her son, Kylo Ren (Adam Driver), who [SPOILER ALERT…?] killed Han Solo (Harrison Ford) in the latest chapter of the Star Wars saga.

The Hollywood Reporter claimed those two key scenes were set to be used in Episode VIII and/or Episode IX (due out in 2019), but it was unknown when those scenes would be used. Fisher completed her filming for Episode VIII, but Episode IX has yet to begin shooting.

Though scripts can change by the day and week, it was rumored to be expected Leia’s role in the story would be key in the next two films, but now that Fisher has passed away, the storytellers responsible for the Star Wars canon must now figure out how to gracefully remove Leia from the script, because CGIing her into the film(s) afterward would likely not be received very well after the experiment seen in Rogue One: A Star Wars Story. Odds are the masters behind the magic at Disney working on such a beloved franchise will handle this as well as they possibly can.

It is not unprecedented for a movie franchise to have to address the death of an actor. The Hunger Games franchise had to deal with the death of Philip Seymour Hoffman, for example. Of course, Fisher’s Leia is a bit more well-known and a tad more highly-regarded in stature than Hoffman’s role as Plutarch Heavensbee in the film adaptation of the Hunger Games story.

As beloved a character as Leia is, the new writers working on the Star Wars films now have the benefit of being able to focus the primary story on newly developed and introduced characters and using the classic characters that have been a part of the story since it began as complimentary characters.

Episode VII was more about new, younger stars taking the leading role in the story with old, familiar faces there to provide guidance at times. Though the return of Luke should be a key addition to the plot moving forward, it would be wise to keep leaning on the newer faces in the story to carry the plot, thus reducing the need for a character like Leia to carry the weight.

Whatever happens, there should be a good amount of trust in those working on the Star Wars story arc to handle this one well. However they end up doing it will surely be a sentimental moment for long-time Star Wars fans.