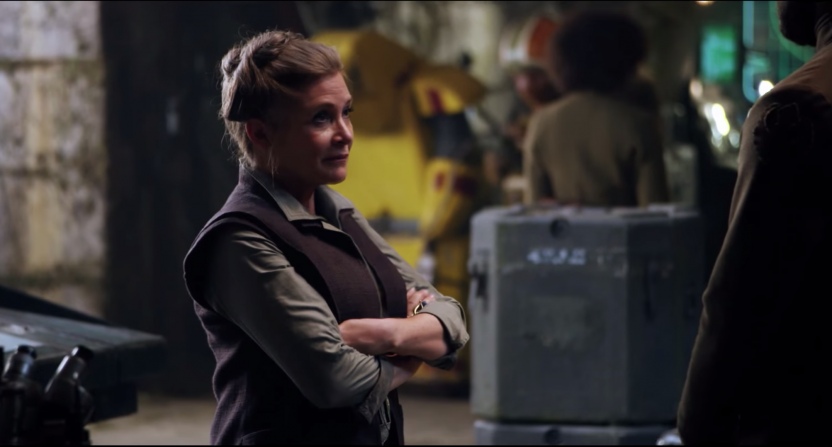 According to the brass behind the new Star Wars films, the trio of major characters from the original trilogy was each supposed to be featured in one of the new trilogy films. Han Solo got the focus in The Force Awakens, Luke Skywalker was central to The Last Jedi, and the plan was for Leia Organa to be the linchpin of Episode IX. Those plans seemed dashed when Carrie Fisher sadly passed away in 2016 before the release of Last Jedi. Producers have been adamant about not changing the story to kill off Leia or use CGI to recreate her as they did in Rogue One, leaving many to wonder exactly what the plan was considering how central she is to the story.

Now we know as Lucasfilm has officially announced the cast and crew for Episode IX, citing that footage shot for The Force Awakens will be used in the upcoming film.

The role of Leia Organa will once again be played by Carrie Fisher, using previously unreleased footage shot for Star Wars: The Force Awakens. “We desperately loved Carrie Fisher,” says Abrams. “Finding a truly satisfying conclusion to the Skywalker saga without her eluded us. We were never going to recast, or use a CG character. With the support and blessing from her daughter, Billie, we have found a way to honor Carrie’s legacy and role as Leia in Episode IX by using unseen footage we shot together in Episode VII.”

It’s the smartest play all around. You certainly can’t shove the character of Leia offscreen in this film, especially given her importance in the previous two films. And a CGI recreation would have sparked a backlash. But by using footage that already exists and reworking the film around that, they’ve found the best possible solution. Besides, chances were already that Leia would be spending much of the film in a dirty starbase watching a battle take place via holograms, as she is often doing in Star Wars movies. We’re going to guess they probably didn’t need to change as much as we think in that regard.

The rest of the cast announcement doesn’t hold too many surprises. Daisy Ridley, Adam Driver, John Boyega, Oscar Isaac, Lupita Nyong’o, Domhnall Gleeson, Kelly Marie Tran, Joonas Suotamo, Anthony Daniels, and Billie Lourd are all reprising their roles. Naomi Ackie and Richard E. Grant are also joining the cast as new characters. Of course, Billy Dee Williams will be returning as Lando Calrissian in a move that many fans have been waiting for. Perhaps the only surprise announcement, and we mean that only slightly, is that Mark Hamill will return as Luke Skywalker. Chances are, he’ll be a bit more spectral this time around.

As previously announced, Force Awakens director J.J. Abrams is also back to direct, replacing Colin Trevorrow. He also co-wrote the script along with Chris Terrio (Justice League). John Williams also returns, continuing his streak of scoring every chapter in the Star Wars saga.

Episode IX is currently scheduled for a December 2019 release.