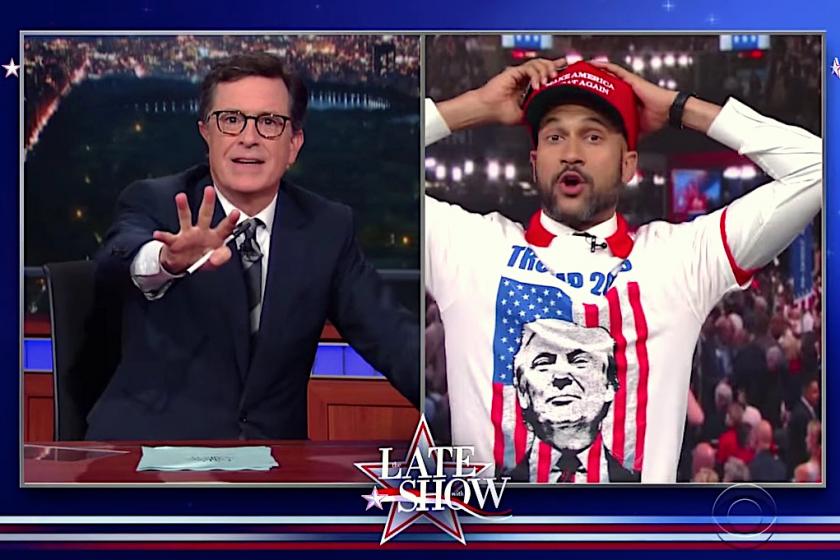 A couple of months ago, I was assigned to write a piece about Stephen Colbert’s dwindling ratings. My thesis was that Colbert’s inability to maintain David Letterman’s legacy through the lack of creativity and genuine boring nature of his Late Show was enough to give him the boot early and let Late, Late Show host James Corden have a shot at the 11:35 p.m. throne.

In the same week I was assigned this story, Corden appeared on Howard Stern’s radio show and coyly denied having discussions with CBS about the earlier late-night slot. It sounded believable, but didn’t make sense given how much his star power has risen just in the past year. The fact that the 12:35 a.m. host has to deny he could possibly grab the 11:35 p.m. slot in the near-future was bad news for Colbert.

Colbert’s late-night show would go on to poach producer Chris Licht as its new showrunner, after he saved CBS’s morning show from the doldrums of last place. Even though CBS This Morning is still third to Good Morning America and TODAY in the ratings, the show is much more competitive than it has ever been and has been much more buzzworthy than The Early Show or other morning incarnations in CBS’s morning slot. Les Moonves and the CBS gang hoped Licht could help save Colbert’s show in the same way he saved their morning franchise.

After hearing about all the sweeping changes happening to the show and falling asleep while watching The Late Show numerous times, I lost hope.

For some reason though, I just couldn’t get myself to write it down. Every time I sat down in front of my computer to write my take, I would start one sentence and then stop. Luckily, this writer’s block I had would end up serving me well — because boy, was I wrong.

Colbert’s two weeks of live shows during the Republican and Democratic national conventions were some of the best weeks of late-night television seen since Conan O’Brien was fired from The Tonight Show and forced to host a few orphan episodes before his contract expired.

One of the biggest knocks on Colbert was that he hated talking to celebrities and doing interviews with them about their work. It was the one trait of David Letterman’s that he was able to pick up. The only difference is that viewers at home could tell how much he hated doing this. He didn’t even try to make his guests feel comfortable.

In the two weeks that Colbert was live, there was a huge change in tone and behavior towards his guests. He made them a part of his shtick and had some of them play outlandish characters that fit to his political humor. Laura Benanti surprised viewers and played Melania Trump a day after she was caught plagiarizing Michelle Obama. Keegan-Michael Key played the role of a black Republican. The stars of Comedy Central’s Broad City portrayed colonial women.

Colbert’s monologue was also much punchier and up-to-date (for obvious reasons), compared to his competitors who don’t seem as engaged with politics. Intelligence is what many feared would hold Colbert back from competing with The Jimmys. But clearly, his intelligence played to his strengths during these past two weeks in order to come up with jokes so quickly that connected so well. Although we can admit that the conduct at both the RNC and DNC helped the jokes write themselves, Colbert’s delivery seemed much more authentic and personal than ever before.

But the thing that helped Mr. Colbert the most over the past two weeks is that he reminded us why we love him so much. For some reason, there is a tendency for stars in Hollywood to try new things that are totally out of the blue in order to make us forget about their past. The problem with this way of thinking is that their past is most likely the reason we grew to love them in the first place.

In the beginning of Colbert’s run, the host seemed staunch in his beliefs that his old Comedy Central character is dead and in the grave. Last August, he told television critics, “I can’t wait for (the real me) to be the only person you see.” But the reality of the situation is that as wild as his conservative cable host character is, it’s the reason Colbert is where he is today. Licht and the other powers that be at the show convinced him to bring the character back, and it did wonders for the prestige of the show. It made moments from the show into watercooler discussion that everyone was talking about the next day, and that’s the kind of attention Colbert’s show needs to distinguish himself from the plethora of other options.

Colbert even brought back his old segment known as “The Word.” He has since had to change it to “The Werd” due to legal issues with Viacom, who believe his old bits are their intellectual property. Viacom paying attention to what he is doing also means his show is finally having some sort of impact on culture.

Ratings for Colbert’s show, and even Corden’s show, don’t matter as much for CBS as long as they aren’t horrible, because those timeslots are already more profitable for the company than they ever were before.

In Letterman’s era, the late-night legend owned his own show. Now that CBS owns the 11:35 p.m. show, they have the ability to license clips or full episodes to international TV networks or digital websites. So at the end of the day, CBS is already making money on Colbert. But in today’s age, your buzz can be almost as profitable as the ratings you draw. And Colbert has a chance to pounce on this grand opportunity.

Colbert’s companion at 12:35 a.m. is living proof of this. James Corden’s “Carpool Karaoke” has brought in new sponsorships and new licensing opportunities for CBS, despite the fact that Corden’s show almost never beats Seth Meyers’ NBC show in the ratings. McDonalds and Coke now feature branding from The Late Late Show on their products and have even been featured on a “Carpool Karaoke” segment. CBS also just sold “Carpool Karaoke” as a separate show to Apple Music and has licensed The Late Late Show to other international TV stations, including Sky in the UK.

If Corden can accomplish all of this, there is no excuse for why a more experienced and well-known Colbert can’t do the same thing. These past two weeks of live shows have proven that Colbert still has an aura to him that is unmatchable and sophisticated, compared to variety/game-show host extraordinaire Jimmy Fallon and prankster Jimmy Kimmel. His smart humor during the conventions makes him unique and set him apart from the rest of the late-night pack.

But Colbert has to keep this energy flowing. If it takes adding more live shows to the schedule after big events such as the presidential debates, or adding one night of live shows a week just for the heck of it, then go for it. Colbert has proven he has the talent to host a late-night show, but he also has to continue being innovative and transformative in order to keep his slot after this crazy election is over.

I am a Kenyan-American broadcast journalist.
An avid tweeter (follow me @JMKTV).
I hope to make a difference in the world.
I was the commencement speaker at my college graduation, Scott Van Pelt was the other speaker (https://www.youtube.com/watch?v=vFUk5PPFkT0)
I won an award for outstanding achievement in sports from the Emmy organization.
My dream is to be the black Ryan Seacrest.