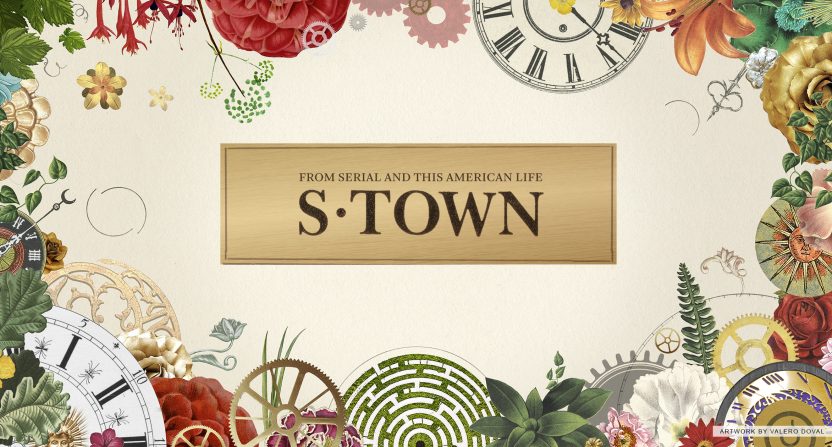 The opening monologue in the first episode of S-Town (technically, it’s called Shit Town but you can’t promote a podcast called Shit Town live on NPR) involves host Brian Reed telling an anecdote about how one goes about fixing a broken antique clock.

As he tells it, “there can be hundred of tiny, individual pieces, each of which interacts with the others precisely.”

He goes on to explain that doesn’t include years of damage and wear and tear which isn’t necessarily clear to the naked eye and that it requires someone to really get inside and try to understand how it works based on what’s there, what’s not there, and what might have been there but no longer is.

It’s an apt way to start the seven-episode podcast from Serial and This American Life, all of which dropped on the same day to the delight of binge-listeners everywhere. Those names comes with a certain pedigree that tells you something about what to expect.

Sure enough, the initial kicker to this story involves persistent emails from a man in a small Alabama town who thinks a murder has been covered up, which sounds a helluva lot like something that would a prime topic for Serial. And yet, S-Town ends up going someplace different, breaking away from the popular crime drama genre that has dominated podcast charts.

To say much more would be a disservice to any new listener, almost to the point where it feels like any discussion, no matter how broad, cuts into the enjoyment of one’s initial listen.

(I would also ask you to resist the urge to Google anything about the people and places involved in the show until you’ve listened to the whole thing, lest you ruin the journey for yourself.)

It is hopefully not too much to say that S-Town is not about what it sounds like it’s about and yet it also is. Every episode seems to begin with a specific notion that tells the listener, “This is what the show is about.” But by the time that episode is over, that entire notion has changed. And yet, there is one constant at the center of it all no matter where the story goes: John McLemore.

When we’re first introduced to McLemore, he’s like a character right out of a million TV shows or movies. A Southern motor-mouthed eccentric who will chew your ear off about anything and everything. McLemore, the man who emailed This American Life with his murder theory and set this entire saga in motion, has an opinion about everything but is especially fixated on climate change and the small town he lives in, Woodstock, which he refers to only as Shit Town.

An irresistible force of nature, it’s no surprise that he’s able to convince a public radio reporter to come to Alabama and follow up on what could potentially be a game-changing reporting opportunity. Once there, however, Reed (and the audience) realize that the initial sell, from McLemore and from the producers of the podcast, isn’t quite what it seems.

There are at least a dozen subplots and angles that pop up, go away, and pop up again throughout S-Town, but what we’re left with in the end is the story of a group of people who we would otherwise never know anything about. Regular people from a regular town in a spot on the map most of us would never consider venturing to.

The shame of that, which is all too clear by the time the podcast is over, is that we’d have missed out of learning about their humanity. The good and the bad. Because we’re introduced to people you would not consider fascinating at first glance who are indeed fascinating. People whom we might think are villains. Others we might see as heroes. Ultimately, though, they’re just people. Simple, complicated people. And like any good story, S-Town rests its laurels on those people and how we find our own nature buried within them.

Composer @danielmwenda, who wrote our theme, has released an entire album of music for #STown. https://t.co/qHdqdzBxhd

There’s a good chance that some listeners will get to the end of S-Town and think to themselves, “That’s it?” But that’s only if they’re focused on the hook. S-Town doesn’t really care so much about its own hook. Reed follows the story where it takes him and boy, does it take him to some unexpected places. And yet, it also doesn’t take him very far at all from where he starts, if that makes sense.

Like the tiny town it takes place in, everything this show wants to talk about can be traced back to an aging house tucked away on a huge piece of land in Bibb County with a hedge maze on it.

The aforementioned clock metaphor fits with S-Town because McLemore is, amongst other things, a horologist. While we know that as someone who fixes clocks or timepieces, horology is actually defined as “the study of time.” That’s an apt description of what happens in this podcast as well, its story taken over the course of multiple years as events shape the lives of people and those people shape the events that follow.

The only way to have learned what was really going on in Woodstock, Alabama was to really understand the people who live there. To look under the surface and find the cracks and holes hidden inside. Then, try to figure out what made them and how that might have affected everything since.

That doesn’t seem to fit with the stated synopsis and yet it works better than anyone, including the show’s host, could have predicted. The story of S-Town is all the deeper and richer for that.