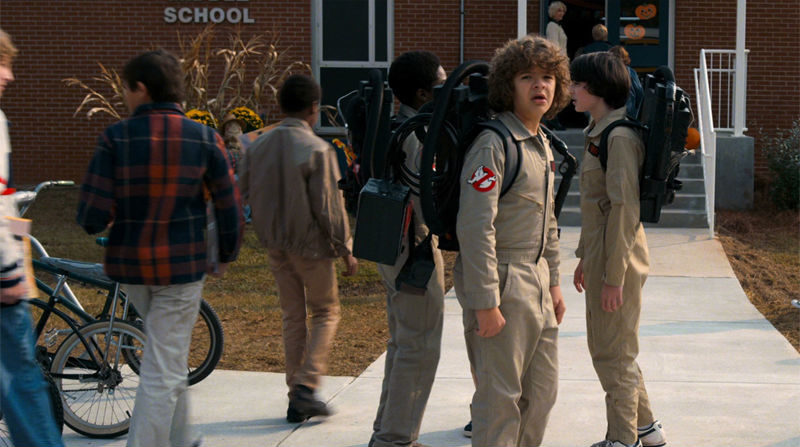 When season one of Stranger Things premiered on Netflix last year, it was an unheralded TV show that quickly became a you’ve-got-to-watch-this viral sensation. This time around, the hype couldn’t be bigger for The Duffer Brothers as they try to top their nostalgic hit’s opener with what they consider to be the sequel.

The promos and trailers for the second season have teased plenty of 80s references for the 1984-set storyline. The main trailer used Michael Jackson’s Thriller to set the tone. The kids play Dragon’s Lair, a quintessential 80s video game, at the local arcade. There’s literally a guy from The Goonies in it (Sean Astin). Perhaps the most striking and obvious reference of them all, however, was a shot of the kids dressed up as The Ghostbusters, which would have come out in theaters that year. Mike (Finn Wolfhard), Will (Noah Schnapp), Dustin (Gaten Matarazzo), and Lucas (Caleb McLaughlin) all don the costumes from the film and, presumably, have a heated conversation to figure out which one of the Ghostbusters each one represents.

We got to talk to Ivan Reitman on the phone because he and Dan Aykroyd had to approve it…[Reitman] said it was flattering, he read the scripts. He had seen the first season or at least had heard of it or pretended like he had. But they were really into being part of the show. Then they sent us all these Ghostbusters toys at the end of the shoot. That’s one of my top 5 most worn-out VHS tapes.

Not only do they end up donning the Ghostbuster outfits but the Stranger Things kids also seem to ensnare something in one of the Ghostbuster trap toys as well. Clearly, they got some carte blanche treatment from Reitman and Aykroyd.

It’s not uncommon to hear that permission is needed to use copyrighted and trademarked properties in TV and film. In fact, series producer Shawn Levy spoke earlier this year about just how difficult it was to get “Thriller” into the trailer.

“I basically decided to be a massive pain in the ass. I went back into bullheaded producer mode, and I figured out a way to work out a deal to license “Thriller.” That was a really happy day, the day that we finally pulled off that licensing arrangement.”

The work that goes into a show like Stranger Things in order to make it feel as authentic as possible is much deeper and tougher than audiences will ever know. In the end, however, the hope is that all that hard work will pay off when people are praising the new season, which drops on Netflix on October 27.