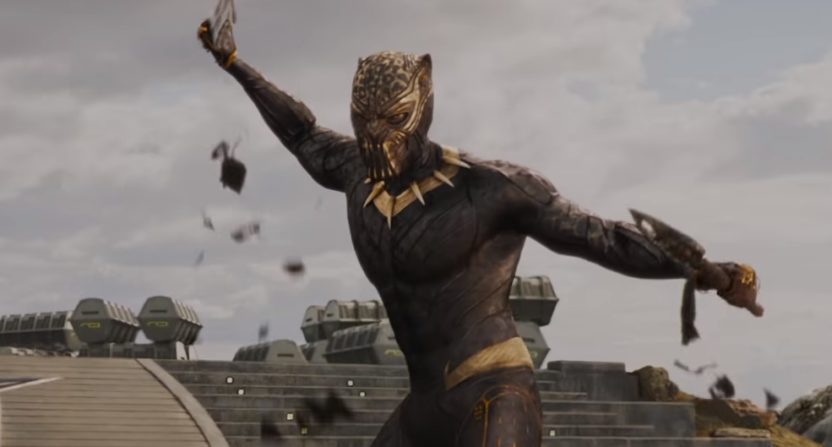 Marvel Studios dropped a surprise on fans Monday morning with a new trailer for Black Panther. Good timing with star Chadwick Boseman currently starring as a younger Thurgood Marshall in Marshall, which just opened in theaters. OK, that probably wasn’t Marvel’s thinking — at all.

It’s a bit curious that this trailer didn’t debut closer to Thor: Ragnarok‘s Nov. 3 release, but maybe Marvel wanted to create some separation between the two films. Or double up while Ragnarok is getting a whole lot of positive buzz from critics who have already seen it. The past week has also been a huge one for blockbuster trailers, following up on Justice League and Star Wars: The Last Jedi dropping their final trailers. (Maybe The New Mutants can be included in there as well, though that preview wasn’t as eye-popping as these others.)

As should be the case, this new trailer is quite different from the first preview released in June. Considered more of a teaser, that introductory trailer established the mystery of African nation Wakanda, which is far more than the third-world country most nations think it is. New king T’Challa (Boseman, with a distinct accent) was also portrayed as something of a James Bond figure, traveling the world with his bodyguards, the Dora Milaje, presumably in pursuit of bad guys such as Ulysses Klaue (Andy Serkis).

This time around, Marvel is making it clear that this is unlike any of its other movies. We get a healthy dose of sci-fi, ancient tradition and ritual, some palace intrigue, a rich cast of characters and some superhero action that makes Black Panther look like a cross between Batman and Spider-Man.

“I have never seen anything like this,” says Everett Ross (Martin Freeman) to T’Challa. “How much more are you hiding?” Those lines could easily apply to this film, directed to the audience. What more are we going to see when Black Panther hits theaters next February?

Perhaps the most exciting takeaway from this new Black Panther trailer is that Michael B. Jordan’s Erik Killmonger could be one of the best villains we’ve seen in a Marvel movie. One frequent criticism of the Marvel films has been its subpar villains, with the exception being Loki (Tom Hiddleston) in the Thor movies and the first Avengers film. But that’s been on the turnaround with Michael Keaton’s Vulture being a strong part of Spider-Man: Homecoming and Cate Blanchett looks very promising as Hela, goddess of death, in Thor: Ragnarok.

You had to have guessed that director Ryan Coogler would give his frequent star (Fruitvale Station, Creed) a juicy role. In the first trailer, we saw Killmonger whip out some blades while facing the Dora Milaje. What we didn’t see is what comes immediately thereafter, which is revealed this time around. Killmonger doesn’t just have some swords to wield against those spears. He has his own Black Panther suit, which presumably makes him a suitable challenger to T’Challa and the Wakandan throne. And is that suit gold? What does Killmonger have that T’Challa doesn’t (besides those ritualistic scars on his upper body)?

Also, we love Killmonger sporting glasses while touring a museum with Klaue. I got a Toni Toni Toni vibe, but Vulture’s Kyle Buchanan nailed it.

Can't wait for BLACK PANTHER because Michael B Jordan is playing the most terrifying Marvel villain yet: Your college boyfriend pic.twitter.com/eQDTFRgiBF

Women are important to Black Panther 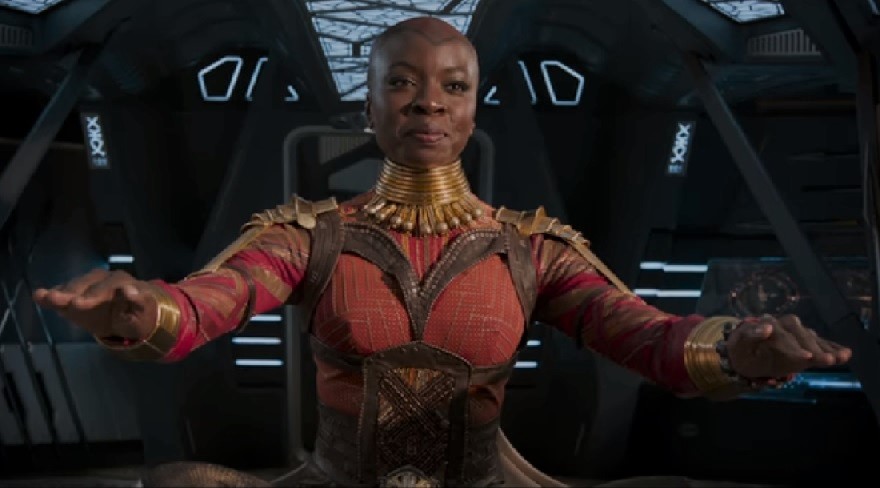 Another notable aspect of this movie (which is faithful to the Black Panther comic books) is the importance of women in the character’s story.

With his father gone (assassinated in Captain America: Civil War), T’Challa’s mother, Ramonda (Angela Bassett) is a key mentor. His half-sister Shuri (Letitia Wright) brings some childhood enthusiasm, maybe as a reminder of how cool it is to be king and play with all of the Black Panther’s gadgets that she’s designed. And as mentioned, his security detail is made up of women. The Dora Milaje don’t just quietly and blindly protect T’Challa either. Bodyguards Okoye (Danai Gurira) and Nakia (Lupita Nyong’o) both counsel him to stay sharp and to remember his purpose.

Other than Black Widow, women have largely been sidekicks and romantic interests in the Marvel films. That might be changing in Black Panther. Hopefully, Okoye and Nakia get some kick-ass fight scenes. They certainly get some cool cars and weapons to use. 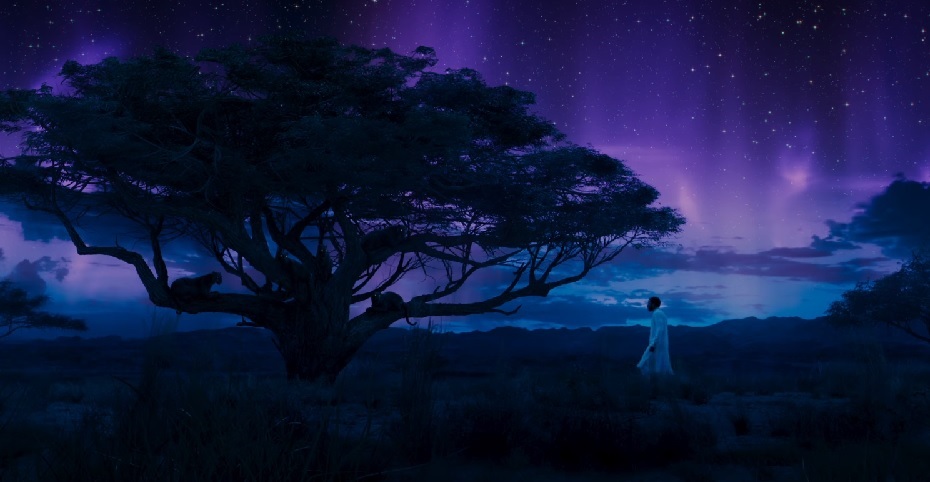 Marvel’s movies have had some memorable setting and visually impressive settings, such as the Rainbow Bridge in Thor, Knowhere in Guardians of the Galaxy and the dark dimension in Doctor Strange. But Wakanda looks like it could be the most special setting yet in the Marvel Cinematic Universe.

We see T’Challa’s personal shuttle (known in the comic books as a Talon Fighter) joined by other exotic aircraft flying alongside waterfalls, lush tropical forests and mountain ranges. (One of those mountainsides has a giant panther monument sticking out of it. There’s no doubt where the king’s palace is.) Oh, and the capital city is hidden behind a hologram! Maybe it’s a force field too. That city is thriving and crowded, looking like an exotic version of the cityscapes in Blade Runner. (And was that train flying through the air without a rail? That train, or one much like it, also appears to be a key to a climactic battle between T’Challa and Killmonger.)

And what about that shot of T’Challa approaching a tree set against a sunset? That is going to look beautiful on the big screen. Notice the black panthers resting on the limbs. Maybe this is a dream sequence, maybe part of the ritual when T’Challa consumes the heart-shaped herb that gives the Black Panther his abilities? Or it’s another moment meant to demonstrate just how different and beautiful a place Wakanda is.

Black Panther will be released in theaters on Feb. 16. Here’s the film’s new poster that was released along with the trailer. 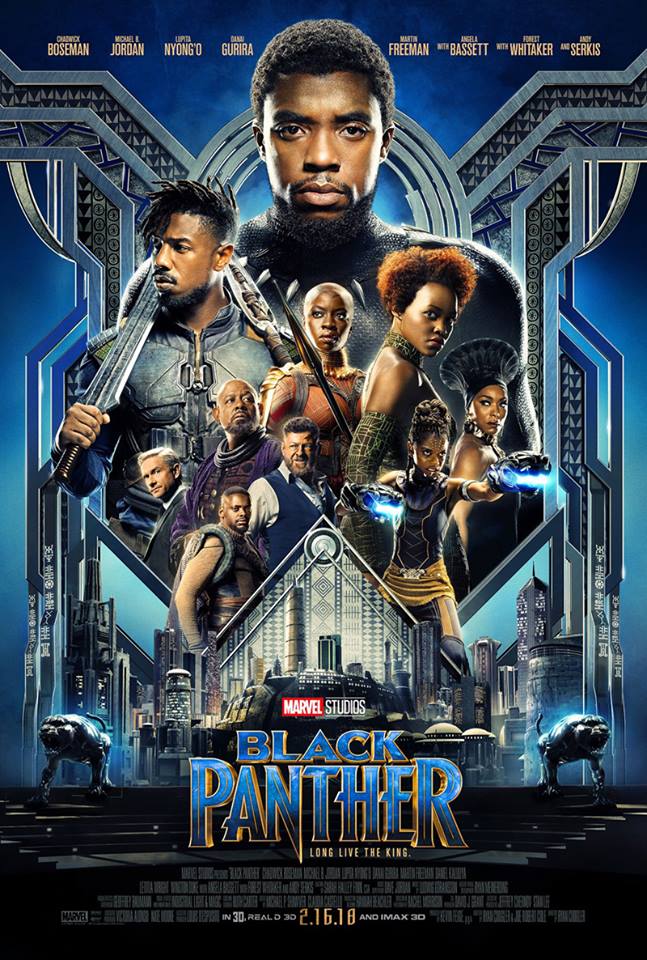