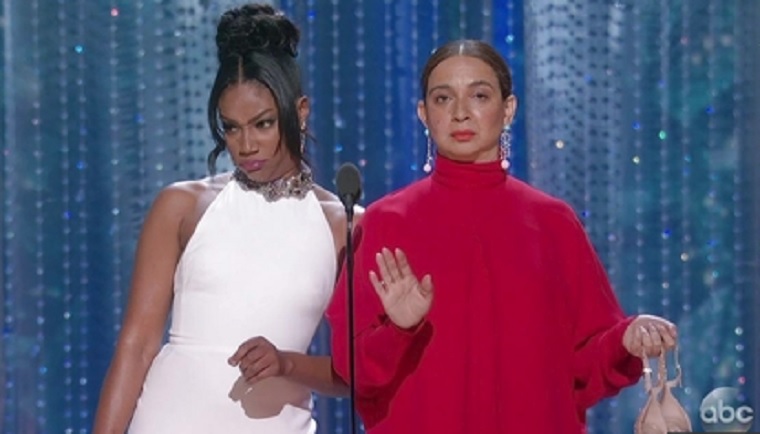 The 90th annual Academy Awards didn’t generate nearly the watercooler discussion that last year’s show did. Nobody messed up an announcement. All was well. Maybe too well. There were really any surprises, and it was kind of boring show. Even a bit that could’ve gone delightfully off the rails, when host Jimmy Kimmel took a group of celebrities to a movie theater across the street to meet fans, went pretty smoothly.

Had Get Out won Best Picture in an upset, we might be talking more about the Oscars the day after. The horror movie by the black director that most people saw, yet didn’t really seem like “an Academy Award picture” would’ve unquestionably made some headlines. But the Academy got it right in honoring The Shape of Water and director Guillermo Del Toro for a film that really incorporated everything wonderful about movies.

However, maybe we should be talking more about the fact that a sci-fi, fantasy-type movie about a humanoid fish who gets together with a mute, lonely woman in the weirdest love story you may ever see won Best Picture. I can still see the look on my mother’s face when I told her about The Shape of Water and how it was a movie she could go see. Of course, she couldn’t get past the title, let alone human-amphibian relations.

Sunday’s ceremony was a relatively boring show, but the Oscars probably needed that after generating too much excitement last year for all the wrong reasons. Here are some takeaways that stood out from the nearly four-hour (let’s get MLB commissioner Rob Manfred on this) proceedings:

It’s probably better to mix things up for the Oscars, even if it means a year or two when a host flops. But maybe Jimmy Kimmel should just host this thing every year? That is, if he wants to. He might be the Billy Crystal Oscar host of the 21st Century, the only person we can really trust with the job. And he’s already “in-house” at ABC.

Kimmel had to navigate a minefield in his opening monologue, acknowledging the #MeToo and #TimesUp social movements that have unsettled Hollywood and exposed some very raw truths about the entertainment industry. He also had to make fun of last year’s envelope fiasco without overdoing the joke. Kimmel was successful on both fronts. He said exactly what needed to be said about how women have been mistreated and Hollywood needs to do better. And he still made last year’s bungle funny.

Along the way, he also took shots at Mel Gibson, Donald Trump and Fox News, and took a swipe at the vice president while planting a flag for Hollywood: “We don’t make films like Call Me By Your Name for money. We make them to upset Mike Pence.”

Hosting the Oscars is tough. Ask David Letterman. Or James Franco and Anne Hathaway. Doing it well is probably underappreciated. Many loved the idea of Tiffany Haddish and Maya Rudolph hosting next year after they were so entertaining as presenters, and that would be a whole lot of fun. But Kimmel should be very much appreciated.

Dear Basketball should not have won Best Animated Short

Sports fans and media were amused by Kobe Bryant winning an Oscar, as were many of the athletes who played with or against him. But many Oscar observers and movie fans thought that Dear Basketball, the animated short based on Bryant’s poem written for The Players’ Tribune, wasn’t very good and the Academy was too dazzled with the idea of giving an Oscar to a NBA star.

This is the first major injustice of the night. Dear Basketball is laughably awful. What star fuckery.

Dear Basketball is bad. This was a bad choice. Bad Academy. Bad.

"Dear Basketball" was the worst of the five nominees and it wasn’t even close. #oscars

I mean this with sincerity: ‘Dear Basketball’ is not good.

"Dear Basketball" is a six-minute love letter from Kobe Bryant to himself. It's very bad! Glen Keane put a nice spin on it, but I think this is an embarrassing win.

If you haven’t seen Dear Basketball and want to judge for yourself, you can do so at the go90 website.

E!’s decision to keep Ryan Seacrest on the red carpet added some tension to the pre-show that we don’t normally see. Would celebrities avoid Seacrest due to sexual misconduct allegations from his former stylist? There were rumors that E! would put its red carpet show on a 30-second delay in case anyone said something confrontational to Seacrest, though the network denied those reports.

Then there was this comment by Taraji P. Henson, which many viewed as a slow-burning stab at Seacrest.

Ryan Seacrest get in your bodybag pic.twitter.com/7HoxLe7uV7

“You know what, the universe has a way of taking care of the good people,” said Henson. Was she hinting that karmic justice would strike down Seacrest?

After the show, Henson told People that her remarks were misinterpreted and she was actually voicing support for Seacrest. Giving him a little pinch on the chin, which many construed as a kiss of death, was actually an indication that Seacrest should keep his chin up. Still, even when Cookie’s giving some love, she’s at least a little fearsome.

Many fans thought Laurie Metcalf should have won Best Actress for her role in Lady Bird (especially since that movie didn’t win any Oscars), but Frances McDormand was hardly the wrong choice. And with no disrespect intended for Metcalf, how many actors could have played Mildred Hayes as convincingly as McDormand? That role was made for her.

The choice seemed even better when McDormand took the stage to accept her award. She acknowledged everyone on stage and then shared her moment with every female nominee in this year’s Oscar class. Some have pointed out that it was sobering to see how few people stood up, that it shows how far Hollywood still has to go in acknowledging women. But it was still arguably the best moment of this year’s ceremony.

We learned what an inclusion rider is

McDormand didn’t quite drop the mic with the last two words of her speech. Most probably expected her to say “Time’s Up” or something like that. But “inclusion rider” didn’t exactly inspire people to stand up and cheer, especially if they didn’t know exactly what that term meant.

It’s OK if you went to Google to look it up, because you certainly weren’t the only one. The best explanation was from comedian Whitney Cummings:

an inclusion rider is something actors put into their contracts to ensure gender and racial equality in hiring on movie sets. We should support this for a billion reasons, but if you can't find a reason to, here's one: it will make movies better.

If you want more of an explanation, check out the TED Talk from Stacy Smith, the founder and director of USC’s Annenberg Inclusion Initiative.

Maya Rudolph had the best line, though

“Are the Oscars too black now?” Tiffany Haddish asked. (#OscarsTooBlack?)

“Don’t worry. There are so many more white people to come,” responded Maya Rudolph. That led to a funny rant about how black people are treated by white people with clipboards and headsets.

It really is fun to watch somebody have their moment when it’s truly deserved and not the result of a publicity push or studio directive. Everybody loves Tiffany Haddish, and she was hilarious presenting for Best Documentary Short Subject with Maya Rudolph.

Twitter also had a lot of fun with Haddish again wearing the $4,000 Alexander McQueen dress that she wore to the Girls Trip premiere and Saturday Night Live.

Tiffany Haddish is wearing the same white Alexander McQueen dress she wore on the red carpet for Girls Trip, and hosting SNL, a dress that cost more than her mortgage, and the one she vowed to wear again and again. "I don't give a dang about no taboo!" #Oscars pic.twitter.com/AErmQgkZFt

And this is why Tiffany Haddish is me. If I pay 4K for a dress, I’m wearing it at my wedding, three awards shows and you gotta bury me in it. https://t.co/mpqXqhYTNN

Maybe the moment that most were rooting for was Get Out winning an award Sunday night. While the movie didn’t get the big prize of Best Picture, nor did Jordan Peele win Best Director, Peele did win for Best Original Screenplay. In doing so, he became the first African American to win the award.

Considering how much he put into writing that script and that’s where the process of making this movie began, the award was certainly meaningful. Get Out was acknowledged and Peele had his moment on stage.

Peele has obviously come a long way since ending his comedy sketch show with Keegan-Michael Key nearly three years ago. (Has it already been that long?) If you were wondering where Key was during Peele’s moment of glory, he wasn’t too far away.

Great moment here when Jordan Peele wins for Get Out ! pic.twitter.com/cRTkdTNczZ

I don’t think Jimmy Kimmel gets enough credit for continuing to find ways to poke fun at Matt Damon. He’s been doing this for nearly 15 years now, and keeps coming up with funny jokes to take the actor down a peg. This is probably a recurring gag that should’ve gone stale long ago, yet Kimmel keeps the feud alive.

Topping last year, when Damon was a presenter and Kimmel had him played off the stage, was going to be tough. And Kimmel really didn’t top that this year. But he still got in a good shot, apologizing to U.S. military for Damon being part of a war movie montage. This will never get old.

Bringing back Warren Beatty and Faye Dunaway was a terrible idea

It’s understandable how this was funny on paper. Bring back Warren Beatty and Faye Dunaway to make up for last year’s debacle in which they announced the wrong Best Picture winner. Yes, Beatty was given the wrong envelope, but those two weren’t exactly blameless in the situation. Beatty kind of left Dunaway out to dry, and Dunaway probably should’ve thought before she acted.

Maybe they deserved redemption because so many thought they fucked the announcement up. Or maybe no one else deserved to be in that position, following up what happened last year. But was there really anything to gain here?

Ultimately, it was fine. Beatty and Dunaway were fine. The announcement was fine, and Guillermo Del Toro and The Shape of Water received their well-deserved honor. OK, the mistake had to be acknowledged. But let’s move on from this next year?