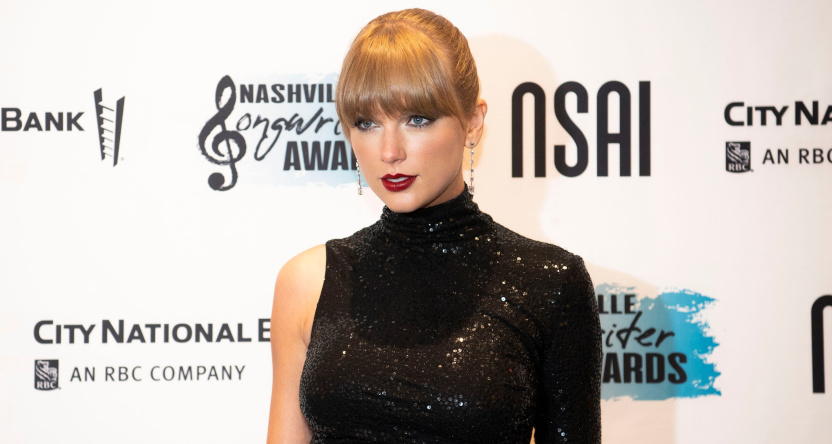 The NFL announced at midnight Friday morning that Apple Music would be the newest sponsor of the Super Bowl halftime show.

Speculation from fans and observers alike theorized that meant that country music superstar Taylor Swift would be the halftime performer at Super Bowl LVII in Arizona. The connections to Apple Music are obvious. Swift is also a sponsor of Coca-Cola, and many fans believed that Pepsi‘s exit from the sponsorship cleared the way for Swift to perform in what’s considered the largest annual platform for a musician in the world.

Entertainment and fashion magazine Variety reported that Swift (seen above at the NSAI Awards in Nashville this week) would perform. “And finally,” reporter Jem Aswad wrote, “three sources close to the situation tell Variety it’s happening.”

TMZ, however, was quick to counter in its unorthodox syntax. “Social media was on fire Friday after TS fans thought the NFL dropped a few Easter eggs that hinted at Taylor being the big performer,” TMZ reported. “However, we’ve spoken to sources with direct knowledge who tell us Taylor’s NOT going to be performing at Super Bowl LVII in Arizona.”

It remains to be seen which report is correct. But that didn’t stop the NFL world from reacting to even the possibility of a performance from the 11-time Grammy winner performing on the big stage:

Taylor Swift wrote an open letter in 2015 titled, "To Apple, Love Taylor," that was critical of artist compensation on Apple Music. The two sides eventually made up and Swift starred in an Apple Music ad.

If @taylorswift13 does the #SuperBowl halftime show, I’m gunna need to work in news again 😂 #TaylorSwift

Taylor Swift and Dan Campbell getting to meet at the Super Bowl is gonna be like one of those unlikely animal friendship videos 🥹 https://t.co/iB8OdDhqti

I do not think the country, as a whole, is prepared for the mere idea of a Taylor Swift Super Bowl performance

The NFL has yet to announce anything official regarding the performance.