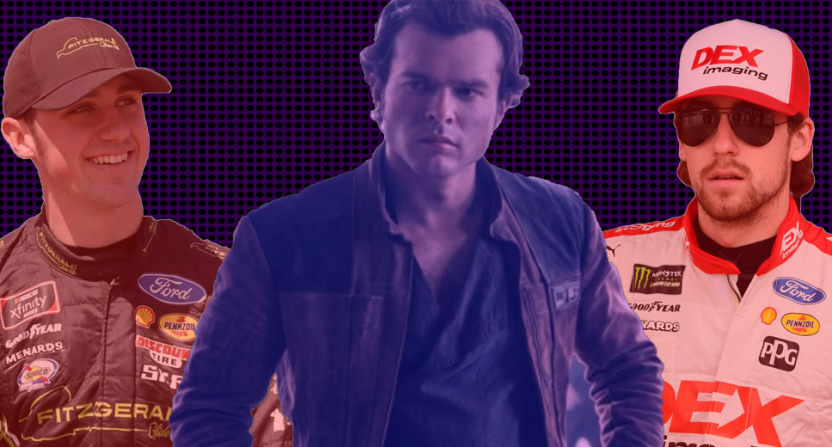 When Solo hit the big screen, the film seemed to divide opinion. With a lack of details about what the movie was about and a change in director, people were apprehensive. Was Solo going to hold up among the other Star Wars films? Will people buy Alden Ehrenreich as Han Solo after everyone will no doubt compare him to Harrison Ford? Will we learn anything that could be applied to the overall story or will it simply be a true stand-alone movie?

While at Pocono Raceway, I talked to Team Penske drivers and Star Wars fans Ryan Blaney and Austin Cindric about their thoughts on Solo. At the time of our interview, Blaney hadn’t had a chance to see it while Cindric was set on seeing it multiple times in the theater.

Despite not seeing Solo yet, Ryan was looking forward to checking it out and we talked about his anticipation and whether the mixed reviews did anything to sour his hopes.

Phillip Bupp: Since you haven’t seen Solo, what are you most anticipating?

Ryan Blaney: I don’t really know, I haven’t put much thought into it. I just want to see where they go with the whole thing and how they portray a couple characters when they’re a little bit younger. So it’s something I’ve wanted for a long time and I try to stay away from hearing anything about it, stuff like that. So hopefully in the next week or two I can make it out and go see it but I’m just curious to where they go with some characters’ backstories.

PB: Has the mixed reviews deterred you any from going to see Solo?

RB: Not really. I haven’t read anything about the movie I just heard that there were mixed reviews about it. That doesn’t really, there’s some mixed reviews about some of the greatest movies I feel like I’ve ever seen have terrible reviews so I never really listen to Rotten Tomatoes or what people say. If you like it, it’s a personal thing, you shouldn’t like a movie or not like a movie based on what someone else says.

PB: In terms of future stand alone movies, I heard rumors of an Obi-Wan movie. Is there any character you would like to see a stand alone on?

For Austin Cindric, he told me at Dover that he was planning on watching Solo on opening day and probably view it multiple times in the theater. We went in depth about the film and where Austin thinks things are going.

(WARNING: There will be spoilers throughout the rest of the article)

Phillip Bupp: What were your overall thoughts?

Austin Cindric: It was definitely a movie for the hardcore Star Wars fan. I think if you didn’t watch Rebels I think you’d be “out to lunch” especially with the ending. But I loved it. I thought it was a great little snippet. I feel like a few characters got a little bit wasted. I felt Thandie Newton’s character [Val] was wasted. Like she’s way too good of an actress to die early.

I really loved the whole deal about the Cloud Riders and Crimson Dawn. I think they really set themselves up with the amount of popularity to go into a few different directions and kind of have a bit of a look in…reason why I love Rogue One so much because it gave you that raw feeling of rebellion and being part of something bigger and I think Solo kinda keyed into that again for me with the Cloud Riders and that being the beginning of it all. I really like how it turned out. I’m going to go see it again with my brother if we get out of [Pocono] without any rain. He graduates from college this upcoming weekend so I’m going to go hang out with him before I go out to Michigan.

AC: I like the job that Alden Ehrenreich did as Han Solo but I think Emilia Clarke/Qi’ra did an awesome job. I really like that character. She is always super charismatic with her roles and I liked how there was that backstory. I wasn’t sure at the beginning of the movie just because they kinda jumped in some weird, strange situation. But at the same token, in the movie wasn’t it like they switched directors right after the beginning? So I don’t know if that was something the first director did. It seemed to get the wheels spinning after Han and Chewy met which was another awesome moment. I really loved how they did that.

AC: I have to say it’s right at the end with Han and Beckett, I thought that was a pretty neat deal. That whole final bit with the Cloud Riders, I wasn’t expecting the leader to be a young girl. I think that caught everybody off guard but it was cool for me because that’s the first time you picked up from that that this isn’t just about Han Solo. Yeah, you got the Darth Maul part but it’s all interconnected.

PB: That kinda leads into my next question. Your take on the ending? The multiple twists, Qi’ra flying away, Beckett getting killed and how Han got the Millennium Falcon?

PB: Do you think there’s going to be a sequel?

AC: I don’t know if there would be a sequel because I think that would be kinda weird if they did a sequel but I wouldn’t be surprised if you saw some of the same characters in the Kenobi movie and in the Boba Fett movie. Especially with Han and knowing his relationship with the Hutt’s, there’s obviously an untold story there.

PB: That’s what I was thinking. You might have a trilogy of stand-alone movies but they’re not going to call it Solo 2. It’s going to go and focus on someone else and connect together.

AC: The one thing I would like to see them do with these anthologies is to help bridge the gap between Return of the Jedi and The Force Awakens because there’s a lot of questions that aren’t answered there.

PB: Did you learn enough about Han through this movie that you understand more about his thought process in the trilogies?

PB: That’s why I liked Solo. I liked that progression of Han being this idealistic person and then it just chipped away at him and he became that condescending, cynical person that we’ve seen for years.