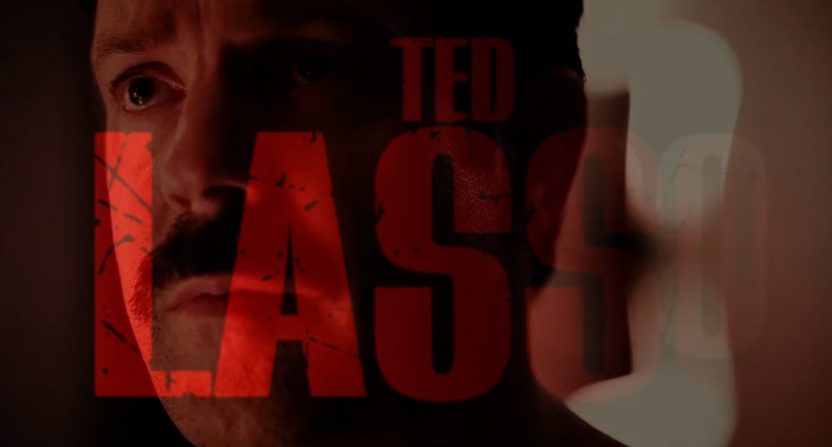 It’s been two weeks since Ted Lasso‘s Season 2 finale premiered on Apple TV+. Some viewers who waited for all 12 episodes to be released might be binging the season right now. But those who followed week-to-week might be going through a bit of withdrawal.

Elsewhere in pop culture, a new trailer for The Batman premiered last Saturday (Oct. 15) at the DC Fandome online event (kind of a Comic-Con for fans of DC Comics and their movie and TV properties). It had been a year since fans got a look at the new version of the Dark Knight, played by Robert Pattinson, directed by Matt Reeves (War for the Planet of the Apes).

YouTube creator Jason Gallagher apparently was so excited about the two developments that he mashed them together in an entertaining fan trailer. Season 2 of Ted Lasso did get a bit dark, delving into issues of mental health, bullying, and toxic masculinity.

Do those storylines fit in the gritty, very bleak world of Gotham City created for the new Batman film? See for yourself in this video. Oh, and spoilers if you haven’t yet watched Season 2.

Ted Lasso fans probably won’t disagree with Nate being portrayed as the villain here. He most definitely took a dark, evil turn in Season 2, consumed by resentment, jealousy, and entitlement, ultimately betraying the man who elevated him to assistant coach for AFC Richmond. But at least he’s not murderous like Paul Dano’s Riddler… ?

The important difference between Ted Lasso and The Batman, as shown in that mash-up, is that the soccer comedy has a lot of hugs. There are probably no such embraces when the Caped Crusader takes on the Gotham City underworld. Unless you consider Batman’s fist meeting criminals’ faces an embrace. He is vengeance. Kind of like Roy Kent.

And just in case you’re uncertain of the inspiration for the Lasso mash-up video, here is the latest trailer for The Batman. Bruce Wayne is wearing eye black and he is angry, man.

Over at Awful Announcing, a group of us recapped each episode of Season 2 weekly. You can read those here.

Don’t forget: Ted Lasso star Jason Sudeikis hosts Saturday Night Live this weekend (Oct. 23), returning to Studio 8H where he spent 10 years as a writer, then performer. Will we get a Lasso sketch?

We’d better see the return of “What Up With That?” with Sudeikis in a red track suit dancing behind Kenan Thompson’s Diondre Cole…