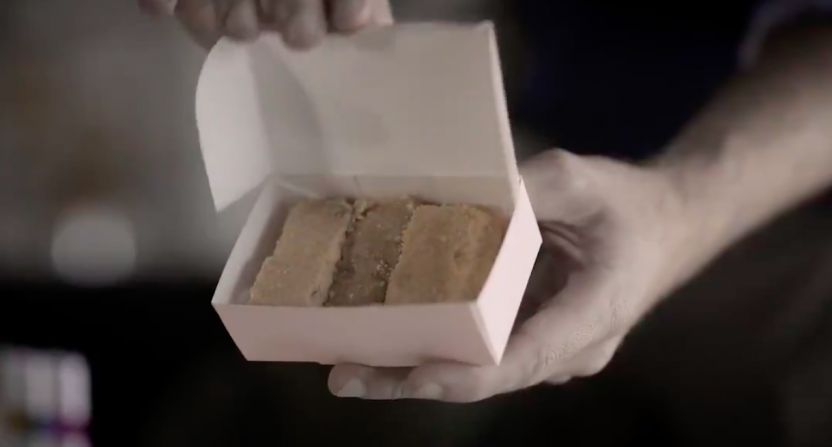 Last Tuesday, Apple made plenty of announcements during their Spring Loaded event. Perhaps no announcement thrilled TV fans and sports fans more than the reveal that season two of Ted Lasso would premiere on July 23. The TV show about an earnest college football coach who heads to England to coach a flailing soccer club was, somehow, an earnest delight that offered up plenty of laughs and heart at a time when many people needed both.

At the end of the Spring Loaded event, a graphic featuring a little box with the words “Ted Lasso’s Secret Shortbread (Makes about one box)” appeared on screen, referencing the out-of-this-world shortbread cookies that Ted gives to club owner Rebecca to win her over and which she cannot seem to be able to duplicate anywhere else. Below that image and text is a cut-off line from the recipe itself, which practically begged an eagle-eyed person to dig further.

And so, one did. Developer David Smith figured out what the text was saying (1 1/2 cups / 340 grams cold unsalted butter cut into 1/2 inch pieces plus more for greasing pan) and was able to match it to a New York Times recipe for shortbread.

The recipe in question Bittersweet Brownie Shortbread but only the first part of the recipe seems to be what Ted makes in the show. If he were to make the entire recipe it would end up being much more chocolatey and nuttier.

I love a good Internet Treasure Hunt. So when Apple teased the recipe for Ted Lasso’s Secret Shortbread, I had to see what I could find. The result was delicious.

So Smith did what anyone would do at that point…he made the recipe. Turns out, one-and-a-half cups of butter is a LOT of butter. Like, seriously, a LOT of butter, which explains why they’re so good. And in the end, Smith said the final product “tasted delicious” so it looks like Ted really does know what he’s doing.

I just now figured out why I‘ve been wanting to bake endless batches of shortbread. It’s all those darn biscuits Rebecca eats in virtually every episode of @TedLasso pic.twitter.com/Na9z7w9W5a

Of course he does, he’s Ted Lasso.