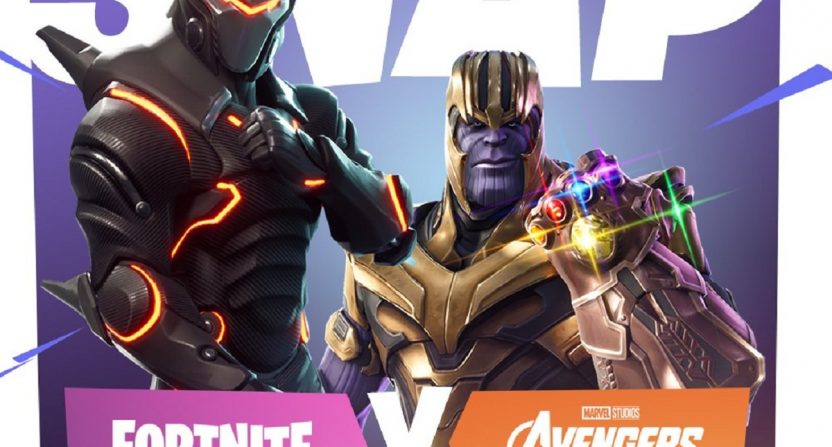 That’s via this report from Entertainment Weekly:

“Over the past few months, while we were editing Infinity War, we’d take breaks to hop on and get in a few games,” Joe exclusively told EW. “And then we started thinking, how cool would it be to have some kind of Avengers–Fortnite maashup? So we stalked Donald.”

That would be Donald Mustard, the worldwide creative director of Epic Games.

“Out of the blue, I get this call from Joe. And after a bit of geeking out over each other’s work, we start brainstorming these crazy ideas,” Mustard recalled. “It was really important that whatever we did, it had to be super authentic to both Fortnite and the Avengers: Infinity War, and something that fans of both would be excited about. About an hour later, we had the bones of this awesome idea for a limited time gameplay mode, and almost immediately our team got started.”

If you haven’t played Fortnite, you should! It’s free to download, and it’s fun, a mix of third-person shooting action and the ability to build your own structures and defensive walls on the fly via material mining. (Because I’m old, I tend to focus more on the shooting, while my brother handles the building for our duo matches. I’ve won like three times ever. But it’s fun!)

In a normal match, 100 players drop down onto the game map (which stays the same overall, except for the exact locations of materials and weapons), and an encroaching circle forces players closer and closer together as the number of people left alive shrinks. In the new crossover mode, which will launch with tomorrow morning’s update, Thanos’s Infinity Gauntlet will be on the map somewhere, as will six Infinity Stones.

Anyone who manages to get the Gauntlet along with the stones turns into Thanos, and will presumably be granted the ability to just lay waste to the rest of the game. It sounds like matches might fly by without anyone actually able to complete the gauntlet and become Thanos, though it’s tough to say yet how it will work in practice. (I personally don’t think I’m good enough to actually become Thanos in the game, but I’m excited just to be killed by Thanos, to be honest.)

More interestingly, though, is the turnaround here. Fortnite offers periodically rotating game modes (snipers-only, rocket launchers and explosives, etc.) that are delivered via semi-regular downloadable updates. Infinity War came out less than two weeks ago, and we’re already getting this mode delivered to a pre-existing and hugely popular multi-platform game. That’s a far cry from how movie video games used to work, where things would inevitably be delayed, and often fail to capture the core concept. (On every short list for “worst video game of all time” you’ll find the Atari version of E.T.)

It was never really a surprise, though; video games and films are different ways to tell stories. There’s a reason no movie based on a video game has ever been good, either. But doing something like this, with a quick and fun tie-in integrated into an existing game environment? That could be a pattern. And while Fortnite is uniquely suited for drop-ins like this, that doesn’t mean we couldn’t see more in other games. (And if this goes well we’ll probably see more in Fortnite, too. Maybe some velociraptors or a tyrannosaurus can appear on the island for Jurassic World: Fallen Kingdom.)

And really, how could this fail? The game is already free. It’s a limited-run mode, and presumably the tweaks necessary to add Thanos to the game weren’t that much different than what Epic was going to do for the next limited-run mode anyway. There’s no downside here.

Well, except for me, because it’s technically another way for me to lose in Fortnite. But it’s a new and exciting way to lose!