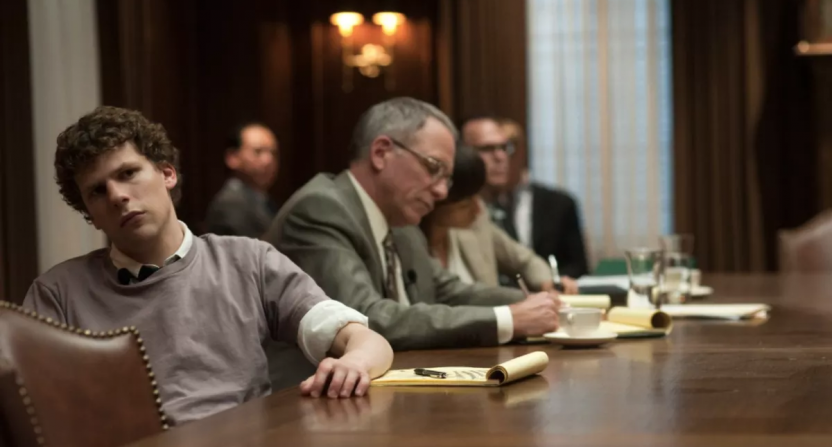 There are only a few months left in the decade, so it’s a perfect time to take a look at the ten best movies.

Quentin Tarantino has never made an uninteresting movie. His ability to write riveting dialogue while also getting the best performances out of actors is legendary. Tarantino pushes the boundaries of conventional constraints further than most (the N word is uttered 110 times in Django Unchained). This isn’t his best picture (flip a coin between Pulp Fiction and Reservoir Dogs). But Django Unchained is arguably his most interesting. It’s a spaghetti Western homage about a freed slave Django (Jamie Foxx) out to rescue his wife from plantation owner Calvin Candie (Leonardo DiCaprio).

This was originally supposed to star Will Smith who shockingly turned down Tarantino. Yet another terrible decision by Smith whose career slump has lasted a decade. (Django Unchained is Tarantino’s highest grossing film, pulling in $162,805,434 domestically). Tarantino’s attention to detail with the supporting characters from Dr. King Schultz (Christoph Waltz) to Stephen (Samuel L. Jackson) to Big Daddy (Don Johnson) is on full display here. Plus, only Tarantino could find humor in a KKK scene.

Quote: “I imagined like horseback riding with a little satchel of wine. Not some weird version of Who’s Afraid of Virginia Woolf?”

Eternal Sunshine of the Spotless Mind is a masterpiece in part because of its blending of science fiction and the harsh realities of relationships. The One I Love follows a similar playbook. It isn’t quite at that level and feels more like The Twilight Zone. Still, it’s a terrific look at how we tend to idealize our romantic partners and then get disappointed when they fail to live up to impossible standards.

Ethan (Mark Duplass) and Sophie (Elisabeth Moss) are in couples counseling in a seemingly last-ditch effort to save their marriage. Therapist (Ted Danson) suggests that they go on a retreat to a place that has worked wondered with his previous clients.  Ethan and Sophie soon discover that this retreat has supernatural powers. It makes them carefully re-examine their relationship and what each other truly wants.

Certain films are undeniably great, but you’ll only view them once because they are excruciatingly depressing. Requiem for a Dream and Leaving Las Vegas are among the title contenders for that category. Another is 12 Years A Slave. This real-life story is both educational and extremely difficult to watch because it graphically focuses on the horrors of slavery. You see it all: beatings, rape and the long, dreary struggle for African Americans to maintain their humanity amid the worst moment in American history.

This period piece is based on the 1853 memoir of Solomon Northup, who was living as a free black man in the North until he is kidnapped in Washington D.C. and sold into slavery and imprisoned in the Deep South. 12 Years A Slave is brought to life by an All-Star cast and earned Oscars for co-producers Brad Pitt and Steve McQueen (who is also the director). McQueen adroitly creates a moving drama that never shies away from what it was truly like to be a slave.

Quote: “Mud’s a born liar. That’s what makes him so likable. He makes people feel good about themselves.”

Matthew McConaughey’s career arc has been interesting. He’s been a celebrity for decades and many people thought he had potential to be an award-winning actor. McConaughey achieved the ultimate recognition from his peers with an Oscar trophy but his path wasn’t easy. He went from a rising star (Dazed and Confused) to appearing in terrible romantic comedies (The Wedding Planner, How to Lose a Guy in 10 Days, Failure to Launch, Fool’s Gold and Ghosts of Girlfriends Past).

McConaughey didn’t squander his talent, finding a career revival run known as the “McConaissance.” Mud is arguably the best film performance of his career. Yes, better than his Academy Award-winning lead role in Dallas Buyers Club. McConaughey plays a mysterious fugitive named Mud who is discovered hiding out by two teenage boys in rural Arkansas. Mud becomes a father figure, especially for one of the boys whose parents are getting a divorce. Mud is partly a coming-of-age film but it’s also a gritty thriller. It’s about the burden of regret and how it changes a person.

Quote: “There are so many things out here. And sometimes, it’s scary. But that’s okay because it’s still just you and me.”

While Room feels like non-fiction, it’s based on a novel by Emma Donoghue. Undoubtedly, it was inspired by horrific true-life events such as the women who were abducted and kept captive by Ariel Castro. Room is the fictional tale of Joy (Brie Larson) who is not only imprisoned for seven years and has a 5-year-old son Jack (Jacob Tremblay) who was born in confinement. In the hands of a less-than-skillful director, Room would have laid out a typical story about the kidnapping and ended the film with a climatic escape.

Director Lenny Abrahamson doesn’t take the easy way out. Instead, the movie starts with the plan to escape from their captor. After they successfully free themselves, the movie gets to the main point: Joy and Jack facing the challenge of re-establishing (or in Jack’s case, establishing) their lives. The post-traumatic stress is crippling for Joy and Jack has his own difficulties adjusting.

Room is sad but surprisingly moving too. It works because the characters are authentic and the performances by Larson and Tremblay are extraordinary.

Decades from now we’re still going to have to apologize and come up with some reasonable explanation as why Get Out lost for Best Picture. The Shape of Water is a nice film and is beautifully shot and includes an interspecies sex scene. However, no film from 2017 has had a more lasting impact than Get Out. It will continue to resonate because it’s the best – and perhaps first – movie about liberal racism. There are many people who don’t see themselves as racist who say and believe terrible and damaging thing about African Americans. Jordan Peele found an entertaining and engaging way to convey that message by packaging his thoughts into a horror film.

Get Out was made for $4.5 million and grossed $176 million domestically. Its success established Peele’s box-office clout as arguably the most powerful African American director in Hollywood. Get Out has become a part of pop culture with the sunken place, references to the TSA and that famous Obama one-liner. Get Out was a film America needed to see.

Quote: “I’ve been poor my whole life, like a disease passing from generation to generation. But not my boys, not anymore.”

We’ve seen bank heist movies before but not quite like this one. Brothers Toby (Chris Pine) and Tanner (Ben Foster) aren’t your typical thieves. They’re stealing for a very specific reason that doesn’t come completely into focus until the movie’s second half. Hell or High Water might be the most efficient film of this century. The script is extraordinarily tight, not one moment or piece of dialogue is wasted. Every moment has a purpose. For example, the brothers visit a casino and initially we think it’s to celebrate. No. They’re gambling to launder stolen money.

You could call Hell or High Water a buddy action film. There are two mismatched pairs. The criminals: smart but cautious Toby and hothead sibling Tanner. The Texas Rangers: soon-to-be retired and slightly racist Marcus (Jeff Bridges) and even-tempered Alberto (Gil Birmingham). The duos get on each other’s nerves, but they also respect one another.

Hell or High Water reminds us of the human cost and lingering effects of the 2008 financial crisis. Some people are still suffering.

Bravo to the Citizen Kane of sports documentaries. This almost eight-hour movie elevates the craft to heights never seen before. Director Ezra Edelman unearths new perspectives and fresh details in the most famous murder case of the late 20th century. That’s an amazing feat considering how much has been written, said and scrutinized about Orenthal James Simpson and his suspected involvement in the murders of his ex-wife Nicole Brown Simpson and her friend Ron Goldman.

O.J.: Made in America isn’t just about O.J. It’s about America and it’s uncomfortable relationship with race. We live in a nation of two worlds: White America and Black America. O.J. thought that he had crossed over.

There was so much insight you wonder what Edelman left on the cutting room floor. This film came out a year before Simpson was released in October 2017. Since then, Simpson hasn’t shied away from the spotlight. He’s on Twitter with almost a million followers and his video clips are disturbing.

Quote: “You’re not an asshole, Mark. You’re just trying so hard to be.”

David Fincher might be the greatest living director. You can argue that he’s made the best film of the 1990s (Fight Club) and the 2000s (Zodiac). When it was announced that Fincher was teaming up with Aaron Sorkin, a uniquely gifted screenwriter, you knew this was going to be cinematic gold. Only a duo this talented could turn a movie about the creation of Facebook (a story about algorithms and depositions) into a compelling story.

The opening scene is tremendous and yet simple: Mark Zuckerberg (Jesse Eisenberg) and his girlfriend (Rooney Mara) having a conversation over dinner. Sorkin turns the dialogue into an extraordinary feat of verbal gymnastics. It’s so tightly structed and takes an unexpected twist that it serves as the motivation for Zuckerberg to start Facebook. (This differs from the real story, but this creation myth helps drive the narrative.) Fincher’s visual wizardry gives The Social Network a polished and dark look. Fincher, notorious for shooting scenes over and over, is demanding. But you can’t argue with the results. This movie is about as flawless as it gets.

Quote: “You give me a time and a place. I give you a five-minute window. Anything happens in that five minutes and I’m yours. No matter what.”

Ryan Gosling plays a Hollywood stuntman with no name who moonlights as a getaway driver. He’s an Uber for the criminal underworld. He surely would merit a 5-star rating because he’s excellent at his job. That’s established in the opening scene when he skillfully and ingeniously evades the police thanks to a Clippers game. His routine is interrupted when he develops a crush on his next-door neighbor (Carey Mulligan) whose husband is incarcerated. Hubby (Oscar Isaac) eventually comes home from prison but is terrorized by goons. Gosling offers to help – and that’s when trouble starts.