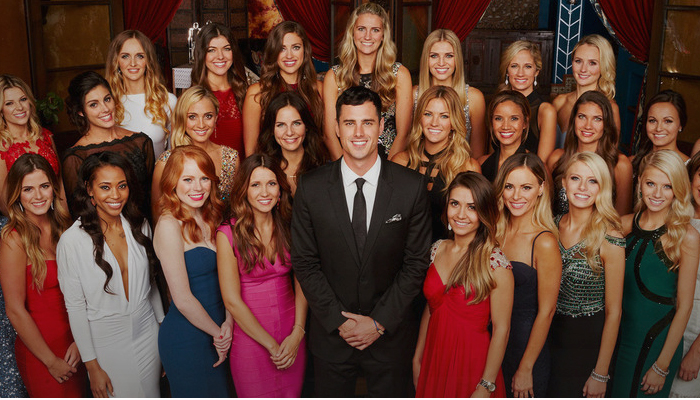 Monday night’s Warriors-Cavs game certainty didn’t live up to the hype. But you know what show never disappoints? Here’s a hint: it features 25 women clawing over one man. Also, lots of talk about cankles.

The first two weeks of the Bachelor were pretty bland, at least compared to what we’ve seen in the past. Yeah, eight of the original 25 women searching for love — and, you know, fame — were sent home. But there was no major drama.

Boy, did that change this week. The episode kicks off with Ben going on a date with Lauren B. Nearly half of the other ladies were sent to the Los Angeles Coliseum to play soccer with Alex Morgan. Ben seemed to enjoy that. A lot. It was kind of weird actually.

Tried our best to help out @benhiggi dates in the soccer department. Tune in to @BachelorABC to see the outcome

Then he went on a date with Jubilee. He seemed to enjoy that, too, but in the way a friend loves hanging out with another friend. And somewhere in there Olivia’s ugly toes and bad breath became a topic of the conversation for the rest of the house.

Yep, the claws were out this week. All in all, it was a nearly perfect episode.

So, with that said, here are this week’s Bachelor Power Rankings following what was, without a doubt, the top episode of the year thus far.

I wish I was this happy after getting rejected. #TheBachelor pic.twitter.com/25XnwLYKZe

Then again, you can’t argue with her fortune cookie tattoo.

Goodbye, Lace, here’s hoping you follow your ink’s advice and learn how to love yourself so that you can, one day, experience the joy of loving someone else.

1. Jubilee: You know how the Bachelor is full of catty ego-maniacs who’d claim they were falling for Ben Higgins even if he had the IQ of wall? Yeah, Jubilee’s a bit different, and not just because she’s a darker pigment than almost every other girl to have ever appeared on the Bachelor. If Marco Rubio and Mitt Romney had a love baby, he’d have more natural charisma than Ben. Jubilee called him on this, and also had no problem opening up her personal vault. Who cares if it seems like Ben looks at her as the black friend he’s always wanted? One question, though: how can a Veteran be afraid of heights?

2. Lauren B: This week’s episode essentially was two different shows. The first half-hour featured Ben and Lauren making out in an airplane, a hot tub, at dinner. Pretty much everywhere.

Looks like Ben and @LaurenBushnell3 were kissing in plane sight of the others pic.twitter.com/LDFyUUHY6v

Not only has Lauren B established herself as the season’s top “Lauren,” no small feat, but she’s also made it clear she’s going to be a major player going forward.

The bachelor has me in tears. "Does things like that for me and no one else"

But these rankings aren’t just about who’s endearing themselves to Ben. Honestly, who cares about the whole love aspect of this franchise? What the Bachelor is really all about is watching a bunch of nuts become unhinged on TV, and no one this season is nuttier than Olivia. Case in point: the urge she had to pull Ben aside and open up about her cankles just moments after he revealed that a family friend of his had tragically died in a plane crash.

When your girl is complaining about her calves #TheBachelor pic.twitter.com/m4DQtqDdtb

4. Emily: She was the star of the soccer royal, which seemed to get Ben going.

Also, she lists her profession as a twin. Gotta get extra points for that.

5. Rachel: She got a rose, which is always good. But more noteworthy was her Willis Reed moment on the soccer field.

6. Amanda: Positioning herself as the emotional and understanding one. Made it clear to Ben that she was “there” for him. A very savvy move from this mother-of-two.

7. Becca: Was pretty queit this week, except for some whining here and there. But all season Ben has made it clear he’s into her. Look for her to climb these rankings soon.

8. Jennifer: We’ve heard her say, maybe, three words all year, and yet she keeps getting roses. You know why? Because Ben is extremely into her. Physically I mean. Don’t underestimate that. Right now Jennifer is the sleeper to watch out for.

9. Amber: Getting a rose from the group date is good. Throwing yourself into the middle of the house drama, well, not so much. Might explain why she’s the Julio Franco, aka, the veteran (and not the Jubilee kind) of the Bachelor, though.

10. Caila: Admitted that she just realized that this is a competition. Yeah, clearly not the sharpest tool in the shed. Then again, her Week 1 reveal that she dumped her longtime boyfriend because she fell in love while watching Ben on last seasons Bachelorette might have clued us into that already.

11. Jojo: Week 3 was a disappointing one for Jojo, who many experts pegged as a favorite moving forward. Let’s see if she can find her way back onto the screen next week.

12. Hayley: The other twin. Right now that’s how she’s known to Ben, too. Safe to say she’s on the hot seat.

Um, you’re a black girl on what is perhaps the whitest show on TV. I wouldn’t worry too much about the sticking out part.

2. “I’m not super into situations I’ve never been in before.”—Lauren B

Maybe joining a reality show where you search for a husband wasn’t a great idea.

3. “Its hard to have an open heart when you can see it being broken.”—Caila

My life motto: No one's looking out for you but you. If you want something done right, do it yourself. #TheBachelor pic.twitter.com/3uHjMvfsS2

Line of the Night, and maybe the season, right here. Maybe if Jamie dropped gems like these more frequently she wouldn’t be going home.