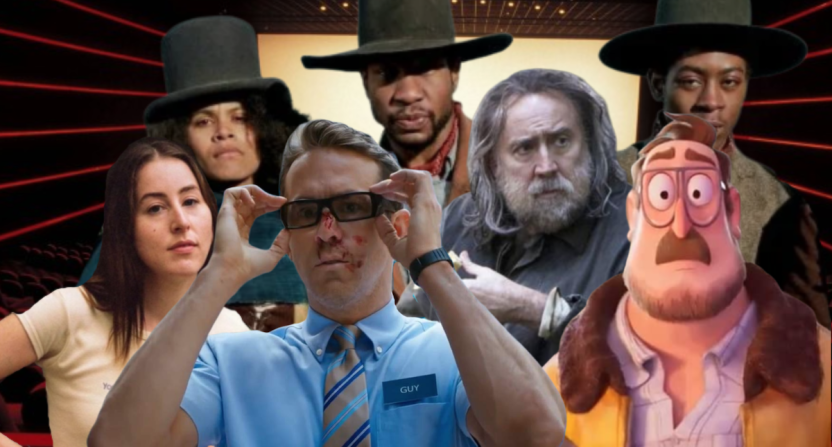 We have (sort of) returned to normal. But whether you went out to a theatre or chilled at home, there were several memorable films this year.

Here’s all you need to know:

The Eyes of Tammy Faye

Jake Gyllenhaal does all the heavy lifting. Starring as a cop who has been demoted to a 911 operator, he’s in almost every frame. Gyllenhaal is riveting as he tries to help a caller while awaiting a court hearing on police misconduct.

It can be difficult to portray larger-than-life figures. Often, Hollywood reduces them to caricatures. Chastain brings nuance to Tammy Faye. Her interpretation is complex and interesting. You can tell Chastain put in the work.

No actor made the most of limited screen-time than the immensely talented LaKeith Stanfield. He dominates every scene in a movie that also has male actors Idris Elba, Jonathan Majors, and Delroy Lindo.

You could go with either Mass actress Martha Plimpton or Ann Dowd. Slight edge to Plimpton, who feels like the film’s emotional core. She conveys so much seething anger as she struggles to find forgiveness in the aftermath of devastation.

Woody Norman, 11, is a British actor to watch. He’s extraordinary playing a quirky nine-year-old American kid who’s bonding with an uncle while his parents are away dealing with a mental health issue.

From the vibrant opening scene to the tragic ending, Steven Spielberg reminds everyone why he’s one of history’s greatest filmmakers. So many mesmerizing moments mixed with outstanding choreography.

The 9 most ridiculous things in the Fast & Furious’ F9:

9. Cipher imprisoned in a glass box.

6. The use of super-magnets to clear traffic.

4. Jakob drives off a cliff but is caught by an airplane.

3. Dom drives up a rope bridge while it’s collapsing.

2. Roman and Tej go to space in a rocket car and intentionally crash into a satellite.

A fight within the tight confines of a moving vehicle? At times, you wonder how they did it. The spectacular martial arts battle which takes place on a downtown bus reportedly took a year to make.

Best voice actor: Olivia Colman in The Mitchells vs. the Machines

Whoever came up with the idea to cast Oscar-winning actress Olivia Colman as an evil virtual assistant deserves a raise. She’s the best thing in this delightful feature. It’s so much fun to hear her erupt into a rage. Colman makes for a hilarious villain.

Chris Evans’s appearance lasts three seconds, but you’ll laugh a lot longer. According to CinemaBlend, Evans’ appearance was a spur of the moment decision. The entire scene took only five minutes to film.

Possibly the most unfunny Eddie Murphy comedy ever made. It’s joyless and lacks all the charm that made the original special. If you enjoyed it, it’s only because of nostalgia. The lone saving grace is scene-stealing Wesley Snipes.

A soulless money-grab by Disney. None of the characters are lieable. Not even Ellie Kemper. You’ll wince in agony at this unnecessary attempt to restart the Home Alone franchise.

Bruce Willis stopped caring a long time ago, but he takes indifference to the next level here. Not only does he look bored, but he mutters his lines as if someone just woke him up from a nap. Shame. Willis was once one of the biggest stars in Hollywood. Now he’s just mailing it in for a paycheck.

So bizarre. Adam Driver singing while performing a sex act is NOT the weirdest moment. Driver and Marion Cotillard are the parents of a …puppet baby. This wooden marionette is creepy. Despite it’s lovely voice, you expect this doll to jump off the screen and stab you in your heart.

I absolutely love the Annette soundtrack, especially this song, but oh lord I hate the movie.
I just could not get past the creepy doll. 😬 https://t.co/WWbjhox6Yv pic.twitter.com/KiacXiMEbN

If Dune were a TV series, the ending could be more forgivable. The story just abruptly pauses. Like director Denis Villeneuve suddenly realized the run-time was approaching three hours and said, “Screw it. Let’s stop it here and pray for a sequel.”

Most depressing: The Card Counter

Most card-playing movies are sexy, fun, and thrilling. Think Rounders or 21. Films with big stakes that keep you entertained. William Tillich (Oscar Isaac) has PSTD and guilt about his time in the military when he participated in the torture of prisoners at Abu Ghraib in the 2000s. This movie is bleak.

Most entertaining documentary: The Lost Leonardo

The story of The Lost Leonardo unfolds more like a thriller than a documentary. It’s an unbelievable tale about how a painting purchased for $1,175 wound up becoming the most expensive painting ever sold ($450 million).

Best use of a song: So What’cha Want by Beastie Boys in Vacation Friends

A solid buddy comedy starring mismatched friends John Cena and Lil Rel Howery. One of the best comes when they accidentally eat psychedelic mushrooms and start hallucinating. This scene plays homage to the 1992 classic video.

Worst (major) goof: The omission of Neil Peart in Count Me In

Count Me In is a Netflix documentary about rock drummers. It’s perfectly fine except they left out somebody. How can you make this film and not even mention the late, great Neil Peart? He belongs on the Mount Rushmore of percussionists and influenced an entire generation of drummers. #Boo.

Just caught the “Count Me In” drumming doc on @netflix. I kept waiting for them to mention Neil Peart. And they never did. How is this even possible? pic.twitter.com/lW0BPJuOSL

Cruella is, or at least aspires to be, a British movie. It takes place in London. Most of the actors (except for Emma Stone) are British. The fashion, the scenery, the accents are all supposed to be British. And yet, when Estella/Cruella steals a car, the steering wheel is on the left (American) side.

About halfway through Cruella, which has been great so far, but why is this steering wheel on the left side in London…? pic.twitter.com/CW1CKduqni

Florence Pugh is a delight in everything she does. Most surprising is her passable Russian accent. Accents can go horribly wrong. See Jennifer Lawrence in Red Sparrow.

Two Academy Award nominated actresses are in this ridiculously awful film. How did Melissa McCarthy and Octavia Spencer get talked into this unfunny mess?

Best plot twist: The Power of the Dog (No spoilers)

The Power of the Dog will be nominated for a bunch of Oscars. A very good film about toxic masculinity. What makes it work is an ending you’ll never see coming but makes perfect sense in retrospect.

From the start, we know an experiment is going on.  We know that the protagonist seems to be haunted by a killer imaginary friend. But good god, the plot twist is gross.

In case you haven’t figured out that the main character is racist, the film doubles down by having this item in her bathroom. Even the most hardcore white supremacist would not own this. Just dumb.