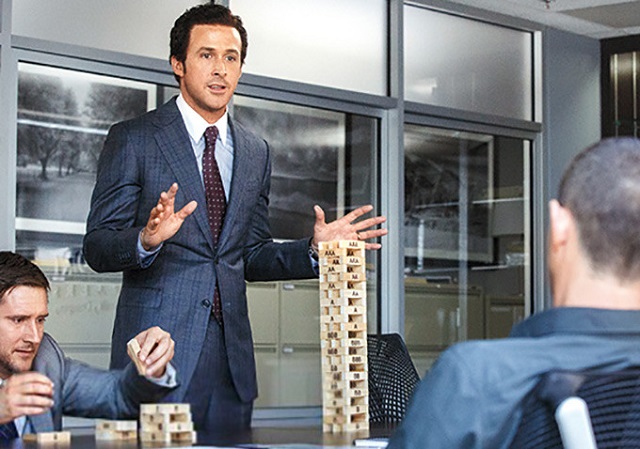 When the U.S. economy began its collapse in the fall of 2008, I remember talking to someone who worked as a financial adviser. “The media’s blowing this whole thing out of proportion,” he said. “It’s not nearly as bad as they’re making it out to be.” I asked him if that’s what he really believed or what the institution he worked for was telling him to convey to clients.

This person and I don’t get along very well, and I believe that dislike began here. He was either lying or just didn’t know what he was talking about, and he didn’t appreciate being called out on it. To be fair, I have no idea just how much he knew or knows about credit default swaps and collateralized debt obligations (CDO).

But that’s part of the point of the entire housing bubble and the economic crater that occurred when it burst. Everyone involved was too busy making money off peddling garbage loans to people who couldn’t afford them and spinning those debts further and further out until they could no longer be sustained. Very few people knew what effect these predatory loans built on a foundation of virtual tissue paper would eventually have on the U.S. economy. As The Big Short explains, only a handful of financial visionaries realized what was going to happen and watched the world nearly burn down.

Based on the book by Michael Lewis, The Big Short takes a story that seemingly wouldn’t translate well to the screen and distills it down to its most important elements and characters. Lewis followed more people involved in the building of the housing bubble and the credit default swap market created to capitalize on its collapse. Obviously, a book has more space and time to tell different stories and pull various threads out as far as they need to go. 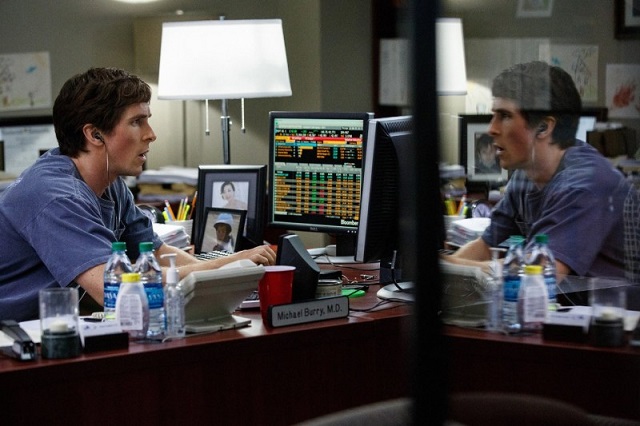 Director Adam McKay (Anchorman, Step Brothers) and co-writer Charles Randolph focus on a few key players, each of whom plays a different role in this narrative. To paraphrase Fargo, some of the names have been changed at the request of the survivors.

Dr. Michael Burry (Christian Bale) is the hedge fund manager who realizes that subprime mortgages will eventually fail and then essentially bets against them by creating credit default swaps with several banks all too eager to take what looks like a sucker investment. Jared Vennett (Ryan Gosling) is the trader who becomes aware of Burry’s move and makes his own bets against the housing market, bringing in other investors to fund those swaps. Mark Baum (Steve Carell) is one of those investors, a hedge fund manager who’s become increasingly disillusioned with Wall Street and how the rich prey upon the poor.

I’m not even sure I got all of the details right in that last paragraph. This is complicated stuff, made deliberately so to confuse and deceive the public. So there is a lot of information and industry jargon that is difficult to convey during The Big Short‘s two-hour run time. But McKay certainly tries to make this as accessible as possible, amusingly using Margot Robbie, Anthony Bourdain and Selena Gomez acting as themselves in virtual sidebars to explain exactly how credit default swaps, CDOs and synthetic CDOs to the audience work through examples such as using old fish for a new fish stew or betting a blackjack hand.

Do these tutorial interludes, along with Gosling breaking the fourth wall to talk to the audience, ultimately work? That might depend on whether or not you have a passing familiarity with the story to begin with. These things can only be simplified so much (and I heard a couple of people say the movie was “tedious” on our way out of the theater), but McKay certainly deserves to be commended for the effort.

The writer-director already showed his disdain of Wall Street and passion for educating the public in 2010’s The Other Guys, which dealt with a billionaire CEO defrauding investors and pension funds to keep his banking firm afloat. The comedy included a memorable closing credits sequence full of animation and graphics meant to inform the audience of the unethical practices banks were committing and how executives lined their pockets with the bailout money provided by the government.

Obviously, this is a story that really stoked McKay’s creativity and he seized the opportunity to tell a real-life story instead of creating surrogates for a different film. But his comedic touch, along with a talent for snappy writing and quick pacing makes a tricky story like The Big Short more digestible for a mainstream audience.

What also helps is the outstanding cast McKay has assembled to portray his characters, recite all of that financial jargon and make this material entertaining. We’ve seen the fast-talking asshole stockbroker in movies before. But Gosling plays that role so damn well. Yes, Vennett is greedy as hell and attempting to get rich at the expense of the U.S. economy, but his honestly makes him a very reliable narrator for the story. Even if he’s playing a version of the character he played in Crazy, Stupid, Love (which, interestingly, also co-starred Carell), Gosling shows here that he needs to do more comedy. More this, less Only God Forgives, man.

Carell puts a new spin on that Wall Street archetype. He’s loud, aggressive and overbearing, and always has his cell phone pressed to his ear. But Baum is more complicated than that. He’s the stand-in for the audience, constantly asking traders, investors and lenders to explain an industry and market that he can’t understand because it defies logic and is completely fraudulent. Even if he profits enormously from the collapse of the housing bubble, he knows it came at the expense of thousands of millions of innocent people who were duped. It’s a showy performance (coming with a noticeable weight gain), but it’s the best work Carell has done on film. (And I really liked Dan in Real Life.)

Bale has compiled a career of challenging roles and Burry gives him a fascinating personality to portray. The neurologist turned financial analyst is a brilliant mind, so preoccupied with numbers and problem solving that he really has no aptitude for social situations. He’s a wonderfully quirky character with a glass eye and bad haircut, who doesn’t wear shoes, doesn’t often change clothes and is somehow able to focus while playing speed metal really, really loud. (And as a former drummer, I was impressed with Bale rocking out to Pantera on a kit.) Another actor would have made Burry a caricature on the Asperger’s spectrum. In Bale’s hands, he’s a guy who sees things differently and is waiting for everyone else to catch up.

The Big Short certainly won’t make you feel better about what happened in 2008, especially since its after-effects can still be felt today. (The various title cards that explain what happened to many of the parties involved might make you want to throw your popcorn at the screen.) In some ways, it’s a story that’s too painful to relive because we’re still pretty close to it. And maybe that’s what prevented me from fully enjoying it.

If you like watching smart people at work, along with the witty banter and frenetic pace that McKay and his cast create, The Big Short is worth your time. I just wonder if it might ultimately be more enjoyable at home, when you can rewind to catch the details you missed or need repeated. It’s possible that this is a movie which will be more appreciated years from now when the sting isn’t so palpable.