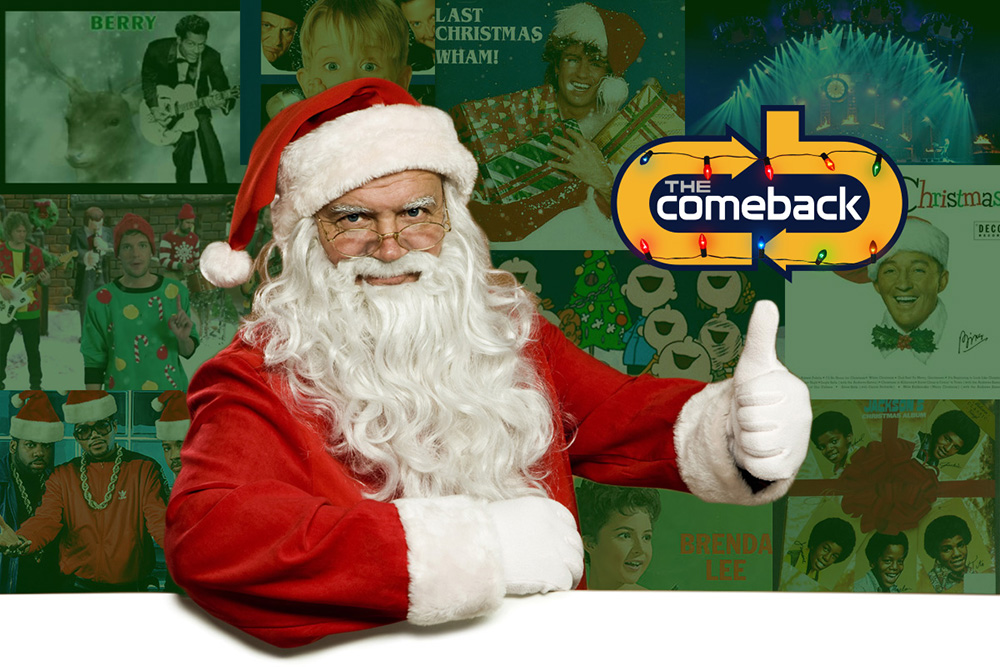 Are you hosting a Christmas party this year? Did you sign up to be the DJ for your office holiday get-together because your secretary Kathy, who only asks about your kids so she can tell you about hers, downloaded Lou Monte’s Christmas to play on repeat? Are you looking for a little yuletide cheer on your ride to work and are tired of the same three songs played on repeat?

We at The Comeback are here to help! Our gift to you, friends, neighbors and readers, is our ultimate list of Christmas songs, curated by our writers and editors. Listen, download, sing along, share with your friends and loved ones (and Kathy’s kids, obvs) and Merry Christmas.

Up on the Housetop – Jackson 5 (recommended by Dan Levy)
Mowtown Christmas songs are better than anything else, and the Jackson 5 had a handful of amazing Christmas tunes to choose from. Why this song? It’s not their most memorable one, but I find myself humming this every year…in July.

Don’t Shoot me Santa, by The Killers (recommended by Liam McGuire)

There’s only one answer here. This is such a ridiculous, unexpected song – it’s perfect for the holidays. – Joe

We’re a Couple of Misfits (recommended by Alexander Goot)

“We’re a Couple of Misfits”, from Rudolph the Red-Nosed Reindeer.  I’ve always had a soft spot in my heart for this one, I think because of the part of me that still feels sometimes like I don’t fit in. My favorite rendition comes from Moe,, one of my favorite bands.

“Come On! Let’s Boogey to the Elf Dance!” by Sufjan Stevens (recommended by Michael Grant)

This is an easy song to embrace even after the holidays are over. It’s silly, fun and has an old school sensibility. Plus, who can resist the lyrics: “Hijack a snow plow?”

The song is timeless and instantly brings back feelings of childhood as well as one of my favorite Christmas movies of all time.

Maybe it’s growing up in the upper Midwest or having a grandfather with a voice like Bing’s, but Christmas isn’t the same without this song or snow. It may not be a hip, recent sing, but it is a timeless classic and Bing did it best.

Favorite Christmas song? How about none? If I have to choose, I’ll go with “Last Christmas” by Wham!

Irony around the holidays is the best, and you can’t get much more ironic than a punk band named Bad Religion doing a slamming cover of “Silent Night.” Despite the band’s name and the fact lead singer Greg Graffin is an atheist who wrote a book called, “Anarchy Evolution,” he’s also a former choir boy who enjoys singing Christmas songs. I once saw a Bad Religion show on Easter Sunday, but even that isn’t as ironic as this song and how rocking it is.

It’s not a traditional Christmas song, and I wouldn’t play it for family and friends or at a Christmas party. But no song gets me more excited during the holidays if I hear it on the radio or at a store. It reminds me of the music I loved growing up and gets me in the spirit.

As a person who deals with depression every holiday season, I try to avoid all Christmas songs, but the only one which truly can bring a smile to my face is Brenda Lee’s. Perhaps it’s the guitar riffs or it’s Brenda’s voice that’s reassuring. It’s a standard December in the Fang household.

I love most of their stuff, but this one’s particularly good.

Christmas is Coming by Vince Guaraldi (recommended by Kevin McGuire)

For me, now Christmas playlist is complete without a couple of tunes from the Charlie Brown Christmas special, but this one always seems to be overlooked and caught in the shadows of the signature and iconic Linus & Lucy. To mix things up with your Christmas playlist, throw this jazzy tune into the set and let the magical work done by Guaraldi on his keyboard get you going. It has always been one of my favorite tunes.

One bonus, and I didn’t know until today this is originally from a McDonald’s commercial, but if the holidays aren’t about abject commercialism, I don’t know what is. I’ve heard this song constantly on satellite radio this year, yes, but it’s insanely catchy and I can’t get it out of my head, so now I’m sticking it in yours!