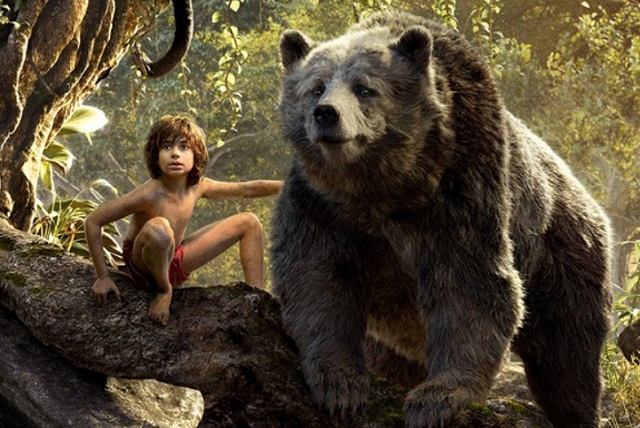 Fantastic beasts and where to find them? They can be found in The Jungle Book.

Jon Favreau’s live-action remake of the 1967 Disney animated film is a visual joy. This is one to see on the big screen, preferably the largest one you can find. It might be worth shelling out the extra cash for 3D and IMAX. (I didn’t see the film in 3D and often balk at that option. But I now wish I did and will go that way if — when? — I see it a second time.)

There are so many frames during The Jungle Book that are beautiful enough to make you wish for a remote control to stop the movie and appreciate what’s been created. Fortunately, those shots last just long enough to take in their beauty. Favreau knows that he and cinematographer Bill Pope (credit to editor Mark Livolsi too) know they’ve made some great stuff here.

The rational mind tells you that those lush jungle landscapes and the animals populating it were created by digital effects. The Jungle Book was filmed entirely on soundstages in Los Angeles. Given what’s on screen, that’s difficult to believe. It was kind of heartbreaking to learn that, yet also inspiring because the scenery — referenced from footage shot of locations in India — just looks so damn good. (I suppose it’s also reassuring that the movie’s young star wasn’t in any sort of danger.)

If you’ve seen the original animated film or read Rudyard Kipling’s source collection of stories, this new version will certainly feel familiar to you. (Admittedly, I neither saw the 1967 movie, nor read the book, so I went in relatively fresh. Though I recall much of the imagery from my childhood, along with some of the music. Maybe I did see it at some point when I was a kid…)

Young Mowgli (Neel Sethi) is a “man cub,” a boy raised by wolves when his loses his original family. Both the pack he grows up with and Bagheera (voiced by Ben Kingsley) the panther who brought him to the wolves to begin with have taught him the ways of the jungle, the code by which the wolfpack lives. But Mowgli has difficulty keeping up with the wolves and the ingenuity he employs to adapt (building tools to fetch water, for instance) are referred to as “tricks,” frowned upon by the animals.

However, Mowgli can’t deny his nature. And that’s exactly what the rest of the jungle fears. Even raised by wolves, the man cub will eventually grow into a man and assert himself upon the natural habitat. It’s inevitable that he’ll wipe out the jungle and the beasts that reside in it. Mowgli fights this notion, just wanting to fit in and grow into the only life he’s ever known. But will the rest of the jungle let him?

While the other animals view Mowgli as an outcast — he stands on two legs, after all — the most fearsome predator of the jungle has more deadly intentions in mind for the young boy. Tiger Shere Khan (Idris Elba) bears the scars of his encounter with man and wants revenge. He says he wants Mowgli cast out of the jungle, but it soon becomes clear he desires a far more savage outcome.

As the wolfpack, led by Akela (Giancarlo Esposito) and Raksha (Lupita Nyong’o), deliberate whether or not to keep and protect Mowgli, the boy decides it’s best for him to leave the jungle and return to man. Bagheera agrees to accompany him, rightly believing that Shere Khan intends to make sure Mowgli never makes it to the village where the humans live.

Mowgli’s journey toward the man village comprises the bulk of the story, in addition to the other animals he encounters along the way. Most notable are the python Kaa (Scarlett Johansson), who views Mowgli as young prey, and the bear Baloo (Bill Murray), who uses the boy to get him the beloved honey that he can’t reach. Baloo figures Mowgli can climb up the cliff to get the honey combs, but what he doesn’t count on is Mowgli using his tricks to get all the honey that the bear could ever want.

Is Baloo using Mowgli? Sure, but he also allows the man cub to live the life he desires. He gets to stay in the jungle, and better yet, he can develop more tricks and use his skills to build greater tools. Naturally, there wouldn’t be much of a movie — visual splendor aside — if that’s where the story ended. (Let’s watch Mowgli build a better honey trap for an hour! And I might actually watch that, just to hear more of Murray as Baloo.)

Mowgli either has to join his fellow man in the village, which Bageera still urges him to do. Or he has to stand up to Shere Khan, not just to liberate himself, but the rest of the jungle. One issue with the climactic sequence of the film is that it takes place at night, shrouding everything in darkness. I understand why that choice was made, given the instrument Mowgil decides he must use against Shere Khan (which is also responsible for the tiger’s scars), one which also threatens the entire jungle. But putting the action in the dark gives everything a murky appearance, making it somewhat difficult to follow at times.

More importantly, the nighttime setting undercuts the spectacular visual elements that made the rest of the film so enjoyable. As a result, the crucial confrontation ends up feeling like something that just needs to be slogged through, despite screenwriter Justin Marks creating a far more thrilling climax than was in the 1967 animated film. (OK, I watched that ending online.) 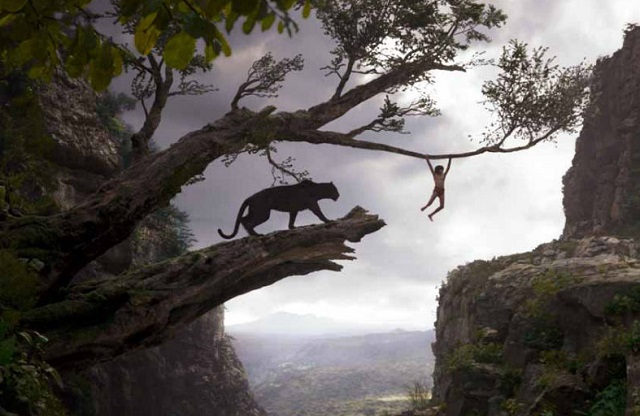 Ultimately, the story is rather incidental in The Jungle Book. It’s a delivery system used to take Mowgli through the jungle, where he can meet several dangerous beasts (as well as some mighty cute critters) and navigate along beautiful landscapes, many of which almost look like painted animated frames. (Actually, they probably are painted frames, aren’t they? At least digitally speaking.) As much as I love Iron Man, it’s not a stretch to say this is Favreau’s best film to date. (Disney must agree, since a sequel is already in development.)

But those images wouldn’t have life without the wonderful work of the voice cast. Among the standouts are Murray, who gives Baloo his mischievous and gentle soul, while Elba provides growling fury and menace as Shere Khan. You’ll probably recognize Garry Shandling’s voice as a porcupine, which adds a poignant note to a cute character. If there’s a misstep, it might be Christopher Walken as gigantic ape King Louie. Someone who can go from charming to threatening on a turn was surely the right choice for that role. I found his voice distracting, rather than adding personality to his character, but that’s probably nitpicking.

If you’re a fan of the original movie and book, I can’t imagine not enjoying The Jungle Book. The digitally created animals are a vast improvement on the hand-drawn animation (though there has to be a concession to nearly 50 years of technological advances in moviemaking), especially in making Shere Khan far more villainous. The CGI animation does look cartoony at times, notably with Baloo, but since he’s a cartoonish character, maybe we can let that one slide. Everything else in this movie just looks wonderful. Those who enjoyed the previous versions of the story will surely enjoy this with their kids who get to experience this for the first time. And second. And however many times all of you will want to see this again.