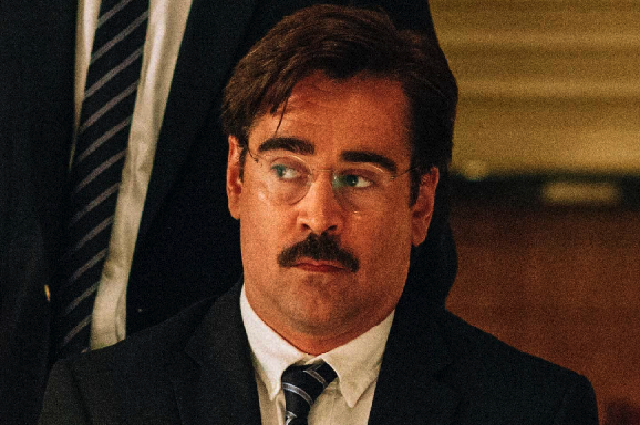 There may be no stranger movie currently in theaters than The Lobster. If you choose to see it, the film starring Colin Farrell and Rachel Weisz is likely the weirdest you’ll see this year.

But even though there might be times when you’ll wonder what exactly you’re watching and could have a hell of a time explaining to friends, family and co-workers what the movie is about, that shouldn’t scare you away from taking a chance on a creative premise and darkly funny commentary on couples in our society.

The Lobster could be described as a romantic comedy, albeit a very twisted one. Yet there are also elements of science fiction to the story. A sci-fi romcom? Well, sort of. The movie appears to take place in the very near-future. Or maybe the society in the film simply hasn’t advanced much past where we are now. But there are some extremely important differences.

Being single is not an option in this world — or more particularly, “The City,” where the story is set. Those without a partner are given 45 days to find one, or they will be turned into the animal of their choice. Really.

Upon breaking up with or losing a mate, people must report to The Hotel, where they have an opportunity to find a new partner on the resort grounds. Though guests are encouraged to fraternize with each other whenever possible and attempts are made to match people with similar interests — all while being reminded how miserable it is to be a single entity — Hotel management organizes events such as meals, dances and hunting expeditions to help people join couples again.

Speaking of those hunting trips, guests go into the woods to shoot “Loners” (singles who flee The Hotel and refuse to follow these oppressive rules of coupling) with tranquilizer darts with a rather important incentive. Those who catch a Loner get to add days to their stay and give themselves more time to find a new mate.

The script by director Yorgos Lanthimos and writer Efthymis Filippou doesn’t explain at which age this mandate applies. Presumably, teenagers and twentysomethings aren’t under such dire pressure to couple. Judging from the characters in the film, citizens must have a partner after at least the age of 30.

The title of the film comes from the animal that the main character David (Colin Farrell) chooses. Why a lobster? They have a an extremely long life span, live in the sea (which David has always enjoyed) and stay fertile for their entire lives. We never actually see one of the Hotel guests turned into an animal, only the final result, though there is a room where the transformation takes place. (David’s brother has been turned into a dog and accompanies him to The Hotel.)

Though the premise is extremely bizarre, it also provides an outlet for some extremely sharp and funny commentary on the importance that we place on people to be part of a couple — especially at a certain age. Of course, this isn’t just a pervasive societal pressure, but also a self-imposed one. How much of our lives do we devote to finding someone to avoid being alone, either on a short-term basis or to spend the rest of our lives with?

Other aspects of modern relationships are spoofed as part of The Hotel’s agenda as well. Guests seek to find any reason, the slightest commonality, for choosing a partner. Those who find someone to potentially be with are given time to develop their relationship, and if it doesn’t work, they’re given a child because that always helps matters.

While it may sound ridiculous to be forced to go to a place for six weeks in an attempt to find a mate, is it really all that different from going to a bar hoping to meet someone, or organized events like dances, speed-dating and singles cruises? And while the culture we actually live in might not be so outright about the hazards of being single, aren’t those without a partner generally frowned upon or pitied? At least we’re not forced to be turned into animals for remaining single for too long.

(Personally, I think I would choose a bear. Who messes with a bear? Although “The Bear” probably wouldn’t be as compelling or intriguing a title as the one Lanthimos went with.)

Ultimately, what makes this story palatable — and funny, for those who fall for its quirky charms — is the extremely appealing cast led by Farrell. Though he tries his best to look schlubby with an unfashionable mustache and a potbelly, Farrell gives his character an innocence that makes you root for him. Rachel Weisz plays the eventual object of David’s affection, someone who sees the world in much the same way. John C. Reilly and Ben Whishaw are also part of the cast as fellow Hotel guests, along with Lea Seydoux (Spectre) as the fierce, ruthless leader of The Loners.

Some people will see The Lobster and think it’s one of the worst movies they’ve ever watched. It’s a difficult story to get your head around and may often seem as if it’s being too deliberately strange. But I’m guessing there are plenty of people with a warped sense of humor and skewed view of relationships that will find this film clever and hilarious. This is a refreshing dose of originality during a summer movie season that’s gotten off to a disappointing start.