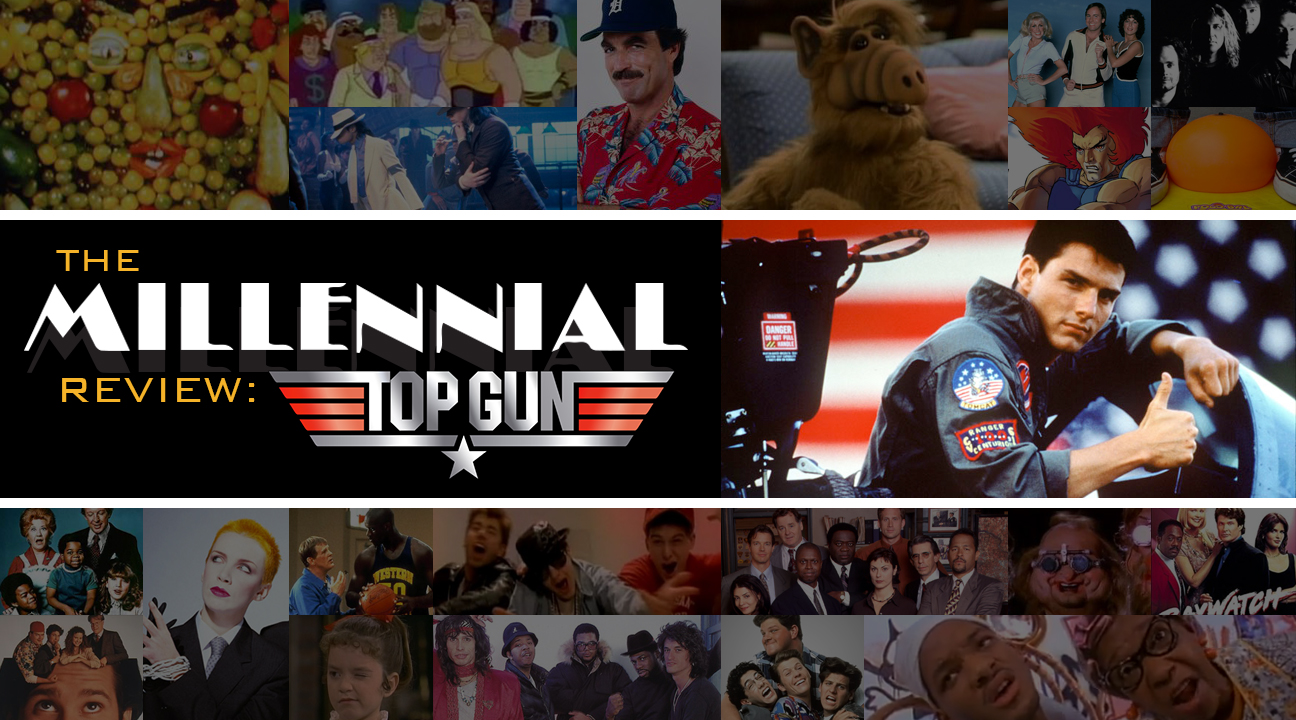 Welcome to our inaugural Millennial Review where we task millennials to review pop culture pillars from yesteryear. Below, Alex Putterman shares his thoughts upon watching Top Gun for the first time. We begin with an introduction from a previous generation for whom this piece of culture was particularly meaningful. 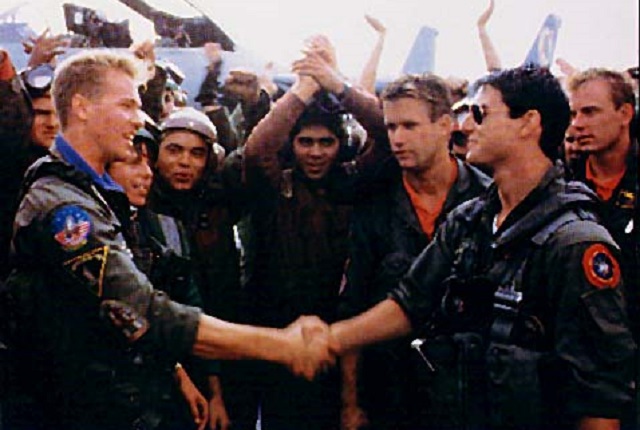 Released in 1986, Top Gun was a significant pivot for Hollywood. Most of the past decade focused on war films with the dreary topic of Vietnam. The Best Picture winner in 1986 was Platoon, with Oliver Stone winning Best Director. (Three years later, Stone won both awards again for Born on the Fourth of July starring… Tom Cruise!) Whether it was Vietnam fatigue, Cruise’s iconic status in the 80s, or just a deep thirst for a more patriotic, uplifting American war film, Top Gun would go on to be 1986’s highest domestic release, bringing in $178 million (nearly $40 million more than Platoon, which ranked third) while grossing over $350 million worldwide.

The film has stuck in pop culture with recurring airings on cable and frequent references in new shows and movies. The soundtrack held the top spot on the Billboard chart for five weeks in 1986 and spawned re-releases with additional songs in 1996 and 2006. A popular video game series, amusement park ride, a recent 3D re-release, and a planned sequel are further examples of the movie’s staying power and popularity that has spanned nearly 30 full years.

Just got back from a weekend in New Orleans to see my old friend @TomCruise and discuss a little Top Gun 2. pic.twitter.com/vA2xK7S7JS

How many people born in the 80s or before do you know who can name at least one or two songs from the soundtrack or rifle through a handful of quotes? “I feel the need… the need for speed,” “you never leave your wingman,” singing Jerry Lewis and The Righteous Brothers, and playing intense beach volleyball before a date is what best friends are for. Top Gun hasn’t faded like many action movies from that era and was selected for preservation by the National Film Registry last year as a “culturally, historically, or aesthetically significant” movie. Though the film’s staying power in pop culture seems to show no signs of aging, will younger generations respond to the same light-hearted patriotic exuberance that has been hard to replicate since?

The millennial perspective from Alex Putterman

Here’s what I knew about Top Gun before watching it for the first time Tuesday: airplanes, Tom Cruise, 1980s.

And having now watched the film, 30 years after it was first released, I can safely say its three most important characteristics were indeed airplanes, Tom Cruise and 1980s.

Let’s start with the planes, pretty clearly the coolest part of the movie. From Cougar’s near-disastrous run at the start of the film to Maverick and Ice’s heroic mission at the end, the flight sequences were pretty mesmerizing. I would’ve thought Avatar and Gravity and all the other 21st-century effects-first movies would have immunized me against the wonders of regular airplanes, but actually I found fighter jets pirouetting side-by-side pretty cool.

Now, did I always have any clue what was going on during the flight scenes? No, not at all. Maybe I’m dumb or maybe I have a millennial’s short attention span and was too busy checking Twitter to watch carefully, but after failing to follow the first few air sequences I resigned myself to sit back and just enjoy the planes looking awesome.

Things weren’t quite as exciting on the ground, where I pretty easily resisted the charm of Young Tom Cruise. Maverick was apparently intended as a lovable asshole, but to me, he was kind of just an asshole. Maybe that’s because as long as I’ve been conscious, Cruise himself has been less a movie star and more a tabloid personality who occasionally appears in mediocre action flicks. In Top Gun, I just couldn’t succumb to the charisma of the guy who made Knight and Day.

One thing Cruise did exceptionally well in Top Gun was sweat. The guy perspired like he was under a heat lamp. For half the movie, it looked like he had just gotten out of the shower (we’ll get to showers in a second). Cruise wasn’t the lone character in the movie with hyperactive sweat glands, but he was definitely leading the perspiration parade. 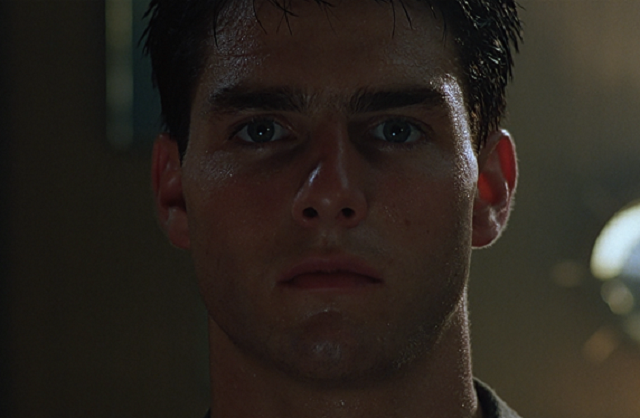 Of course, Cruise and company were at their sweatiest when they launched into an impromptu volleyball game. As far as I can tell, this scene existed only so Tom Cruise and Val Kilmer could show off their beach bods. I guess props should go to Top Gun and director Tony Scott for being the rare movie of any generation with more male half-nudity than female. Watching these shiny-bodied guys bat around a volleyball over goofy sitcom-theme-sounding music I couldn’t help but imagine all the GIFs and Vines that would come out of this scene in 2016.

The only narrative purpose of the volleyball scene was to get Maverick sweaty so he could go creepily ask his instructor to let him shower at her place. In a post-Bechdel test world, it was tough not to cringe at Maverick’s courtship of Charlie (Kelly McGillis). His flirtation strategy was basically, “storm in, act like an asshole, get the girl,” and of course, it totally worked.

Maverick (side note: Can’t they just go by their regular names? I feel ridiculous typing “Maverick” again and again) basically told Charlie he was going to win her over and kept being uncomfortably aggressive until he somehow succeeded. When Charlie raced through traffic to stare into Maverick’s eyes and tell him, “I just don’t want anyone to know I’ve fallen for you,” I totally cracked up, which probably wasn’t the reaction the filmmakers were going for.

All in all, the Maverick/Charlie romance was pretty ridiculous. In the characters’ first scene together, after Maverick has wooed Charlie with a flash mob musical and introduced himself as a pilot, we’re subjected to this exchange:

Charlie: Are you a good pilot?
Maverick: Yes
Charlie: Then I don’t have to worry about you making your living as a singer.

Fast-forward past the one-sided courtship and heavy-handed hook-up, and an awkwardly lit silhouette sex scene (NSFW?) provided the perfect climax for this relationship.

After surviving the romance of the first half of the movie with more than a few eyerolls, I found the second half pretty compelling. It took a while, but Maverick finally was given some depth, with his insecurities about his father and his trauma from the death of his good friend Goose (another side note: Why does one guy get to be “Maverick” and the other has to be “Goose?” That hardly seems fair). The main character’s shift from brashness to vulnerability two-thirds of the way through felt a little bit sudden, but by the end Maverick somewhat resembled a character worth rooting for.

Now let’s talk about Top Gun’s music. I mentioned before that this movie seemed defined by its time period, but when I think about it, there wasn’t much about it unique to the 1980s besides the soundtrack. The music, though, was about as 1986 as it gets, beginning with Kenny Loggins’ “Danger Zone.”

I’m convinced that the reason Top Gun resonates so much with people who first saw it 30 years ago is the degree to which the songs represent their moment in time. The music helps make Top Gun feel like a sort of time capsule. Well, that and these glasses. 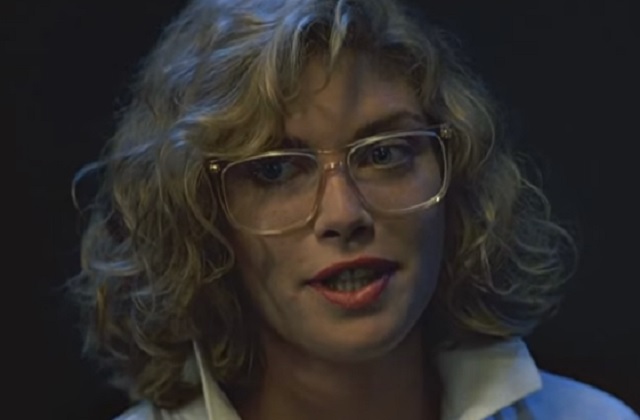 Overall, my Top Gun experience was enjoyable. It was a fun movie with enough drama to be compelling. I understand there may or may not be a sequel in the works, with Cruise reportedly returning to shoot down drones, but I’m not sure the world really needs that. “Top Gun 2” would have airplanes, but they might be less wondrous than in the original. The movie would have Cruise, but that means something different in 2016 than it did in 1986. And it would not have the 1980s, which takes away half the fun.