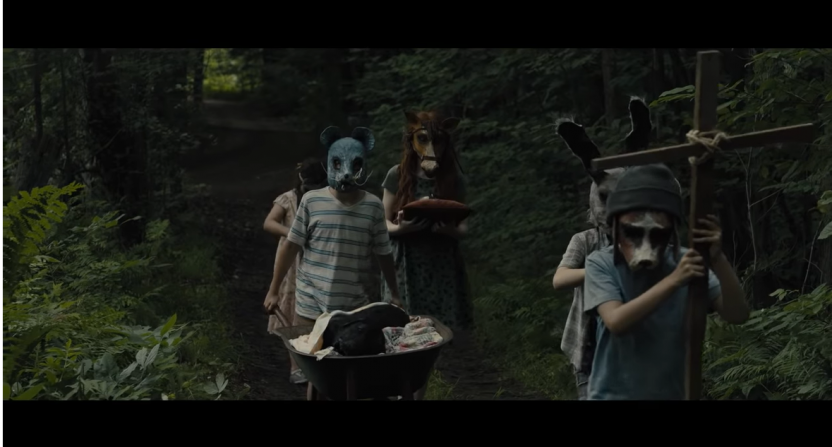 The new trailer for Pet Sematary dropped recently. The horror film is a remake of the 1989 adaptation of the Stephen King novel and is scheduled to be released in April.

As you may know, the track record on movies based on King’s work of horror is a mixed bag at best.

Of the old school movie adaptations of King’s work, the most effective include The Shining, Salem’s Lot, and Carrie. (We’re not counting The Shawshank Redemption, Stand by Me, or The Green Mile as horror). Among the worst: Sleepwalkers, The Dark Half, and the 2002 Carrie remake.

We can only hope that this latest version of Pet Sematary has similar success to the refresh of It, arguably the most entertaining movie of 2017.

Let’s get this out of the way: the original Pet Sematary is not a great film. There are visual effects that haven’t aged well. There are too many horror clichés. And there are plot points that make absolutely no sense. Namely, why would a doctor with two kids move his family to a house that sits right next to a dangerous road with speeding trucks?

Either he has a lousy real estate agent or he’s too cheap to pay for fencing. Worst. Father. Ever.

In the annals of King’s works, you’d be hard pressed to find a creepier story than Pet Sematary. We’ve seen the living dead before. People who become zombies, ghosts, and vampires are usual victims of circumstance. Sheer bad luck. Wrong place at the wrong time. In Pet Sematary, somebody is making a deliberate decision to put a deceased loved one in a cursed Indian Burial Ground that will turn them into the living dead.

Of course, in order to make this horrifying (and stupid) choice, one has to be burdened by overwhelming grief. The original Pet Sematary sets the stage for that grief.

The Creed family has just arrived in its new small town home in Maine (In the King universe, everything scary takes place in his home state). Louis Creed (Dale Midkiff) is a married doctor with a wife and children. Perhaps the most recognizable in this group is Rachel (Denise Crosby), who’s best known as Lieutenant Tasha Yar from Star Trek: The Next Generation.

Everything looks idyllic – except for those damn trucks! The semis often are responsible for a lot of roadkill (foreshadowing!). Conveniently, there’s a pet cemetery nearby – close to the Creed home. Hmmm. Nothing unusual about that. Curiously, the family doesn’t learn about this fact from the truly terrible real estate agent. (Doesn’t full disclosure apply here? Maybe not since the cemetery isn’t technically on the Creed property. Still…). It learns about this thanks to next-door neighbor Jud Crandall (the late and great Fred Gwynne) who provides needed exposition.

Gwynne is one of the best things about Pet Sematary. He was a gifted actor with excellent comic timing who starred in two 1960s sitcoms (Car 54, Where Are You? and The Munsters). He also famously was the no nonsense judge in My Cousin Vinny, delivering the classic line “What is a yute?”

In Pet Sematary, Gwynne utters the movie’s signature quote and one of the most iconic lines in horror movie history: “Sometimes dead is better.”

It’s so recognizable that it’s the (obvious) tagline for the new Pet Sematary.

Crandall reveals a terrifying truth about the cemetery. It leads to a place that can bring back the dead. Except they return in an evil, foul-smelling state. Of course, you might ask yourself: why would Crandall divulge such information that will undoubtedly lead to horrible consequences. Yes, it’s another case of people making horrible decisions in a horror movie.

Why would Crandall tell Louis Creed about the Indian burial ground? South Park poked fun at Pet Sematary for this.

Now, you can say maybe the movie is a metaphor for people continuing to make bad choices despite how obvious it seems. Or perhaps, Pet Sematary is more about the difficulty of dealing with the death of a loved one. It can be especially powerful and overwhelming when the death a) is a tragic accident and b) involves a child. There can be no worse feeling than burying a kid. It’s hard enough for most people to talk about death. It’s even more difficult when it happens under these circumstances.

When one of Louis’ children – Gage – dies, it starts a chain of event that lead to doom.

Pet Sematary, directed by Mary Lambert, is an unsettling movie to watch. It does an excellent job of building tension, even though – for the aforementioned reasons – you know where the plot is going. It remains legitimately scary in many scenes. The terror reaches its crescendo when Gage return. Never before has a child’s laugh or the words “Let’s play hide and go seek” sounded more chilling. Gage’s encounter with Crandall and Rachel is the stuff of nightmares.

Unfortunately, the rest of the scenes with evil Gage don’t work as well. The battle between Louis and the child looks ridiculous. Maybe it’s the limitations of special effects available at the time. Maybe there were budget problems. But it’s obvious that Louis is fighting with a doll. It’s the most laughably bad Stephen King movie monster moment since the werewolf in Silver Bullet.

The other part of Pet Sematary that doesn’t quite work is Pascow, the friendly ghost sent to warn Louis. When Pascow plays it straight, it’s fine. But there were a few scenes intended for comic reveal that aren’t funny and undermine the character. Was it really necessary to have him looming at a rental car counter or be at the door of a jet bridge?

Pet Sematary received mixed critical reviews when it was released in April 1989. However, it was a box office success. It was the No.1 film its opening weekend and eventually grossed $57,469,467. A nice investment return for a movie with a $11.5 million budget.

The remake of Pet Sematary should do well financially. There’s an audience for it. Hopefully, they will make the necessary plot improvements and tweaks like what we saw in It. The basic elements of a good story are there.

Sometimes dead is better the second time around.