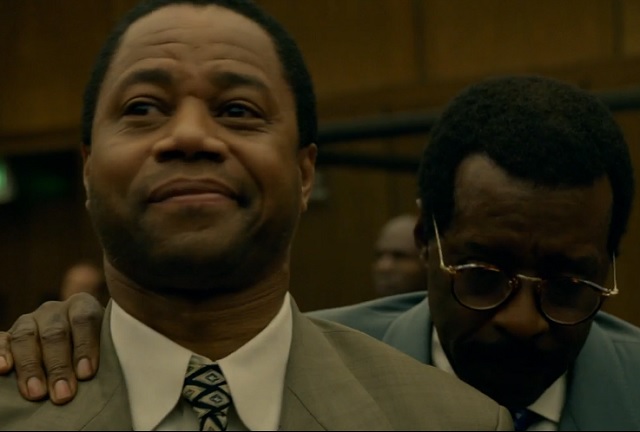 If all 10 episodes of American Crime Story: The People v. O.J. Simpson had been released at once, Netflix-style, for binge-watching, how many viewers would have gone right to the finale, much as you might go to the last chapter of a book whose ending you wanted to read right away? Other than the Bronco chase, isn’t the announcement of the verdict what people remember most about the Simpson murder case and trial?

For those old enough to recall it occurring at the time, the Simpson verdict was a “Where were you when… ?” moment. Where were you? Who were you with? What was the reaction? And perhaps most importantly, were both black people and white people in that setting?

The final episode of The People v. O.J. Simpson, titled “The Verdict,” was literally the one for which we’d been waiting through this entire series (season?). That’s not to say that the previous nine episodes weren’t extremely enjoyable and arguably some of the best television we’ve gotten during the first quarter of 2016. There was plenty of story to tell, characters to illuminate — perhaps redeeming or vilifying — and information to provide that wasn’t previously available (especially if you hadn’t read the source book, The Run of His Life, by Jeffrey Toobin or any of the others that resulted from the Simpson trial by lawyers and jurors).

This really was about the entire narrative — the “How did we get here?” — more than the ending. We can’t call the story’s conclusion a resolution, can we? Nothing was really resolved, which may have been an underlying theme of “The Verdict.” Obviously, there was no resolution for the Brown and Goldman families who watched Simpson get away with murder. Virtually everyone involved in the prosecution either resigned following the Simpson trial or had their careers adversely affected by the verdict. 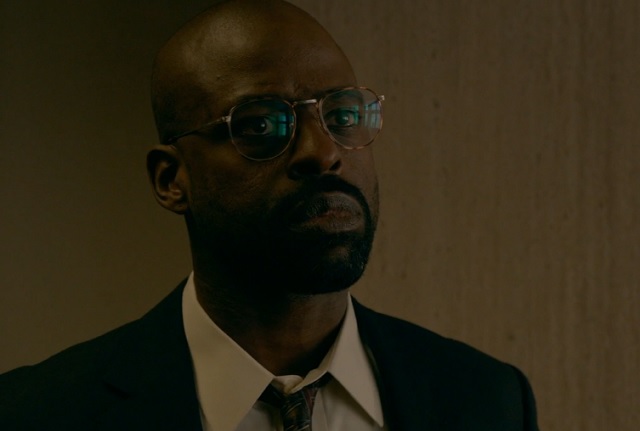 In one of the best scenes of the episode, Christopher Darden (Sterling K. Brown) points out to Johnnie Cochran (Courtney B. Vance) that he may have won a victory for his client and perhaps made race a more important topic of conversation. But by essentially getting the LAPD convicted, did he change future relations between the police and the black community? Could he actually have made things worse?

Maybe it was one last punch from Darden hurled at his former mentor, who wrecked his reputation as a lawyer and painted him as a traitor to his community. Darden can barely control his rage when the verdict is announced in court. As portrayed by Brown, you can literally see his temples throbbing. When he has to face the press following the trial, Darden can’t even finish what he’s saying before slumping into the arms of the Goldman family he failed by not convicting Simpson.

Of the main players in this drama, Darden was arguably the most tragic figure, the one who needed to get as far away from this whole damn thing as possible. Though he may have been right about Mark Fuhrman, pleading with Marcia Clark to not use the racist detective as a witness, he’ll always be the guy who pushed for Simpson to try on those leather gloves in court. 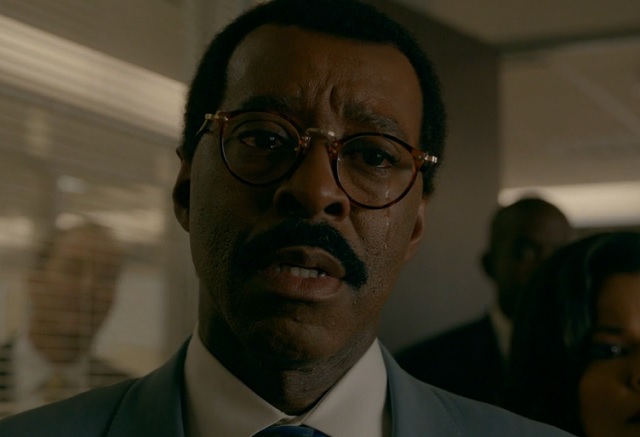 If there was a victor, of course, it was Cochran. He always viewed defending Simpson as an opportunity to put the LAPD on trial, to earn some payback for the Rodney King case, to shine a light on race relations in this country — especially in regards to how black people were treated by the police — and make them part of the national discourse.

Though Darden’s words to him may have had the sting of truth, Cochran receives affirmation when President Bill Clinton talks about the Simpson verdict, acknowledging that people view the country differently based on their race and need to talk to each other to understand those differences. Cochran defended a guilty man and earned acquittal for a murderer. But he accomplished his objective, exposing the racial divide that far too many people were unwilling to discuss. What would Cochran think if he was still living today, with those differences possibly as sharp as ever and that conversation rife with tension. Would he still feel like he earned a victory?

Considering all that went into and surrounded this trial, it seems particularly preposterous that the jury reached its verdict in just four hours. There was so much to unpack — the physical evidence, the collecting of it, Simpson’s history of domestic violence with Brown, the racial component to the case — that deliberations had to have been expected to take at least a week. 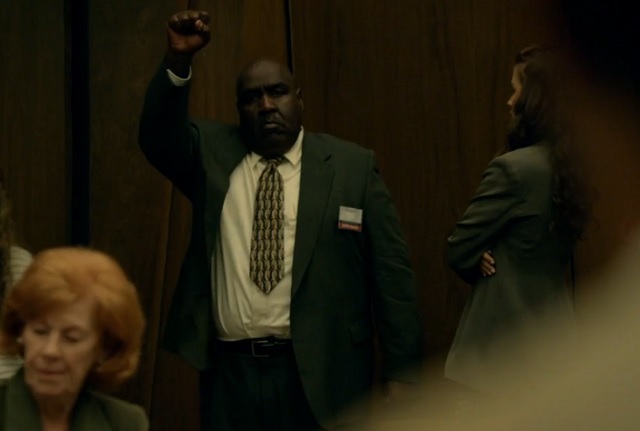 Yet for most of the jurors, their decision was already made before they even sat down at the table. As could be expected, the verdict was initially divided along racial lines. The most prominent white juror, the one the defense feared the most, pointed to the overwhelming blood and fiber evidence. But the black jurors felt that there was enough reasonable doubt because of the questionable conduct of the detectives and forensic team. To be fair, several pointed to physical evidence as well, citing the trace amounts of blood in the Bronco, the lack of defensive wounds on Simpson and, of course, those gloves not fitting. At least one admits to thinking Simpson probably did it, but the prosecution failed to definitively prove it.

When Judge Lance Ito gets the call that a verdict has been decided, he asks “You shitting me?” Robert Shapiro cracks that the jury has discussed the case less than anybody else in America. Clark and Darden hold onto the thin hope that a quick deliberation usually means a guilty verdict. Cochran draws the same conclusion and is outraged. However, as we know all too well, he had nothing to worry about. Simpson himself is told as much by a prison security guard who’s friendly with the personnel at the hotel where the jury’s been sequestered.

The show captures just how surreal it was when the not guilty verdict was announced. It was read so matter-of-factly that it was almost difficult to determine what happened without looking at the expressions of joy and relief on the faces of Simpson and his defense team. You could also hear the anguished cry of Ron Goldman’s sister, Kim, which is portrayed here. Of course, the real story may have been what was going on outside that Los Angeles courtroom. People throughout the country were tuned in to hear the decision. And when it was announced, many of the white faces looked shocked, angry and disapproving, while the black faces celebrated that someone had beaten the system.

“The Verdict” could have been an anticlimactic finale for The People v. O.J. Simpson. After all, we already know what happened (which was the argument some had for not watching the series in the first place). And really, what more was there than to hear the jury’s decision? Appropriately, however, that occurs about halfway through the episode. Because the real story of the Simpson verdict was its aftermath and the effect that decision had on everyone involved and a country that largely followed the proceedings closely. 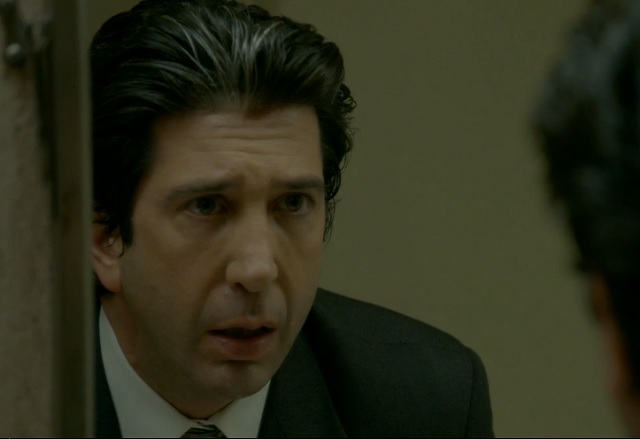 To a large extent, this final episode was a victory lap for the actors who did such great work in this series. We’ve gushed over the performances of Brown, Vance and Sarah Paulson in their portrayals, adding depth and understanding to people who were largely known only by their public personas and roles in this case. “The Verdict” also provided David Schwimmer with a final bow for playing Robert Kardashian, who stuck by Simpson only to eventually reach the disheartening, devastating realization that his friend had to have murdered his wife. Schwimmer had jokingly been recognized more for how many times he said “Juice” in the early episodes (and we considered running a count here, until it stopped being part of the show). But in this finale, we see a man whose soul has been eaten away, who no longer knows what to believe.

One thing that the writers try to make clear as the episode nears its end is that Simpson may have been found not guilty and was able to subsequently live as a free man. But he hardly went back to the life he had before June 12, 1994. Simpson misguidedly thinks he’ll be welcomed back to his posh Brentwood community, only to be greeted by protestors outraged that he got away with murder. He throws a party, but those in attendance just want to be part of a scene and celebrity moment. Simpson’s real friends are nowhere to be seen. The restaurant where he wants to celebrate wants nothing to do with him.

Is it small consolation that Simpson was convicted in the court of public opinion and lived as a pariah for 13 years before he was eventually jailed for another crime — robbery and kidnapping — and effectively served the sentence he should have all along? Surely not to the Brown and Goldman families. And the producers take steps to remind all of us that regardless of the circus that took place, two people were murdered and their killer was never brought to justice.

“What are we gonna do now?” Kim Goldman asks her father as they try to process all that’s happened. Those of us who have enjoyed this 10-episode series more than surely could have been guessed might ask the same question. Appreciate 10 great hours of television, and the writing and acting responsible for it. Season two of American Crime Story will reportedly focus on Hurricane Katrina, but has a high bar to reach and a tough act to follow.