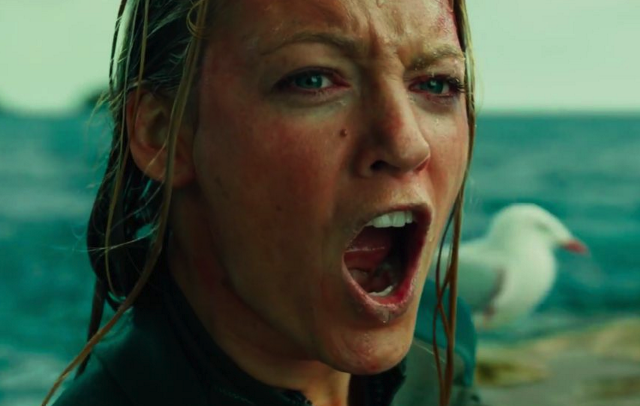 Putting The Shallows up against Independence Day: Resurgence on the same weekend was a savvy bit of counter-programming by Sony Pictures. A smaller film set on a tropical Mexican beach centered around one actor is an intriguing alternative to the big, loud, dumb spectacle of an alien invasion.

Most of the spectacle in The Shallows comes from the tropical setting. The beach (which was actually filmed in Australia) looks magnificent, with nearly white sand contrasting with the sharp blues of the ocean, dotted with lush greens from the surrounding jungle. Large parts of the movie could be a vacation video; you might want to schedule a vacation after watching some of this footage. It looks great on the big screen.

But for most of the film, director Jaume Collet-Serra (Non-Stop) and cinematographer Flavio Martínez Labiano keep the picture focused on star Blake Lively. The camera is either close up to her face or lingers on her body as she sits on the beach, wades in the surf and lays on her board. That probably gets gratuitous at times, but Lively is wearing a bikini with a neoprene surfing top in tropical climates. The camera can’t exactly avoid showing off her body, even if it sometimes takes a leering path along the scenery.

Besides, The Shallows doesn’t really have much of a story, so it has to rely heavily on its on-screen imagery. Yes, this movie is sold as Lively vs. Shark, but it’s more about Lively vs. Herself (especially her left leg, after the shark bites a huge gash in her thigh) and Lively vs. Her Surroundings. The shark is undoubtedly a presence — though often unseen, except for that fearsome fin — always looming in the water as a fatal threat. But the suspense and thrills come more from the tension created by fear and uncertainty.

The water that was originally supposed to be escape now represents danger. Actually, that applies to the entire secluded beach setting. Lively’s character, Nancy, is running from a life that has suddenly become too difficult, trying to find answers by connecting to the best moment her dead mother ever experienced. Yet running away has also left Nancy far away from anyone or anything that might be able to help her. Don’t worry; there’s no message in that. It’s just an attempt to add a little bit of depth to a relatively selfish, hedonistic pursuit.

That’s about as deep as The Shallows ever gets. Maybe that’s as deep as the movie needs to get. It’s a story about a woman who takes a vacation that goes badly. There could be something underneath about overcoming the difficulties that life can throw at a person — notably a leg that’s on the verge of gangrene, yards of ocean between her and the shoreline, and a big shark that wants to eat her — but Collet-Serra and writer Anthony Jaswinski never really go there.

That’s not to say there aren’t some things which The Shallows does very well. As mentioned earlier, Collet-Serra amps up the tension, even when there’s not much happening on screen. OH MY GOD, GIRL! DON’T PUT YOUR FOOT IN THAT WATER. High tide has never been more threatening. Solitude suddenly seems so lonely. You’ll feel the pain of improvised first aid. A dead, bloated whale has never seemed safer.

Collet-Serra should also be commended for not relying too heavily on the shark to provide thrills. This isn’t Deep Blue Sea, with an aquatic predator that’s monstrously large, able to swallow a human being whole, and can propel itself out of the water to ridiculous heights and distances. In terms of what’s seen on screen, the shark probably isn’t much scarier than what you’d typically see on The Discovery Channel during Shark Week. The director makes your imagination provide the suspense, and that restraint is a nice touch.

Additionally, Collet-Serra and Lively deserve some credit for getting a surprisingly good performance out of a seagull, doing so by just letting the bird be itself and not trying to make it too cute. (Thankfully, Lively doesn’t have too much expository dialogue with her new friend. This isn’t Tom Hanks monologuing to a volleyball.) Maybe we can get a sequel in which the seagull tries to reunite with Nancy in Galveston, Texas.

Perhaps I’m misguided for wanting a bit more out of a movie that doesn’t have more to offer. But I’m curious how many others won’t find The Shallows very filling after it ends. Lively gives a tough performance, especially when she gets tossed around underwater, having to carry the entire film by herself. Where this movie takes her next will be intriguing to follow. However, I’m not sure anyone who sees this movie will remember it by the end of the summer.