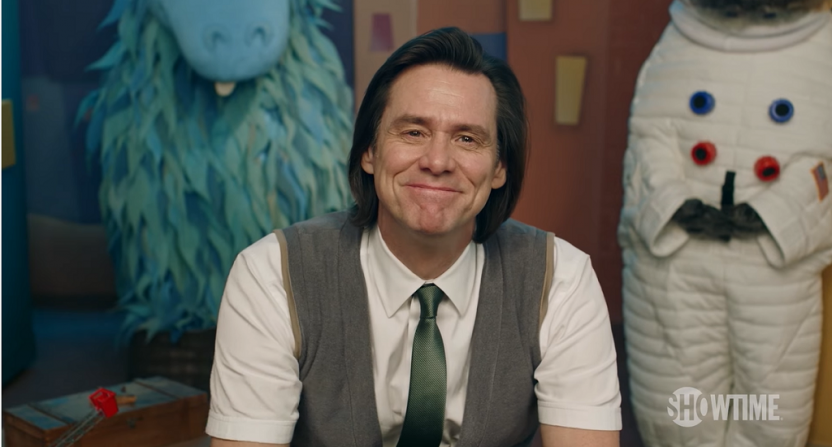 It’s hard to be taken seriously when one of your first jobs is making people laugh for a living. Comedians are rarely given their proper due. Somehow, some way, for some reason, too many people see comics as human jukeboxes uttering quips on demand and devoid of depth.

Few have transitioned into laudable dramatic actors. The best examples are Bill Murray, Robin Williams, Steve Carell – all of whom made their bones in comedy but went on to become Academy Award nominees. Williams, who studied acting at the prestigious Juilliard School, won an Oscar for Best Supporting Actor in Good Will Hunting.

One man who has not gotten his proper due is Jim Carrey, whose cable TV show Kidding debuts on Showtime this Sunday. You can watch an edited version of the first episode for free on YouTube.

Carrey has made boatloads of cash. His movies have grossed over $2.5 billion, making him one of the most bankable stars in Hollywood history. He’s still influential, with 17.9 million followers on Twitter. Though, these days his most noteworthy tweets are his own political cartoons.

Carrey doesn’t need the money or necessarily the attention. He seems to be doing fine. However, most artists do crave the respect of their peers and that seems lacking. Carrey became a star with his rubbery face, constant preening and his ridiculous funny movies (Ace Ventura: Pet Detective, Dumb and Dumber, Liar Liar, etc).

Because of these films, Carrey’s been easily dismissed as an actor. He’s never been nominated for an Oscar, despite four incredibly powerful performances. If you doubt his acting chops, you probably have never watched The Truman Show (1998), Eternal Sunshine of the Spotless Mind (2004), Man on the Moon (1999), or even I Love You Phillip Morris (2009). He won Golden Globes for The Truman Show and Man on the Moon.

Among those performances, Eternal Sunshine of the Spotless Mind sticks out. That film is the crowning achievement of his career. It might be the greatest relationship movie ever made and has been named one of the best films of its decade. It’s incomprehensible that Eternal Sunshine of the Spotless Mind never got a Best Film nomination and equally sad that Carrey wasn’t recognized (Kate Winslet earned a Best Actress nomination and Charlie Kaufman, writers Michel Gondry and Pierre Bismuth shared a win for Best Original Screenplay). Carrey and Winslet were both marvelous, but Carrey had the harder role. He’s the grief-stricken one and the film is told through largely through his perspective.

While the movie has elements of science fiction, everything else about the relationship between Joel (Carrey) and Clementine (Winslet) feels authentic. That’s not just the dialogue or Gondry’s wizardry as a director. It’s Carrey’s emotional and realistic portrayal. Apparently, he was channeling his own grief from a recent relationship.

That role might be Carrey’s crowning achievement. But that was a long time ago. Over the past decade, he has been seen less and less on the screen. Since 2011, he’s headlined just two major feature films. They were box office bombs: Mr. Popper’s Penguins (2011) and Dumb and Dumber To (2014). Another film, Dark Crimes (2016), had a limited theatrical release.

In recent years, Carrey has also dealt with tragedy, His girlfriend Cathriona White died of a drug overdose in September 2015. Her death was ruled a suicide. Carrey faced a wrongful death suit that was dismissed earlier this year.

For a while, Carrey disappeared from the public eye, saying he “didn’t want to be in the business anymore.” Instead, he focused on his art.

“I didn’t like what was happening, the corporations taking over and all that. And maybe it’s because I felt pulled toward a different type of creative outlet and  I really liked the control of painting — of not having a committee in the way telling me what the idea must be to appeal to a four-quadrant whatever.”

Now, Carrey is back. Returning to do a Showtime TV show is an interesting career move. It might be a smart one, because he’s reunited with the man who helped him achieve his greatest critical acclaim: Gondry.

In Kidding, Carrey portrays an iconic children’s TV show host Jeff Pickles (think of Mr. Rogers). Mr. Pickles dresses like a librarian and drives a PT Cruiser. He’s meek and has spent so much time around children that he sometimes fails to understand adult themes.

Mr. Pickles is a pleasant source of inspiration and happiness for his child viewers. But that’s becomes increasingly challenging after a family tragedy and the dissolution of his marriage. When Pickles approaches his executive producer Sebastian (Frank Langella) about a risky, unpleasant topic for the next show, Sebastian responds by saying:

“You need to understand something. There are two of you. There’s Mr. Pickles, the $112 million licensing industry of entertaining toys, DVDs and books that keep the lights on in this little charity of ours. And then there’s Jeff, a separated husband and grieving father who needs to hammer out a few dents in his psyche. And trust me, never the two should meet in order to prevent the destruction of them both.”

The show must go on.

It’s a cliché that the roots of comedy often come from a dark place. Sure, many comics have had to overcome personal troubles – but that just makes them like the rest of us. Comedy is hard and being funny with the expectation of being funny is daunting. The story of Carrey’s rise is well known. He was once homeless as a child after his father lost his job.

In Kidding, Carrey tones down his trademark histrionics. There’s a sad understandable darkness to Mr. Pickles. There are also funny moments but it seems like a slow descent to a mental breakdown. Any show needs time to establish and develop its characters.

Kidding is a dark dramedy that leaves you feeling uncomfortable at times. However, it’s also fascinating. It’s going to take a great actor to pull this off. Carrey is that actor.